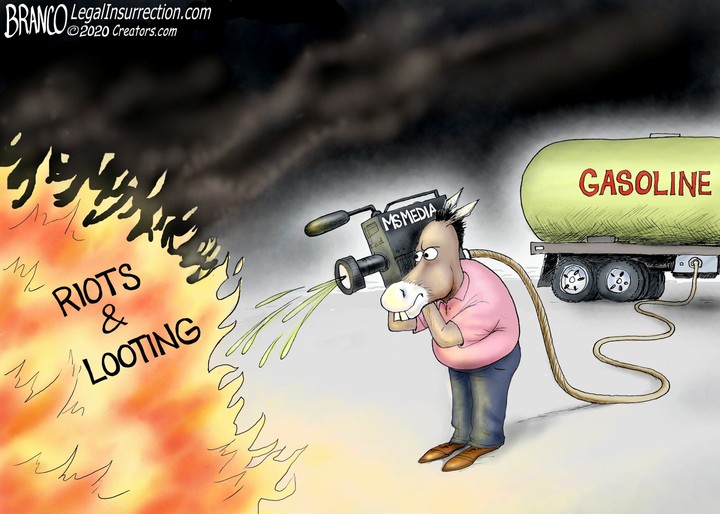 With the death of George Floyd -- a heinous atrocity virtually every American decries -- unity should have prevailed.

Instead, the country seems to be falling apart. That's because of the utterly chaotic political and media response to the Floyd tragedy: a response that demands agreement but, most of all, requires compliance. You must kneel.

You must kneel because you cannot understand. You simply cannot. If you have to ask for a definition of systemic privilege, we are told, it's because your white privilege has blinded you to reality.

If you point out that not all inequality is inequity, we are told, it is because your latent racism is leeching into your worldview. If you defend America's history, philosophy and culture -- or, G od forbid, her flag -- you must apologize. And, if Drew Brees is any indicator, your wife must also apologize, and your second cousin once removed.

You may not understand what is being demanded of you. You may see the wave of conflicting messages emanating from the press and wonder just what you're supposed to do. But the chaos is the point.

You are supposed to be confused. Confusion is a political weapon. Clarity is a shield. If our media and political class can prevent clarity, they can prevent unity; if they can obscure, they can demand acquiescence.

Thus, we hear messages that are obviously in direct conflict with one another. And, we are told, our inability to square those messages means that we must listen to the woke priesthood that can untangle these Gordian knots.

The only safe path, therefore, is parroting the messages of those initiated in the religion of wokeness. Thus, we hear that individuals ought not be held responsible for the sins of those in their racial group, and that's why it's so wrong for police to engage in profiling.

But we also hear that white Americans bear full responsibility for the sins of both modern racists and historic racists, and ought to atone on behalf of their race and their country.

And if you refuse, you must be considered racist.

Thus, we hear that the police are the greatest threat to black Americans, and that's why they must be defunded. But we also hear that police absence, a product of racism, created the conditions that originally led to higher crime rates in black communities. We can, therefore, blame the police for crime whether they're present or absent in minority communities.

You cannot, therefore, oppose rioting and looting too strenuously, lest you be labeled a racist.

Thus, we hear that COVID-19 is so extraordinarily dangerous that anti-lockdown protesters were endangering the lives of other Americans; in fact, they were racist, since COVID-19 has disproportionately affected minority communities. But we also hear that protesting racism is so extraordinarily important that we can freely ignore all restrictions surrounding COVID-19 -- and, indeed, that we have an obligation to do so.

Thus, we hear that journalists ought to be treated with the utmost respect because they are doing a difficult job and pursuing facts and the truth; and that harsh words spoken about journalists reflect underlying unease about freedom of the press. But we also hear that journalists are actually activists and thus have a duty not to be objective; op-ed editors should be fired for the sin of greenlighting pieces opposed by woke staffers.

In the end, our republic runs only so long as we're able to hold some semblance of logical conversation with one another. But the republic isn't running. Instead, we are battered with logically incoherent nonsense, a variety of messages that carry only one consistent bottom line: Shut up. Believe. Repeat.

The chaos of the moment isn't a bug; it's a feature.

And the more confused we are, the less we can possibly hold together, despite the fact that nearly all Americans agree on the most important issues.