Who else dares speak for the mistreated vegetables of CHAZ/CHOP? 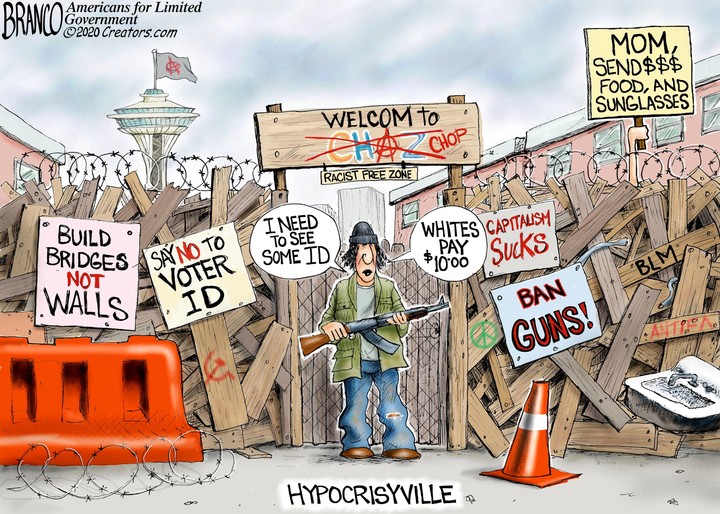 The last thing I need right now is to have my head lopped off by angry Jacobins of the cultural revolution over yet another column mocking CHAZ or CHOP or whatever they want to call that Leninist compound in downtown Seattle.

But I can't help it. I don't give two figs for the politics of the Chazistani, or if you prefer, Chopitistas. It's not their politics I find infuriating.

It's what they're doing to innocent vegetables that drives me mad.

Gardeners must have standards. Vegetables have dignity and must have water to drink. And I'm a gardener, or was, when I had my own backyard (wistful sigh). Now I live in a Chicago three-flat without a handful of dirt or a blade of grass to my name.

So take my head if you must, but first, let me finish this column about the dignity of tomatoes, cucumbers and various eggplant before I'm brought before Madame Guillotine.


After I see what they've done in Seattle, I feel like taking someone else's land, too, whether they like it or not, and growing tomatoes or cannabis on it, just as the good Chazistanis, or Chopitistas, are doing. And, like them, demand that taxpayers bring me snacks.

The bad part? They've taken over blocks of land in downtown Seattle that doesn't belong to them by force, just like those evil white Europeans of old. They've driven off the police. They have their own armed militia. They issue demands and still expect taxpayers to bring them clean port-a-potties and Gatorade. And, of course, snacks.

But every dark leftist cloud has a silver lining. At least they're trying to grow vegetables. They haven't given a name yet to their collective farms, or farmers, though I propose they call themselves kulaks.

The kulaks were expert farmers, once.

Yet whether they know what happened to the kulaks or not, the truth is that Americans grow weary of being screamed at. Many fear that their careers will be ended by the Jacobin-led cancel culture. Soon it will be time that all will be invited to bend the knee and take the soup.

But before soup time, as a gardener I must draw a line in the mushroom compost when I see the horrifying gardening photos smuggled out of CHAZ/CHOP.

It looks like they just poured dirt on top of cardboard, or on top of old social distancing markers (remember social distancing?) and just stuck a few tomato plants or weed seedlings in there. They didn't even water them. They're withering.

Vegetables are not leftist performance art. Vegetables die without water. I'm afraid they're using Brawndo for irrigation. No, no, a thousand times no. Brawndo is not good for plants. Plants need water.

Not all leftist gardeners in Seattle are anarchic buffoons. Some, like Marcus Henderson, do their best by the people's vegetables.

"It was real organic. I came here with a shovel," Henderson told the left-wing online site The Stranger, which I'm now checking religiously to make sure that Seattle's statue of Vladimir Lenin survives the current purge of history.

The statue was brought to Seattle after the fall of communism in the old Soviet Union, because, well, where else would it go? Lenin needed a home.

While some gardens in Chopistan are terrible, the one Henderson is in charge of seems decent enough, though he says he needs water barrels and irrigation tools.

Marcus? Excuse me, but how about a simple garden hose? Just sayin'.

Now that I'm without a garden, readers allow me to garden vicariously through the Coronavirus Victory Garden photos they're posting on social media. They're beautiful. And I thank you all.

But in these times of madness, even a gentle mocking of gardeners of the left, like the Chazistani (or Chopitistas), carries a cost. The slightest criticism of gardening technique is risky indeed. And during the frenzy of a cultural revolution, the tribunals of woke scolds are most unforgiving.

Victor Davis Hanson, the conservative classical historian and JWR contributor, explains that "once cultural revolutions turn anarchic and eat their own, they lose support. When quiet sympathizers conclude that they too may targeted, they turn on their former icons to survive."

Some liberal Democrats are slowly realizing the truth of this. Every day you see more of the fearful finding new witches to denounce. But before I find people or ideals to betray, my own head might very well be planted, as fertilizer, lonely among the kale and Swiss chard, with my soft, conservative hair blowing in the wind.

"John, there are times your back must ache after stooping so low as to pen such a snide, mindless and useless column," wrote Michael McAvoy after I last mocked the Chazistani.

I responded with three words: Lighten up, Francis.

He wrote back, "John, Serious question, in your response you referred to me as Francis â€¦ why? This is 2nd time this week someone responded to me and called me Francis?"

If only I had some Kipling in me, and had written him this:

If you can keep your head about you, when others are losing theirs; and all your vegetables count with you, but none too much; if you treat your tomatoes with kindness, and tame the zucchini vines and cucumbers, too, then yours is the garden, and everything in it.

And what's more, you'll be a gardener, my son.

But I just didn't feel like it. Besides, "lighten up, Francis" was easier.

So, take my head dammit. But don't forget, water the tomatoes.