The Base Gets Itself a New Elite 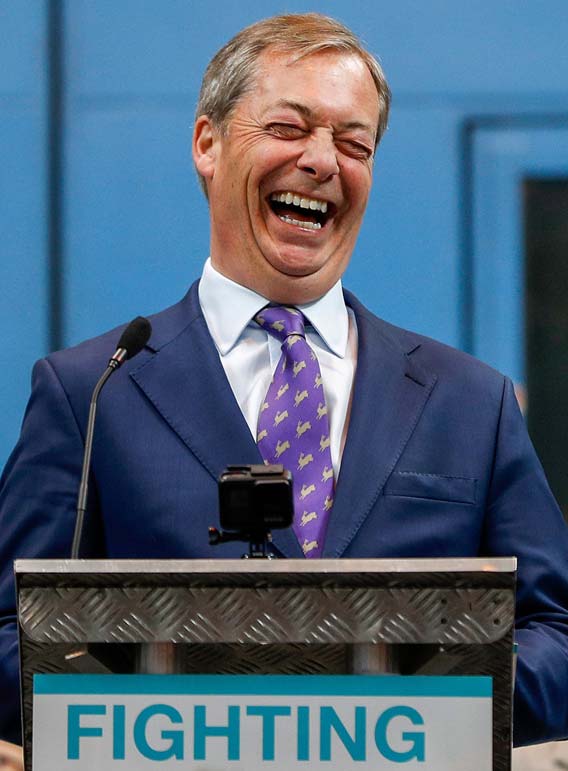 Win or lose, Farage enjoyed himself. Darren Staples for Bloomberg

In any normal UK election, it would be inconceivable for either of the two main parties - Conservative and Labour - to attract just 23 per cent of the vote.

The fact that that is all they could muster between them is hilarious, and greatly to be enjoyed. As I put it on the radio last week, the departing Theresa May has led the Tories to their worst result in two hundred years. But, really, that's praising with faint damns. I saw Daniel Hannan on the telly extending Mrs May's impressive feat back through the pre-Reform Act era and accounting it the Tories' worst result since 1678.

Which is kind of hard to spin.

Her forced resignation last Friday morning (by which point her party had made it clear they wouldn't stick with her past lunch) ensures that she and that election result will be yoked together for all time. And jolly well deserved it is.

When the party of government falls from favor, the beneficiary is usually the principal opposition. Instead, Jeremy Corbyn's Labour Party saw its vote fall almost as precipitously as the Tories'. Against the Conservatives' single-digit nine per cent, Labour could muster only fourteen per cent, its own worst result in a century - in fact, since 1910. Which would also be hard to spin, had Theresa May not done Corbyn the favor of pulling off an unbeatable record.

As I've been saying for four years in a Trump context, it's easier for the base to get itself a new elite than for the elite to get itself a new base. Three years ago the Brexit referendum revealed that Parliament and the people had become misaligned: If over half the people support a policy that no "mainstream" party supports, then in what sense are those parties mainstream? Mrs May should have enacted the people's wishes, exited the EU on WTO terms, left it largely to civil servants to smooth the technical adjustments, and then invited Brussels to take its time and make proposals for such new arrangements as they might wish to entertain. By now, Brexit would be receding in the rear-view mirror, and normal politics - that's to say, two-party Tory-Labour politics - would have resumed.

Instead, Mrs May in particular but also Parliament in general chose to double-down on the estrangement from the masses revealed by the referendum, and spent the next three years demonstrating that, whatever the Prime Minister had in mind when she first declared "Brexit means Brexit", it obviously doesn't mean leaving the European Union. Either through malice or stupidity or condescension, the political class opted to widen its breach with the people - and Nigel Farage, who is a very canny fellow, decided six weeks ago to create a party to fill the gap in a European election the UK shouldn't have had to participate in.

Listening and/or watching to the BBC on Sunday for as long as I could stomach it, I detected a strange urge to suggest that the Brexit Party had somehow under-performed, as though it's normal for a six-week-old party to win twenty-nine out of seventy-three seats, while the century-old Labour Party wins only ten, and the Tories four and the nearest Nigel gets to a run for his money is the second-placed Liberal Democrats with sixteen seats. Farage and the other officially pro-Brexit parties (Labour, Tory, Democratic Unionist) won 44 seats. The Lib Dems and the other officially Remainer parties (Green, Scottish Nationalists, Plaid Cymru, Sinn Fein, Alliance Party) got 29. Adding in the unelected UKIP and Ulster Unionists, the Leave share of the vote was 58 per cent.

Yes, yes, I know, that's a bit of a simplification, in that the Tories are supposedly pro-Brexit but totally bollocksed it, and Labour is only pretending to be pro-Brexit as part of a difficult straddle between its Old Labour working-class base and the New Labour preening metropolitan Euro-luvvies. Many of the latter - including such hitherto loyal champagne socialists as actors Simon Callow and Michael Cashman and even Blair's old Cabinet Secretary Gus O'Donnell. - flew Corbyn's coop and voted for the Lib Dems. Even so, for those demanding a second referendum (or, as they cynically call it, a "people's vote"), there's not much evidence for a second-time-around sadder-but-wiser Remain majority.

Among riven Tory families, Jacob Rees-Mogg's sister stood for the new Brexit Party while Boris Johnson's sister stood for the equally new "Change UK", a militantly anti-Brexit party formed by a coterie of disaffected Remainer media self-promoters of the soft left and soft right. Annuziata Rees-Mogg was duly elected in the Farage surge, while Rachel Johnson flopped out because "Change UK" had barely any statistical support outside the more desperate bookers of telly current affairs shows.

Perhaps the contrasting fates of these two "new forces" serve between them as a proxy second referendum: while a Euro-mulligan may have its appeal to the Remainers, a fierce, seething, implacable sense of betrayal is surely an even stronger motivating factor, as Nigel's turnout demonstrated.

One notes also the difference in the names: "The Brexit Party" states the party's sole policy and entire raison d'etre; "Change UK" is some exhausted marketing man's idea of branding - vague, woozy, pretentious, pseudo-high-minded misty water-colored euphemistic evasion designed to obscure the fact that you have no ideas of your own except vehement opposition to the change the British people actually voted for. If Change UK survives beyond next month, I'll be impressed.

Can my old boss Boris Johnson save the day for the Conservatives? Nigel regards him as a slippery duplicitous opportunist. On past form, Boris will pledge to deliver if necessary a no-deal Brexit and then screw everyone over, as is a Tory's wont. Farage, by contrast, is the most consequential British politician of the past quarter-century, and he's never got anywhere near the Palace of Westminster, never mind the Cabinet table. To repeat what I wrote six years ago:

[Nigel Farage] understands, too, that, unless you lead the stunted, reductive lives of the lifelong residents of the Westminster village, political success doesn't necessarily mean being in government, or even getting elected. Farage is a close student of the near-total collapse of the intellectually bankrupt Canadian Conservative party in the early Nineties, and its split into various factions. The western-based Reform party could not get elected nationwide, but they kept certain political ideas in play (which moved the governing Liberals to the right) and eventually enabled them to engineer a reverse takeover of the Tory party. UKIP, likewise, is keeping certain important, indeed existential questions in play, and it's not inconceivable that Farage, who regards himself as a member of 'the Tory family,' could yet engineer a reverse takeover of whatever post-Cameron husk remains half a decade down the road.

Farage thinks the Canadian moment may be upon us. Had Parliament reflected the people, there would have been a pro-Brexit party and a pro-EU party. The former would get almost all the Tory vote plus the Old Labour working-class redoubts and most Ulster Unionists. The latter would get New Labour, the Lib Dems, the Greens and the Celtic nationalists. After Sunday, neither Her Majesty's Government nor Her Loyal Opposition has any motive to seek a sudden general election, so it is likely that they will simply sit tight, resume the subversion and contempt of the last three years and get back to widening the chasm between themselves and the people. Which means that when the election does come it will be even easier for the electorate to do as they did last week and cast them aside.

If Conservative and Labour wanted to go back to old-school business-as-usual Conservative-Labour politics, they would implement Brexit tomorrow and move on. The longer Brexit paralyzes UK politics, the more irrelevant the old two parties will seem.