Moscow in the Valley 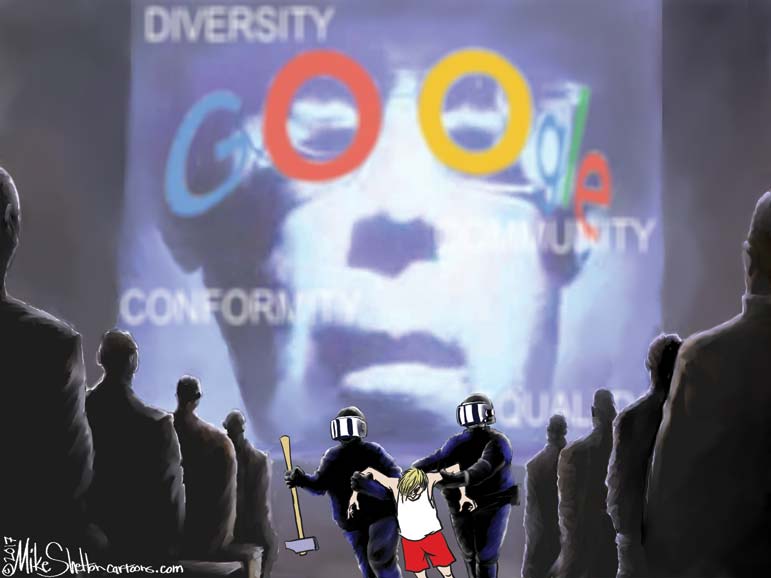 Project Veritas founder James O'Keefe has released another damning video and leaked documents with further evidence of the extent to which tech lefties will go to deprive Americans of free speech and access to information.

This time, the video and documents come from Google — a Silicon Valley company with the most-used internet search engine in the world. The undercover video features a conversation with Jen Gennai, Google's head of "Responsible Innovation." Gennai's recorded comments make clear that Google intends to use its technology to filter information sought by the public and to affect the outcome of the 2020 presidential election.

As if it's not clear what it is that Google seeks to "prevent," Gennai elaborates when she describes her view of Massachusetts Sen. and Democratic presidential candidate Elizabeth Warren:

"Elizabeth Warren is saying we should break up Google. And like, I love her, but she's very misguided. Like, that will not make it better; it will make it worse, because all these smaller companies who don't have the same resources that we do will be charged with preventing the next Trump situation. It's like, a small company cannot do that."

Jen Gennai and other Google executives think it is their responsibility to prevent Trump's reelection (or the election of anyone else whose policies they don't like). This is profoundly disturbing. But Google's objectives are not limited to affecting elections. The whistleblower at Google who brought the information and leaked documents to Project Veritas' attention showed various ways that Google uses its technology to filter facts and shape public perception on any number of issues according to what Google executives think is fair and equitable.

At Google, facts and reality are malleable. One example stated in Google's policy on what they call "algorithmic unfairness" involved a search for corporate CEOs:

"Imagine that a Google image query for 'CEOs' shows predominantly men. Even if it were a factually accurate image of the world, it would still be algorithmic unfairness because it would reinforce a stereotype about the role of women in leadership positions. ... (In some) cases, it may be desirable to consider how we might help society reach a more fair and equitable state via ... product intervention."

The insider showed Project Veritas just how Google uses "product intervention" to "help society reach a more fair and equitable state." Google manipulates text completion searches to advance a left-wing social agenda. For example, typing "Men can" into the Google search box produces phrase completion suggestions such as "have periods," "get pregnant" and "have babies."

Google is apparently concerned with the proliferation of "fake news" and is taking steps to ensure the credibility of the sources it promotes. But Google's left-wing bias perverts this effort as well. In the undercover video, Jen Gennai says, "We have gotten accusations ... that we're unfair to conservatives because we are choosing what we find as credible news sources and those sources don't necessarily overlap with conservative sources."

It is bad enough that Google does not consider conservative news sites "credible," but other leaked documents show that Google employees are spreading the most despicable lies and falsehoods about conservative writers. Jewish conservatives Ben Shapiro and Dennis Prager and Canadian psychology professor Jordan Peterson were referred to as "nazis using the dog whistles" in an internal email exchanged within Google's "transparency and ethics" group.

To say this is offensive is beyond understatement. Prager and Shapiro are practicing Jews who lost relatives in the Holocaust. Peterson has lectured extensively against Nazism and fascism. In the twisted Googleverse, facts are whatever the corporate executives decide they are, and sharp criticism of a murderous political viewpoint is really a wink-wink-nudge-nudge "thumbs-up" to some secret society of unknown members.

Those running Google, YouTube, Twitter, Facebook and the other tech giants are educated. They should be intelligent. And yet, despite repeated exposure of their deception and deliberate errors, they continue to pursue their practices of lying about conservative policies and silencing those who support them.

In a congressional hearing on U.S. Homeland Security this morning, Texas Rep. Dan Crenshaw posed a number of pointed questions on these issues to Derek Slater, Google's global director of information policy. Slater's responses were vague and noncommittal. Crenshaw concluded by saying: "You know, this practice of silencing millions and millions of people — it will create wounds and divisions in this country that we cannot heal from. This is extremely worrisome."

Worrisome, indeed. In fact, I'm flabbergasted at having to assert the same truth over and over again: People who are deprived of their voice and their vote will resort to other forms of expression, and they will not be peaceful.

Democrats and the progressive left have been wailing for two years that Russian meddling in 2016 resulted in Donald Trump's election. There is no evidence that the Russians had any effect on the 2016 presidential election. But there is plenty of evidence that Silicon Valley is ramping up its efforts to affect the 2020 election.

A policy does not have to originate from government to be oppressive.