The Great Fire of a New London 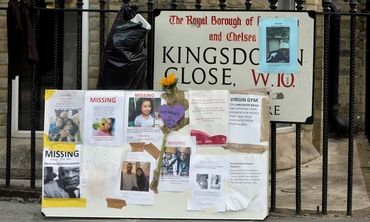 No black detail is too absurd for today's world. And so it happens that the first named victim of the towering inferno in North Kensington is Mohammed Alhajali, a Syrian refugee who arrived as a teenager with his brothers in London four years ago and somehow wound up being housed in a flat in Grenfell Tower. Launching a fund to raise money for his funeral, Kareen el Beyrouty, director of the Syria Solidarity Campaign, declared that "Mohammed Alhajali undertook a dangerous journey to flee war in Syria, only to meet death here in the UK, in his own home. His dream was to be able to go back home one day and rebuild Syria."

Which is apparently a lot safer. His friend and fellow Syrian refugee Abdulaziz Almashi tells the BBC that "Syria is a war zone. For six years I've seen videos of shelling of buildings. I've never seen a building in Syria burn like this." Back in the war zone, Mohammed's mother is planning to undertake her own dangerous journey to London to visit her surviving boys and bid farewell to the son who found freedom and was consumed in the flames: "At least I can see his grave, I can kiss where he's buried."

As anyone who's traveled the Third World or even parts of post-Soviet Eastern Europe knows, it is easier to put up a tall building than to maintain it. Authoritarian regimes like the prestige of skyscrapers, even stubby ones, but you notice around dusk that there are no lights on the upper floors because the elevators no longer work; the landings in the emergency stairwell are used as "temporary" storage space that has inevitably become permanent. Not all of these problems are yet as common in a First World city such as London, but some are: at Grenfell Tower, for example, the only emergency exit was obstructed inter alia by piles of cardboard, a busted space heater and an old mattress. Other problems not quite seemly in a supposedly wealthy metropolis had also accumulated - so there were no sprinklers, and non-working fire alarms, and "cladding" from a recent remodel helped fan the flames and spread the fire and quickly became, for those seeking an issue in a tragedy, the word of the week. Nevertheless, clad or unclad, Grenfell Tower embodies what has happened to London, Paris and other European cities in their transformation from national capitals to "global cities", as Sadiq Khan likes to call his fiefdom.

Contemporary London is like the old New Yorker ad of a Broadway marquee boasting a critical rave - "Fun for Young and Old!" - and underneath a dissatisfied middle-aged man exiting the theatre. Europe's "global cities" are for the very rich and very poor, and the middle class are exiting the city. The Royal Borough of Kensington and Chelsea, wherein Grenfell Tower is located, is also home to thousands of ambitious young French people fleeing the economic sclerosis of their own country, to the point where London is now "France's sixth-biggest city". But, as Le Monde recently pointed out, in London the average monthly rent (ÂŁ2,600) is higher than the average monthly salary (ÂŁ2,300). As with Paris, it is increasingly a city for the super-rich, and the poor who serve them. Or come to serve them, but wind up on welfare as aunts and cousins make their way to join them.


The Royal Borough of Kensington and Chelsea is a microcosm of the general landscape in a way that no other part of London can quite match. The average salary in the borough is ÂŁ123,000, the highest in the land. But the median is ÂŁ32,700 - and, as the BBC reports, the gap between those two indicators is the widest of any borough in the country. So you have Kazakh oligarchs and Saudi princes - and then Grenfell Tower. The immediate vicinity is supposedly among the "most deprived" ten per cent of English neighborhoods, but within a few yards dwell telly presenters and other minor celebrities all out in force in the early hours of Wednesday morning uploading the conflagration in their midst to their Twitter feeds. If you've been following our daily serialization of H G Wells' classic The Time Machine, it all had a very Eloi-and-Morlocks quality to it - a bifurcated humanity in close proximity but with entirely separate housing arrangements: in one world, the economy hums along on selling undistinguished row houses back and forth for ever more preposterous seven-figure sums; in the other, a lower order is warehoused not (as in Wells' world) underground but in the sky, in packed and teeming turrets - where there is nothing to fear but (as in Wells) fire.

Oh, to be sure, wealthy Londoners now live in the sky, too. In the transformed scrub behind Kings Cross Station, where 20 years ago the poxiest whores on the planet plied a cheerless trade, a two-bedroom flat now costs ÂŁ2.1 million, and downstairs in the pedestrianized plazas free chamber-music recitals accompany your macchiato in a faintly contrived cafe life whose ersatz quality is nevertheless diligently maintained. Not too far from Grenfell Tower, a block of similar height has gone up in Merchant Square: the penthouse sold for ÂŁ7.5 million; there are no mattresses blocking the stairwell. For moneyed Londoners, the word "flat" still has pejorative associations, prefaced too often with the qualifier "council" - as in an early hit co-written under a pseudonym by our old friend Leslie Bricusse:

My Old Man's A Dustman
He wears a dustman's 'at
He wears gorblimey trousers
An' he lives in a council flat.

Grenfell Tower was a block of "council flats" - or "public housing", as they say in America. So for the luxury sky palaces the term "apartment" seems to be preferred - as in that evocative lyric by the BBC's Eric Maschwitz in "These Foolish Things": "A tinkling piano in the next apartment..." Not a lot of those in Grenfell Tower.

And thus the bifurcated London of early Wednesday morning, where Londoners with Anglo-Celtic-European names watched as those with Arab and African and Asian names were consumed by the flames. In Kings Cross, a ÂŁ2.1 million two-bedroom flat will be occupied by a two-salary couple with one designer kid or a home office. In Grenfell Tower, the arithmetic gets a bit more haphazard. The building contained 120 flats of either one or two bedrooms, and supposedly more of the former. Yet there were reports that over 600 people were present. It seems unlikely anyone will ever know for certain - at least compared with, say, who died in what street on which night during the Blitz. But the desperate fliers pinned to street railings tell their own story:

No one has heard from 16-year-old Nurhuda El-Wahabi, 21-year-old Yasmin El-Wahabi and their family. They live on the 21st floor. Please spread this round and keep a look out for their family.

"The Choucair family is missing in the Grenfell Tower fire. They lived on the 22nd floor."

The family was named as mother, Nadia Choucair, and daughters Mierna, 13, Fatima, 11, and Zeinab, three.

When the world comes to Mayor Khan's "global cities", this is the only way it can afford to live there. Last year, across town on the outer reaches of the District Line in East London, I took a stroll along streets of terraced houses marveling at the garbage piled up in the small front yards, far beyond what one would expect a "three-bedroom" house ever to be able to generate and certainly beyond the capacity of traditional municipal trash collection - those dustmen in gorblimey trousers. My expert local guide could tell from the mountains of detritus which addresses were ad hoc lodging houses for transient Romanian laborers and which were the compounds of vast extended families of fecund Bangladeshis. But in neither case do terms like "one-bedroom flat" and "three-bedroom house" have the same meaning they do for those marketing the delights of 3 Merchant Square.

"Merchant Square" is one of those names the realtors like - conjuring the solid, substantial ground on which the great mercantile "global cities" arise. "Grenfell Tower", on the other hand, is almost too English. The most famous Grenfell of all was Joyce, whose comic monologues and songs ("Stately as a Galleon") delighted British audiences until her death, in the self-same Royal Borough of Kensington and Chelsea, in 1979. I suspect that this Grenfell Tower was probably named after one of Joyce's cousins-by-marriage, the politico-banking-poetry-military Grenfells, as in the bankers Morgan Grenfell and the late Lord Desborough, whose obituary The Times accidentally published a quarter-century before his actual death. Elsewhere in the city, the tower blocks reflect the livelier preoccupations of local activists - "Winnie Mandela House" - but in Kensington and Chelsea even the eyesores evoke an older London.

And so, two days after the appalling conflagration, the great aged Queen comes to visit the survivors - like a scene from Joseph Roth's magnificent novel of the Hapsburg twilight, Radetzky March, in which the ancient Franz Josef tours a far-flung corner of the Crown Lands where the only Austrians are the soldiery. Here, though, the far-flung corner is a stone's throw from Buckingham Palace, and the only Englishmen are among the emergency services. In Roth's tale, no one can quite divine what's going on in the Emperor's head, just as no one quite knows what's going on in the Queen's: They are older than everyone else around, and they remember things that no one else does. Perhaps Her Majesty thinks back to those nightly Luftwaffe bombs, when nevertheless London bureaucrats could reliably tell you who had lived and who had died, or perhaps she goes back further, to the slums of Dickens' day and the Victorian reformers who labored to eliminate them, and wonders how it is that they seem to have arisen anew, reaching to the sky and teeming with peoples from every corner of the earth.

In the "global cities", someone has to foam the latte, and maintain the Tube tunnels, and clean the hospitals - and there are no Londoners or Parisians left. And so, in a real-estate market where (as Le Monde joked) the cupboard under the stairs Harry Potter's uncle locked him in is now a seven-figure "studio apartment", the great remorseless migrant tide crams ever more densely and perilously into the space that is left. And official London turns a blind eye - and moneyed London, media London, banking London is barely even aware of the favelas and shanties arising in their midst. That mattress blocking the emergency exit? Next time round there'll be children sleeping on it.