Israel is not guilty 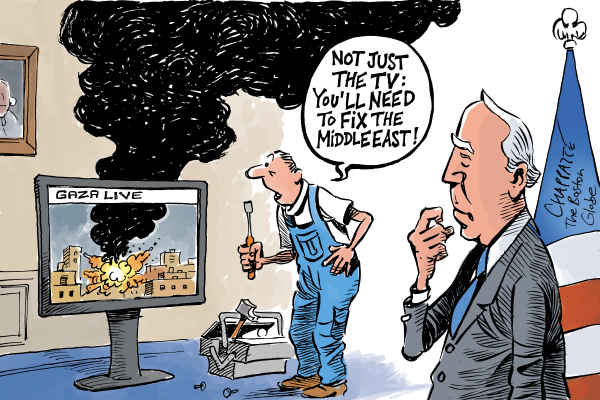 But then, the Palestinians have been playing this game for decades even as people have said Israel should not shoot back because, for one thing, Israel now has what's called the Iron Dome, a protective system that takes out thousands of the Gaza Strip's rockets with thousands of its own. Critics have then growled that Israel kills more civilians than Hamas and doesn't need to. It would in fact be insane for Israel to just fold its hands and wait for the worst to pass.

An inhumane terrorist trick, after all, is to use civilians as a shield, to launch weapons from schools, for instance, so as to thwart return damage to the launching mechanisms. Failing to destroy those mechanisms has a price, and is Israel supposed to just yawn when a 5-year-old Israeli boy gets killed in his aunt's apartment? Applaud as living conditions are devastated by shrapnel? Shrug its shoulders when a block of homes is destroyed?

Egypt arranged this peace agreement that may or may not last, and congratulations. But meanwhile Israel's critics should understand that Palestinians do not recognize Israel as a nation, and that Yahya Sinwar, the Hamas leader of this stretch of land between Israel and Egypt â€“ 25 miles long and 6 miles wide — once made it clear that, in his mind, the issue is not whether Israel will be wiped out. The issue is when that will happen.

There have been Israeli-Palestinian wars aplenty, and Hamas is not without allies, such as Iran, which helps supply weapons as part of its ambitions to conquer the whole Middle East, murdering the innocent with its usual enthusiasm.

President Barack Obama's nuclear deal with Iran made its conquest of others more likely and President Donald Trump not only took the deal apart but helped initiate the Abraham Accords through which Israel began to fashion closer relationships with Arab countries. President Joe Biden has sought to reinstitute and reshape the nuclear deal, and Iran is slaving away to enrich uranium sufficiently to make nuclear weapons.

After World War II, Israel was lucky to have a good, strong Western friend, namely Britain, which worked with the United Nations to strengthen Israel's hold in the Middle East and facilitate expansion as immigrants poured in from all over owing to anti-Semitic torture, including the Holocaust.

A war ensued as Arabs tried to hold back this idea and Israel was able to keep land it had been granted as well as take some land granted to the Arabs. There have been other wars, all kinds of negotiations, varied agreements and no end to terrorism. It's not as if Israel has never taken wrong steps, but a chief objective has been self-defense and preservation of what is seen as a sacred land while its chief enemies have often been evil, totalitarian dictators mistreating their own people.

Israel has established alliances with Egypt and Jordan and lately with other Arab nations understanding that Iran is their enemy and Israel a valuable trade partner with needed military muscle. A major Trump step was recognizing Jerusalem as Israel's capital, something Obama once endorsed and apparently forgot.

Israel is important to the Middle East's future, the United States is important to Israel's future and we should be careful not to open the door and let wisdom walk away.