Yes, we have no collusion 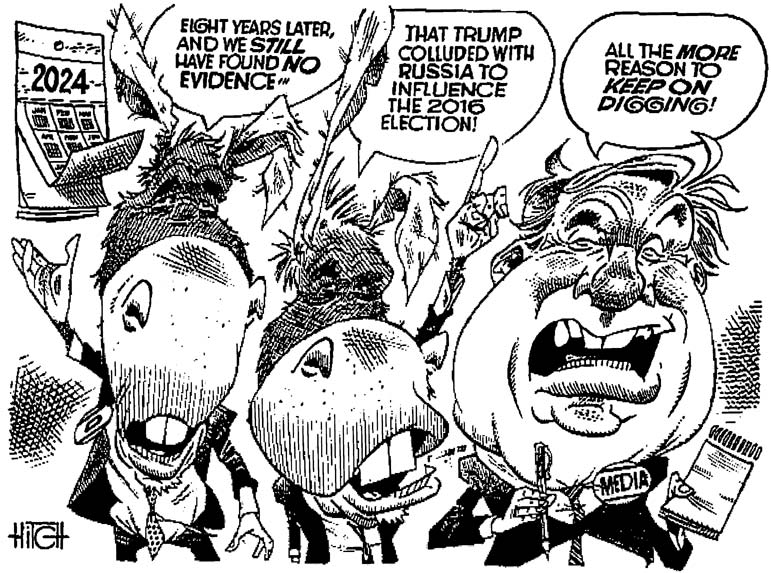 Where does America go to get its three years back?

Since before President Donald J. Trump was inaugurated, Americans heard that he is a deep-cover Russian asset, and his administration is a wholly owned subsidiary of the Kremlin.

Message to Schiff and other Democrat fetishists: "Yes, we have no collusion."

Documents that Schiff and the Justice Department recently released echo previous comments from Hate Trump, Inc. The president's enemies have zero proof that Team Trump conspired with the Kremlin — because they didn't.

1. Former Director of National Intelligence James Clapper: "I never saw any direct empirical evidence that the Trump campaign or someone in it was plotting/conspiring with the Russians to meddle with the election."

2. On collusion, former FBI chief James Comey said that in May 2017, "when I was fired as director, I still didn't know whether there was anything to it."

3. Obama Pentagon official Evelyn Farkas addressed "what we knew about the Trump staff's dealing with Russians." She confessed: "I didn't know anything."

4. Crowdstrike CEO Shawn Henry discussed Russia's alleged hacking of the Democrat National Committee's computers. "As it relates to the DNC, we have indicators that data was [sic] exfiltrated. We did not have concrete evidence."

6. Regarding proof of collusion, Obama's Attorney General Loretta Lynch said, "I can't say that it existed or not." She also did "not recall that being briefed up to me."

7. Special Counsel Robert Mueller concluded in March 2019 that his "investigation did not establish that members of the Trump Campaign conspired or coordinated with the Russian government in its election interference activities."


8. Obama's United Nations Ambassador Samantha Power: "I am not in possession and didn't read or absorb information that came from out of the intelligence community."

9. "I wouldn't have received any information on any criminal or counterintelligence investigations into what the Trump campaign was doing," said Obama's Deputy National Security Adviser Ben Rhodes. "I did not see, you know, the specific evidence of the actions of the Trump campaign."

12. "We have not been able to prove the accuracy of all the information" in Steele's dossier, said disgraced former FBI Deputy Director Andrew McCabe. A House staffer asked, "You don't know if it's true or not?" McCabe answered: "That's correct."

13. "We did not see any evidence that they got into actual vote tallying," former Acting Attorney General Sally Yates said about meddlesome Russians.

Will any of this convince Schiff and other Democrats that President Trump is not Vladimir Putin's employee? No. Leftists have become allergic to facts. And, like Wisconsin's late GOP Senator Joseph McCarthy, they see a colluder under every bed.