Jewry's largest denomination -- and its most liberal -- is embracing Al Sharpton. Can doing so be justified? 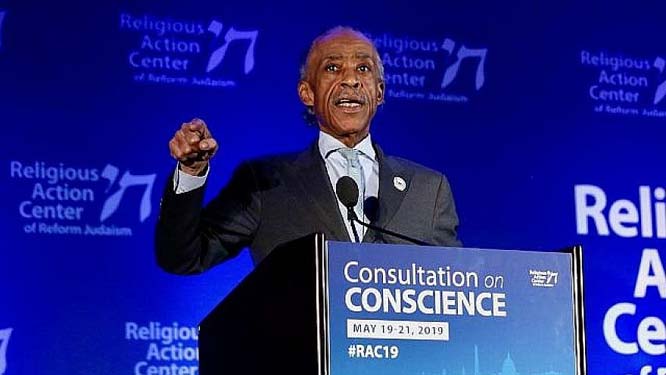 If the Rev. Al Sharpton were truly willing to repent for his past as a race-baiter and inciter of anti-Semitic violence, then having him speak at a Jewish event titled a "Consultation on Conscience" might be a good idea.

Perhaps that's what the Religious Action Center of Reform Judaism and its leader, Rabbi Jonah Pesner, thought they were doing when they invited Sharpton to their event. And after Sharpton made some oblique remarks about regrets he had about his "excesses" after being rebuked by the late Coretta Scott King, perhaps Pesner thinks his mission was accomplished, and that he had staged a historic moment of black-Jewish unity to rival those from the civil-rights era.

But in order for that to be true, it would have taken more than Sharpton's vague apology, which didn't come close to accountability for his role in fomenting anti-Jewish riots and violence. A reconciliation based in concerns about "conscience" that the RAC wraps itself in might have also motivated the group and their guest to take a stand against anti-Semites on the left, who are their political allies.

That's not what happened. What did occur was the Reform movement arrogating to itself the right to grant absolution to a man involved in anti-Jewish violence without the sort of statement that any denomination of Judaism would define as genuine teshuvah, or "repentance." While the participants spoke of common religious values and opposition to hate, what went on at the RAC conclave was nothing more than a political event cloaked in religion. Its sole target was U.S. President Donald Trump, whose defeat both Sharpton and liberal Jews regard as an imperative.

The RAC's supporters see its liberal stands on every conceivable issue as rooted in religion and a desire for social justice. However, the blatant partisanship of their agenda is an illustration of how the group often confuses faith with politics.

In 2019, that means all hands on deck to not merely oppose Trump, but to hang the responsibility for acts of anti-Semitic violence, as well as all other forms of hate, directly on him. Of course, they are entitled to their point of view, even if proof of Trump's anti-Semitism is lacking (the fact that he is the most pro-Israel president to date ought to at least mitigate the animus of his Jewish political foes). But to use the need to make common cause against Trump as an excuse to put the Reform movement's seal of approval on a figure like Sharpton remains inexcusable.

That the movement should take upon itself the right to grant Sharpton absolution for the past is chutzpah indeed. Reform Jews weren't chased and beaten in the streets of the Crown Heights neighborhood of Brooklyn, N.Y., in the summer of 1991, after Sharpton helped whip up hate by seeking to turn a traffic accident into an excuse for what many termed a pogrom.

As Norman Rosenbaum — the brother of 29-year-old Yankel Rosenbaum, a visiting student from Australia who was killed for the crime of being a Jew — wrote in the Washington Examiner, Sharpton hasn't atoned for his role in that crime. Nor has he urged residents of the area to turn in those involved in Yankel's murder, who were never caught by the police. As Rosenbaum put it: "How pathetic it is that the Religious Action Center's conference is titled â€˜Consultation on Conscience.' That organization, in having Al Sharpton speak, only demonstrates that it has none."

The Chabad-Lubavitch movement's Rabbi Mordechai Lightstone, whose members were the targets of the violence that raged for three days in Crown Heights, shared Rosenbaum's anguish. Referring to the RAC conference on Twitter, he wrote, "The willingness to wash away our pain is so cruel." He thought the RAC should "deplatform hate â€¦ Not give it a pulpit and whitewash it."

He's right about that. But to be fair to the RAC, they are hardly the first to give Sharpton an undeserved legitimacy. Sharpton ran for president in 2004 and ever since, Democratic politicians have regularly trekked to New York to court him, including a conference last month where almost all of the party's current presidential candidates bent the knee to the reverend.

Cable and broadcast-news networks (Sharpton had a show on MSNBC) have also been treating him like a respected African-American leader, rather than racial huckster who staged the Tawana Brawley rape hoax and once incited a mob to boycott a Jewish-owned business that was subsequently the site of a deadly firebombing.

Had Sharpton owned up to his past in an honest manner, the situation now might be different. But his amorphous confession to rabble-rousing, in which the words "Crown Heights" or "Yankel Rosenbaum" never passed his lips, was more about self-praise and a chance to be cheered for his freshly minted interest in black-Jewish unity than actual repentance.


The fact that he condemned anti-Semitism and noted that one couldn't fight racism without also standing against Jew-hatred may have sufficed for his audience of Reform rabbis, cantors and activists. But there were two things missing from that condemnation, which centered on the neo-Nazi rally in Charlottesville, Va., and the Pittsburgh and Poway Shabbat-morning synagogue shootings.

Sharpton made no mention of the rise of anti-Semitic hate from some on the left, including Reps. Ilhan Omar (D-Minn.) and Rashida Tlaib (D-Mich.), in addition to the venomous BDS movement.

Nor did he have a word to say about the dramatic rise in anti-Semitic hate crimes in New York City, in which African-Americans have targeted Orthodox Jews. But, of course, neither of those examples can be blamed on Trump.

Like the RAC, individuals who only oppose anti-Semitism when the guilty parties are their political opponents rather than their allies are not being honest. Nor are they doing anything useful in the battle against hate. The RAC's failure in this instance is disappointing, but that it thought to grant forgiveness to Sharpton just to gain an ally against Trump is a heartless act of moral turpitude for which it ought to repent.