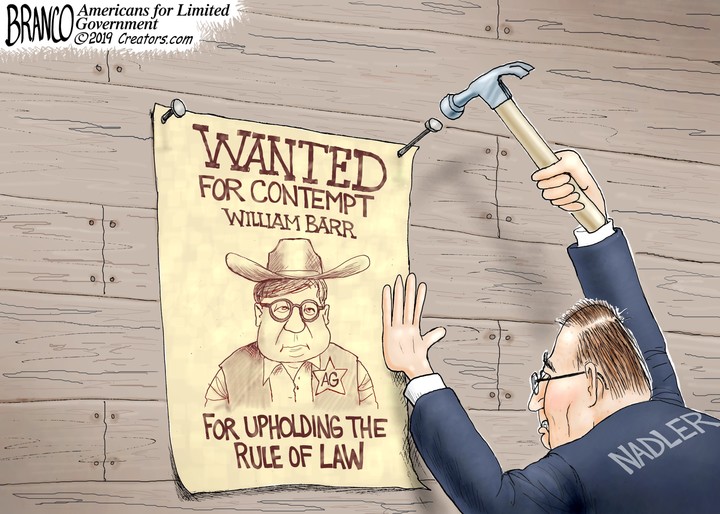 Democrats have lashed Attorney General William Pelham Barr to the horns of a dilemma: He must choose either to violate or obey federal law, and then await the consequences.

The committee then voted 24-16 Wednesday, along party lines, to hold Barr in contempt of Congress.

Alas for Barr, he is bound by the Federal Rules of Criminal Procedure. Rule 6(e)(2)(b)(vi) states, "Unless these rules provide otherwise, the following persons must not disclose a matter occurring before the grand juryâ€¦an attorney for the government." Even more ominous, under Rule 6(e)(7), "A knowing violation of Rule 6...may be punished as a contempt of court."

Contempt of Congress or contempt of court? Barr is like a restaurant patron staring at a menu with just two choices: arsenic salad or cream of cyanide.

Democrats cannot claim that Barr is hiding the Mueller Report. In fact, Assistant Attorney General for Legislative Affairs Stephen E. Boyd wrote Nadler, "the Attorney General offered you and other congressional leaders the chance to review the report with redactions only for grand-jury information (because disclosure of that information is prohibited by law).

That would permit you to review 98.5 percent of the report, including 99.9 percent of Volume II, which discusses the investigation of the President's actions."

(Now that the Democrats' Collusion vehicle rusts atop cinderblocks, like a Soviet-era Lada, they have sped off in their jazzy new Obstruction sedan.)

Regardless, DOJ stated: "To date, not a single Democrat, including Chairman Nadler, has reviewed the minimally-redacted report," available at Justice headquarters. White House press secretary Sarah Huckabee Sanders reiterated Wednesday, "Not a single Democrat has even taken the time to go and look at it."

Democrats are steering America into a constitutional crisis over something, nearly all of which, they already have at their fingertips — but refuse to touch. Nadler is like an infant screaming his lungs out for an overflowing bottle of baby formula, even as the 98.5-percent-full bottle right beside him cools from neglect.

Ear-splitting Democrat tantrums are the thanks that Barr gets for his transparency, which exceeds his obligations by light years. "Under federal regulations, the Special Counsel's Report to the Attorney General is a â€˜confidential report,'" DOJ explains, "the Attorney General is under no legal requirement to disclose the report."


Barr needed merely to inform Congress that Mueller found neither collusion nor obstruction. Barr could have scribbled this in 10 words, mailed his note, and then spent the day playing bagpipes (something Barr once did competitively). He then could have sliced the Mueller Report into kindling for his summer Barrbecues.

Instead, Mueller released a report summary, answered journalists' questions at a press conference, and published the lightly redacted report for Congress and the public to inspect. Barr offered the Senate Intelligence Committee relevant testimony and volunteered to appear before House Judiciary — until Democrats upended 206 years of precedent, changed the rules, and arranged for Barr to be quizzed by unelected, unaccountable staffers rather than elected, co-equal House members.

Barr also said he would not bar Mueller's congressional testimony.

The attorney general faces trouble because his attempt to be 98.5 percent open about the Mueller report — without breaking Rule 6(e)(2)(b)(vi) — will not satisfy Democrat sore losers who still want to demolish President Trump — federal law be damned.

Ironically, Bill Barr would be better off had he simply stiffed these lawless lawmakers and let them fetishize a one-sentence letter.