Kicking George Washington out of church 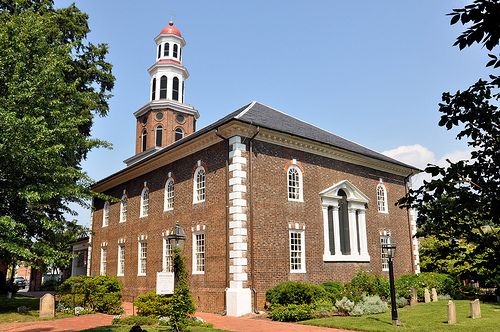 My wife and I were docents of Christ Church in Alexandria, Va., when I worked in nearby Washington, D.C., a city named for a former parishioner. Yes, George Washington went to church there. As I used to explain to tourists, he had even helped get the place built and had his own pew box, but docents will maybe be quiet about that now. And, who knows, the capital may one day change its name.

Washington, you see, had slaves, and, in the form of a 150-year-old, marble plaque hanging in the sanctuary, he is being expelled from the church. As a politically zealous rector along with others explained in a statement, this plaque, along with another one memorializing Robert E. Lee, have kept some visitors and guests from ever coming back. They felt unsafe and unwelcome, it was said, and so, pretty soon now, goodbye, George.

OK, the part about Lee may be defensible, although he went to the church much of his life and was finally confirmed there after his prayerful wife's loving preachments brought him to a new religious life. Honoring a Confederate general can nevertheless seem outrageous to some. I get that. But Washington?

As a docent, I encountered visitors of all kinds, not a one of them offended by the Washington plaque. To the contrary, they were fascinated by his connection to Christ Church. Here, after all, was a wondrously honorable man whose brave leadership helped win the Revolutionary War. He stopped a possible military coup with gentlemanly eloquence. He helped give us a Constitution forming one of the most extraordinary countries in history. His outstanding example as president of the United States was a major factor in the new government actually working

As for slaves, he was known to have been constantly kind to them, and, over his life, developed an increasingly abolitionist point of view. He finally arranged for all the slaves at Mount Vernon to be freed after his wife died. Slaves were also part of the Virginia culture in his times, and we are all to some extent creatures of our culture. Christians happen to believe that we are also all of us sinners and that there are such things as repentance and forgiveness.

According to a Wall Street Journal article, most of the people who are not coming back to the church are congregants fed up with all the politics and ever less mention of Christ, as one put it. Some new arrivals do appreciate the activist spirit and, the article says, any number of otherwise declining mainstream churches around the country are attracting new members as they become more political. Even when I was at Christ Church 14 years ago and more, politics was scarcely unknown, as I learned by way of some sermons implying capitalism was hell.

But it was also a wonderful place, a home of grace blessed with an amazing choir, a strong sense of love, opportunities for intense association and some of the best friends I have ever had. It was an experience that lifted me in so many ways.

Churches should clearly stand against such evils as racism, but politics can be technical along with posing moral questions â€“ one should want to help the poor, but a wrongly conceived welfare program can do more harm than good, for instance. Politics can also be divisive when other means of addressing each other are not.

That brings me to something terribly moving the other day. University of Alabama football players were at the White House to celebrate their winning of the national championship. Then some gathered around President Donald Trump to pray, not as a matter of politics one way or the other, but as a way of asking God to give him peace. There was something joyous here, a lot more joyous than removing a plaque of George Washington from a church.