The Unchanging of the Guard 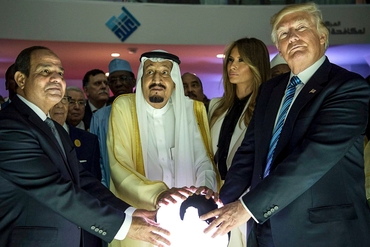 For me, the most interesting parts of a Trump speech are his diversions from the script. Sometimes, if the speechwriter's got a line that tickles his fancy, he'll just riff off it for a bit. Sometimes he diverges from the prepared remarks in striking ways. This weekend in Saudi Arabia, addressing the big Islamo-schmoozefest, he did both. The President was supposed to say:

That means honestly confronting the crisis of Islamist extremism and the Islamist terror groups it inspires.

That means honestly confronting the crisis of Islamic extremism and the Islamists and the Islamic terror - of all kinds. We must stop what they're doing to inspire because they do nothing to inspire but kill and we are having a very profound effect if you look at what's happened recently.

The last part is just one of those aforementioned riffs. But the substitution of "Islamic" for "Islamist" is more intriguing. The first deployment might just have been accidental. It was a long way into the speech and sometimes the eye and mouth start to wander. On the other hand, in this particular address, Trump had been unusually disciplined about staying on-script. And then he started to speak the second reference - "the Islamists" - and he seemed to catch himself and back up, to insist on reiterating: "the Islamic terror". Not Islamist, but Islamic.

Longtime readers will recall that ten, fifteen years ago I used to use the word "Islamist". And then I stopped doing so. It had once seemed to me a useful distinction between hardcore nutters and the millions of Muslims around the world who just want to run corner shops and drive taxis and get on with their lives - and such a distinction might lead some of those shopkeepers and cab drivers to resist the encroaches of "Islamism".

But in our less civilizationally confident time any such line is even less bright. "Islamist" came to seem an equivocation, and one that led to darker evasions - such as that "a small minority" has "hijacked" a "religion of peace". And the evasions were followed by a ludicrous but insistent inversion of reality - that, as John Kerry, Hillary Clinton and others will have it, Islam has "nothing" to do with terrorism.

So I mothballed "Islamist". Ever since, around the world, I have had many scholarly discussions into the small hours about the usefulness of the word, and the precise differences between "Islamists" and Muslims, in the course of which someone always makes the artful debater's point: "What about Mohammed? Was he an Islamist?"

I think we all know the answer to that. President ErdoÄźan certainly does. Having previously declared that the concept "moderate Islam" is ugly and offensive because "Islam is Islam", he recently rebuked Angela Merkel, mutasarrÄ±f of his German sanjak, for using the term "Islamist terrorism". "Such an expression is not correct because Islam and terror cannot be associated. The meaning of Islam is peace." Or else.

So Trump's rejection of "Islamist" seemed conscious and deliberate - especially in a speech written by some no-name Foggy Bottom types that veered dangerously close to Kerryesque or Theresa May levels of blather. Key line:

Terrorists do not worship God, they worship death.

ErdoÄźan could put straight whichever State Department flunky cut'n'pasted that illusory boilerplate. For one thing, these things are not incompatible, not an either/or choice. Terrorists worship death and God - because this particular God promises that paradise is a brothel for which this earthly life is a mere waiting room.


Left to his own devices, Trump would never utter such a line. On the campaign trail, Trump proposed banning Muslim immigration until we can "figure out what the hell's going on" - which, whatever else may be said about it, indicates a certain prudent modesty rather than the blithe assumption, to which 99 per cent of other western leaders subscribe, that you know your enemy's motivations better than they do. Likewise, "Islamist" is a speechwriter's word, "Islamic" is Trump's - and, like his uncovered wife and daughter behind him, not a small thing to throw in the face of a conclave of Islamic bigshots.

That was the service the President provided during the campaign: as I said to Greta van Susteren one night, in the objective sense Trump's call for a "Muslim ban" is less nuts than John Kerry insisting, even as they're still swabbing the blood from the streets of Paris, that Islam and terrorism have nothing whatsoever to do with each other. In a world of Kerry, Merkel, May, Cameron, Hollande, Macron, Trudeau, Turnbull et al, you need an outlier like Trump just to move the meter of public discourse a sixteenth of an inch out of dissembling and delusion toward something approximating reality.

The trouble is Trump is left to his own devices less and less. The Republican base voted for Trumpism: an end to illegal immigration, an end to one-sided trade deals, an end to the spiraling cost of and dwindling access to health care, an end to decade-and-a-half unwon wars, an end to the hyper-regulation of every aspect of American life, an end to freeloader "alliances" like Nato, an end to the toxic bargain of "globalism" wherein all the jobs in your town migrate to the Third World and all the Third World migrates to your town. Trumpism is what appealed to these people, and, if that's your bag, Trump was the only guy running on it. As I wrote three weeks after he entered the race, the other 16 candidates were all free to take up these signature issues. Indeed, prominent GOP operatives were urging them to do so. Me in July 2015:

If, as Karl Rove proposes, other candidates are able to talk about the subject in a more "inclusive" way, so be it. But, if "inclusive" is code for not addressing it at all, nuts to that.

Who's to say how things might have gone had Jeb or Marco or some other approved, house-trained candidate snaffled Trump's issues? But none did. Republicans voted for Trump because he was the only advocate of Trumpism.

Unfortunately, most of the Republican leadership in Congress is opposed to Trumpism, preferring some shriveled thing called "the Ryan agenda" that nobody other than a few thousand of his constituents in a corner of Wisconsin can be plausibly said to have voted for. Worse, significant figures in his Cabinet, and even more in the second and third tiers of his Administration, also reject Trumpism - including, one notes, members of his own family. If rumors are correct, the new Director of the FBI will be an open-borders zealot who voted for Hillary. If rumors aren't correct, you can bet that in any meeting of five or more persons with the President at least one will be bounding out of the Oval Office to leak details of some infelicitous Trump aside to The Washington Post and The New York Times. That's to say, the betrayals start in the room.

The Loyal Opposition isn't really the issue here: They'll always hate Trump. A decade ago, I wrote of George W Bush that it takes some skill to get demonized as the new Hitler when 90 per cent of the time you're Tony Blair with a ranch. But the Dems hated the ranch - just as today they hate Mar-A-Lago and Trump Tower, and the hair and the showgirls and the Slovene supermodel. And "bigly" is the new "nucular". So they're having a grand old time being led by the California Democrat chairman in mass chantalongs of "F**k Donald Trump!"

But, beyond Trump, what of Trumpism? The guys who are seriously f**king him are the GOP. The really damaging opposition is from Trump's own party: the Disloyal Government. They seem determined to teach Republican voters that you can vote for change all you want ...but you won't get any. In the Eighties, the amusing Tory wet Norman St John Stevas liked to call Mrs Thatcher "Tina" because she was fond of telling her Cabinet colleagues "There Is No Alternative" - to her policies. Ryan et al are likewise telling us "there is no alternative" - to the bipartisan consensus on mass unskilled immigration, ineffectual interventionism, one-way globalism, bureaucratized unaffordable health care, and all the rest. As I observed to Stuart Varney on Fox Business, that's a very dangerous lesson to teach the voters - that, to modify Obama, elections don't have consequences. No matter who's in the Oval Office, they're not changing the guard.

So, if you prefer an unscripted Trump over an unTrumpish script, it was modestly heartening to hear the President modify the State Department's weasely equivocations - just for a moment, just for a single word, evoking the Trump of 18 months ago. If it takes going off-script to get back on-message, let's have more of it.