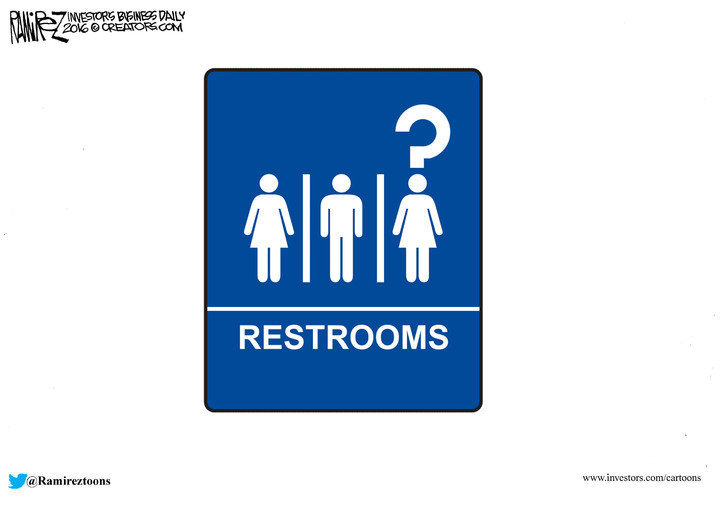 For the past eight years, common sense has disappeared from the political spectrum with nonsensical executive orders and the machinations of the closet fascists in office. The federal government interfering in states’ rights has become routine but there are signs that state resistance to the bullying will hopefully be a harbinger of welcome change. The great state of North Carolina is flexing the might of principle against a hostile Department of Justice. It has filed a lawsuit against the DOJ for threatening to withdraw funding to the state over its common sense law concerning privacy in restrooms.

The mere fact that North Carolina had to pass a law declaring that persons must only use the public bathrooms for the gender they were born with is a testament to the tyranny of a very powerful minority aka the LGBT political bloc. What has transpired since the bloc’s outrage over the NC law, however, is the sad testament to how far up the scatological outlets the celebrity lapdogs are. I say sadly, because I find I have to add some favorites to the lists of celebrities I wish would just shut up and sing.

The mega star Beyonce is just one of the stars who has denounced the NC privacy law and advocates the boycott of the state. Bruce Springsteen, Jimmy Buffet, Cyndi Lauper, Michael Moore and Sharon Stone are among those who have stated that they find the NC law ‘hateful’ and discriminatory. Sadly Ringo Starr, one of my favorites, cancelled an appearance there saying, “I’m sorry to disappoint my fans in the area, but we need to take a stand against this hatred. Spread peace and love.” Oh, Ringo, this is the wrong drum to beat.

Douglas Williams at The Federalist makes it clear: HB2simply and justly states that persons must use the bathroom and locker room that identifies with the gender on their birth certificates. It also states that municipalities requiring different sexes to share public accommodations is inconsistent with North Carolina’s law and constitution. This increases legal protection for schools, civic organizations, and especially small business owners.

But why did the state feel it was necessary to pass this law now and the answer sheds a bit of light on what happens when northern liberals migrate to red states. The city of Charlotte went against state privacy law when it enacted an ordinance requiring all government and business bathrooms and showers to be open to all sexes. Again Mr. Williams elaborates: The Charlotte city council had no authority to enact its ordinance, much less threaten tens of thousands of businesses with fines and minor punishments if they didn’t comply. They were threatening 23,000 businesses and nonprofits, including small “mom and pop” establishments, with fines and other minor punishments if they didn’t conform to that policy. Such threats are tyrannical when it was known that the ordinance they were discussing was beyond their purview.

The city of Charlotte is purported to be the bluest in the state thanks to an influx of northern liberals into the southern red state. Many of my conservative friends here in New York City who moved to NC to escape the onerous taxes of this liberal nest have complained to me that their adopted city is being invaded by the damn Yankees and their leftwing politics. Although I couldn’t find out the exact makeup of the Charlotte City Council who passed the ordinance, I suspect it’s as overloaded with Democrats as the NYC Council which has only three Republicans.

As usual, the PC brigade has distorted and used propaganda to make what is a non-issue a case of hatred and discrimination against trans-genders that simply doesn’t exist. Does the new legislation advocate discrimination against anyone in their pursuit of jobs, housing, medical care? No. What it does do is protect the right of women to privacy in public restrooms and showers. We bring our young children into these areas to keep them safe. What the government is insisting is quite the opposite.

NC Governor Pat McCrory responded to the bullying DOJ and the WH with the state’s own legal tactics that will take the issue to the courts. Now the Justice Department has filed its own lawsuit Monday over the state’s controversial “bathroom” law, with the Obama administration answering the NC lawsuit.

When will the madness end? On Monday, the Chicago school system announced that that students and staff must be granted unfettered access to intimate school facilities based on their chosen gender identity. So whatever floats your boat or your urinary urges, feel free to go wherever you choose no matter who really belongs in that stall. Boy, am I glad I sent all my children to all boys and all girls schools.

Shouldn’t this expose the real agenda of the LGBT and this administration? This fuss over bathrooms is really a backhanded slap at those who hold the traditional view of gender identity. The same sex battle was never about the rights of marriage for longtime lovers. It’s always been about sexual reengineering starting with our children. When I think about civil rights, I think about jobs, homes and the right to vote. None of these rights are being denied to what demographically is a very comfortable economic class.

Here’s hoping that the other states join North Carolina in its battle with this bullying administration for the right of states to govern and protect the interests of their communities.