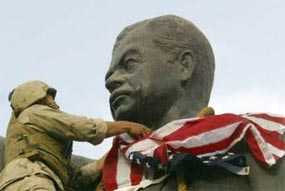 http://www.jewishworldreview.com | When Bill Clinton deployed American troops in places like Bosnia and Haiti, he was criticized for turning foreign policy into "social work" (as Michael Mandelbaum pungently put it). By what authority, many asked in the 1990s, did the president place troops in harm's way without discernable American interests at stake?

George W. Bush has made sure not to repeat this error. He deployed force twice - in Afghanistan and Iraq - and both times he made a convincing case for U.S. security requiring the elimination of the enemy regimes.

But some in Congress, many in the media, and even more on campuses, not to speak of the demonstrators on the streets, are judging the hostilities in those two countries less in terms of what they do for Americans than how they affect the other side.

Note the many voices from allied countries arguing that because Afghanistan continues to suffer from a range of maladies (warlordism, female repression, poverty, drug trafficking), U.S. efforts there failed.

Even Secretary of Defense Donald H. Rumsfeld, when asked about U.S. "failures in Afghanistan," did not dispute the premise but defensively noted that on being liberated, Afghans "were singing; they were flying kites; they were happy."

But this view forgets the substantial security benefits Americans derived from the elimination of Al-Qaeda's headquarters. The Taliban are no longer in business, sponsoring terrorism's headquarters.

Something similar is now occurring on the subject of Iraq: gains to Americans and Britons from getting rid of Saddam Hussein and his weapons of mass destruction seem to matter less than the outcome of plans to rehabilitate Iraq. The difficulties in fixing Iraq are being used to cast doubt on the whole military venture. The Afghan and Iraqi wars, in other words, are judged more by the welfare of the defeated than by the gains to the victors.

Almost unnoticed, war as social work has become the expectation.

To point out this strange turn of events is not to argue against Afghans and Iraqis benefiting from U.S. military action. They should; and in doing so they are joining a long list of former adversaries liberated by the United States:

Iraqi gains are very welcome, but they come as a happy byproduct of the coalition pursuing its own interests, not as the primary goal. It is proper to put coalition forces' lives at risk only to the extent that liberating and rehabilitating Iraq benefits the United States, the United Kingdom, and the other partners.

Each state's obligations, in other words, are ultimately to its own citizens.

This is in no way to argue against providing benefits to Afghanistan and Iraq; but it is to say that these are not a moral obligation. Nor should wars be launched for humanitarian reasons alone.

Should democratic leaders forget this iron law and decide to launch purely philanthropic efforts, the results will be unpleasant. Take the American case; when the population does not see the benefits to themselves of warfare, their soldiers flee the battlefield, as in Lebanon in 1983 and Somalia in 1992. There simply is no readiness to take casualties for the purposes of social work.

So, by all means, bring on "Iraqi Freedom." But always keep in mind, as President Bush has done, that the ultimate war goal is to enhance American security.