'Leftist AIPAC' is closer to power, but still marginalizes itself 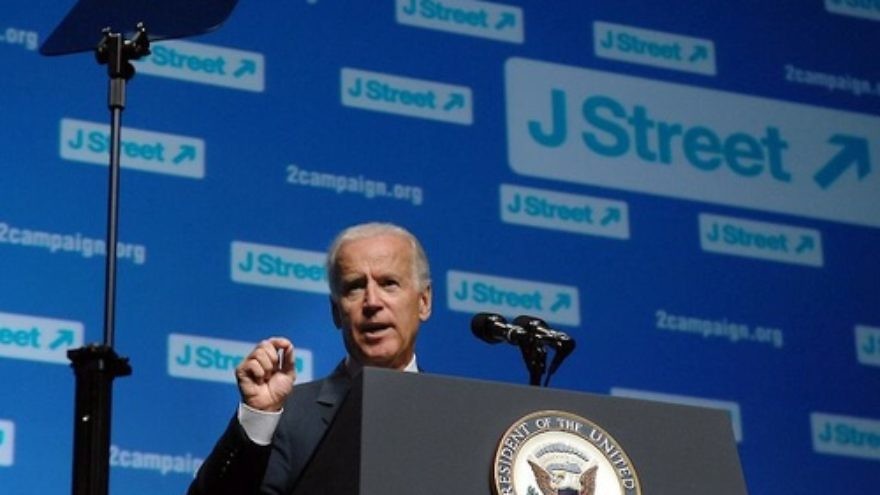 In case you were in doubt, J Street is busier than ever, and apparently thriving. The left-wing lobby group has a lot to be happy about with respect to the Biden's administration policies towards Iran and the Palestinians.

That means it is poised to get back to its happy place cheerleading for pressure on Israel to surrender territory to the Palestinians and for more appeasement of an Iranian regime that is still bent on the destruction of the Jewish state, just like during the good old days of the Obama administration.

At its annual conference this past week, it heard from Palestinian Authority leader Mahmoud Abbas, left-wing Israeli politicians and a cross-section of congressional Democrats who are critical of the Jewish state. The group can claim that its views are closely aligned with the new administration, which was represented by the appearance of U.S. Ambassador to the United Nations Linda Thomas-Greenfield on its roster of speakers.

While still a pale shadow of its rival — the mainstream AIPAC lobby — the event demonstrated that J Street can still count on having friends in high places in the Democratic Party.

But its pretense as a leading voice for American Jews is still a sham. For all of its connections, it is hopelessly out of touch with what is happening in Israel. Just as important, it is locked in a competition with more radical anti-Zionist groups that has driven into alliances with radical left-wing anti-Semites and is ensuring that it will remain a marginal force in Jewish life.

Founded in December 2007 as more or less a Jewish rump of the leftist group Moveon.org, J Street has touted itself as the voice of "pro-Israel, pro-peace Americans" and received massive funding (which it initially sought to conceal) from left-wing billionaire George Soros. Its aim was to represent the views of the vast majority of American Jews who are liberals and Democrats without having to operate as part of a bipartisan coalition with those whose views were more centrist or to the right. Its founders believed that liberal Jews were dissatisfied with AIPAC, the umbrella group that operates as the voice of pro-Israel groups in Washington. J Street would be the group for Jews who didn't want to defend Israel, and instead wanted to lend their support to those who were prepared to hammer it into making concessions to the Palestinians.

J Street found its footing not by boosting Israel in any sense but via partisan politics in both countries. Within a year of its founding, its purpose became plain: to operate as an American opposition group to the center-right government led by Israeli Prime Minister Benjamin Netanyahu while also taking on the role of Jewish auxiliary for the Obama administration.

Former President Barack Obama shared J Street's view that Israel had to be "saved from itself." While AIPAC saw its brief as representing Israel's views to America, J Street had only one objective: to back Obama's stands even if they were rejected by the overwhelming majority of Israelis or actually endangered the Jewish state.

The latter was certainly an apt characterization of his determination to affect a rapprochement with Iran, an Islamist regime that was not only the world's leading sponsor of international terrorism, but also actively seeking a nuclear weapon with which it could potentially make good its pledge to eradicate Israel.

Given that most American Jews were devoted admirers of Obama, and neutral or hostile to Netanyahu, that should have, at least in theory, enabled J Street to fulfill its ambition of replacing AIPAC as the focus of American Jewish engagement with Israel. However, that's not how things worked out. Despite the fact that many liberals, as well as conservatives, are frustrated by AIPAC because of its determination be bipartisan, it remains the major force in pro-Israel activism in Washington.

Pro-Israel Democrats may not have loved Netanyahu or identified with his policies, but most wanted no part of a group whose mission was to beat the Jewish state into submission, regardless of the opinions of its people about Obama's policies.

That's not to say that J Street's support for Obama's Iran nuclear deal was not shared by many American Jews. Indeed, while a 2015 Pew Research Institute poll showed that only 21 percent of Americans approved of the pact, another poll showed that 48 percent of Jews backed it.

Still, that didn't translate into J Street overtaking AIPAC. Though J Street's approach to Israel was likely to win favor from Jews who were religiously unaffiliated and not active supporters of Israel, among those who are actively engaged with Israel, its views are very much in the minority.

Just as importantly, its belief that liberal Zionism — at least, as they defined it — represented the cutting edge of left-wing Jewish activism may have been a miscalculation.

The fact that many American Jews are increasingly alienated from Israel isn't so much a matter of left-wing politics as it is demography and an increasingly assimilated population has little sense of Jewish peoplehood. J Street's approach isn't necessarily attractive to Jews who view even the most left-wing version of Jewish nationalism as alien to their universalist sensibilities.

So it comes as little surprise that openly anti-Zionist groups like Jewish Voices for Peace and IfNotNow have been stealing J Street's thunder on the left in recent years. These groups oppose Israel's existence and cross over into actions that are anti-Semitic, such as JVP's "deadly exchange" blood libel that attempts to blame Israel and American Jews for the deaths of African-Americans at the hands of law enforcement. On college campuses across the country, J Street chapters make common cause with these groups.

Indeed, the intellectual journey of writer Peter Beinart, one of the J Street conference's featured speakers this year, illustrates this problem.

Beinart used to claim to be a voice for liberal Zionism like J Street. But his anger at Israelis for ignoring his foolish advice led him last year to renounce support for the Jewish state and embrace anti-Zionism. Yet just like Abbas — an anti-democratic dictator, funder of terrorism, Holocaust denier and guilty of anti-Semitic incitement, as well as someone who has repeatedly rejected a two-state solution — Beinart was welcome at the J Street conference.

The conference also featured the group's support for legislation seeking to restrict aid to Israel to prevent it from "violating the human rights of Palestinian children." The premise of the bill about Israel abusing Palestinian kids is a libel. And it is sponsored by the usual suspects of anti-Israel agitation, including Reps. Betsy McCollum (D-Minn.), Alexandria Ocasio-Cortez (D-N.Y.), coupled with Ilhan Omar (D-Minn.) and Rashida Tlaib (D-Mich.), who are not only open supporters of the anti-Semitic BDS movement but also have trafficked in anti-Semitic tropes.

J Street's support for this legislation, as well as its opposition to enforcement of the Taylor Force Act, which would deny funding to the P.A. so long as it pays salaries and pensions to terrorists, gives the lie to their "pro-Israel" claims and must be understood as part of the group's maneuvers to compete with anti-Zionist groups for support.


Though its supporters may be encouraged by the Biden administration's gestures towards the Palestinians and willingness to re-engage with Iran, both President Joe Biden and Secretary of State Antony Blinken have signaled that they have little appetite for reviving peace negotiations between Israel and the Palestinians. As was the case under Obama, J Street will cheer the president, though it's unlikely to have much influence on an administration that may not wish to be sabotaged by Palestinian intransigence the way Obama's was.

While J Street will remain popular with media outlets that are hostile to Israel, it's still irrelevant to Israeli reality and won't make many inroads among those liberal Jews — let alone centrists — who still care about the Jewish state.

It will also continue to lose ground to more radical groups that can offer their hostility to Zionism straight up, undiluted by any disingenuous rhetoric about also being "pro-Israel."