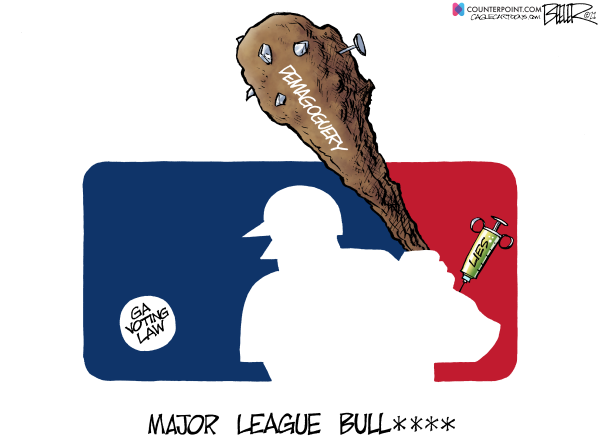 President Joe Biden, the great bipartisan unifier, has figured it out again, namely that certain Republican politicians in Georgia are reinstituting the Jim Crow submersion of Black rights and that you can find it in a voting law they recently constructed. Major League Baseball was so upset that it decided to pull its All-Star Game out of Atlanta, robbing the state of millions in commerce.

But wait. Maybe these baseball hotshots should take a look at a voting bill congressional Democrats are promoting and then move out of America. First, though, they should take a closer at the Georgia law. It does not live up to its infamy.

Yes, it's hanging on to important photo IDs when people vote in person, but says, hey, you can get a free state ID if you want. Despite talk to the contrary, there are all kinds of early Saturday, Sunday and weekday opportunities for in-person voting and, on election day, polls are open from 7 a.m. to 7 p.m.

A Georgian can get an absentee ballot without being somehow incapacitated, but, reasonably enough, this citizen has to ask for it and send one of a bunch of different, easily obtained ID possibilities when he or she mails it in. It has to be filled out within a matter of weeks of its availability time and sent in early to avoid arriving late.

Drop boxes were used as a means of special convenience during the 2020 COVID-19 election, and will be retained, but in fewer numbers, to the puzzling outrage of some.

None of these identified atrocities or other complaints is going to get in the way of any minority group that I know of, but molehills grow into mountains when you look at the Democratic legislation that will really, truly free one and all to vote, not once an election, but maybe two or three times. I exaggerate, but the bill, which does have some good in it, plays loose with rules, as in calling for absentee ballots to be mailed to one and all without request and then allowing harvesting.

There can be lots of mistakes in this first error, and think about harvesting for a moment. It's this business of someone delivering a lot of ballots with the possibility of learning how you voted or throwing your ballot away or varied other means of cheating.

Some states have done away with harvesting, but now we have the King Kong federal government thumping its chest, figuring it knows best even as there are progressives warning that states won't be able to handle all the new duties being shoved their way, and you hope not.

The legislation does not do away with photo IDs, for instance, but it makes them meaningless by saying all a voter has to do is sign a statement swearing he meets all the stated criteria for voting and knows that perjury awaits him if he lies. What if signatories are not who they say they are? How do you find out beforehand, and, even if you have taken pictures and thumbprints and go searching for these people, how do you keep the illicit votes from being counted?

If it becomes law, the legislation will also give government money to support federal candidates who get lots of small donations, even if the candidates are members of QAnon, I guess. It will set the stage for making Washington, D.C., a state, thereby serving up two Democratic senators and giving the Constitution an interesting twist. It will also allow registration of 16-year-olds to vote when they are 18, preparatory to House Speaker Nancy Pelosi's dream them becoming voters and adolescent power enhancing Democratic power.

If Major League Baseball leaves America, where will it go? To China maybe, where it already has money-making ties? Of course, China is stealing our intellectual property, putting Uyghur Muslims in concentration camps, threatening Taiwan and destroying Hong Kong liberties. But what's that compared to Georgia reducing the number of drop boxes?