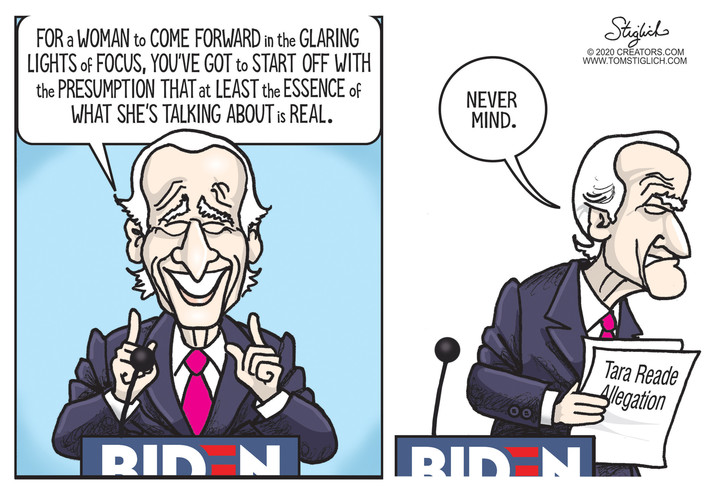 According to Business Insider, four people have stated that Reade told them contemporaneously about her accusation that Biden forcibly penetrated her with his fingers in 1993.

Meanwhile, the Media Research Center uncovered a clip, purportedly of Reade's mother, calling into "Larry King Live" back in 1993 to obliquely refer to the allegation. While such evidence does not speak to the actual event at issue, it does demonstrate that Reade has been talking about the alleged incident since it occurred.

The media ignored the original allegation for weeks. Now, even while reporting on the new developments, they've found ways to downplay their importance. Thus, The Washington Post — democracy dies in darkness! — wrote an article headlined "Trump allies highlight new claims regarding allegations against Biden."


Normally, headlines are designed to convey information about the underlying story. This headline was apparently written in English, translated to Swahili and then to Punjabi via Google Translate and then back to English before printing.

Other news outlets skipped the revelations altogether. The New York Times, which ran a comprehensive piece two weeks ago attempting to debunk Reade's case, completely ignored the new information. NBC News didn't bother covering the information either. Meanwhile, NBC News and MSNBC Chairman Andy Lack printed a piece on the network website celebrating its journalistic performance. "Humbled by the responsibility we bear, we try our damnedest to serve our audience," he said. It's a wonder Lack didn't dislocate both arms trying desperately to pat himself on the back.

As of this writing, Biden has not been asked a single direct question about Reade by a television reporter. Meanwhile, members of the media cheer their audacity in asking President Donald Trump questions like, "If an American president loses more Americans over the course of six weeks than died in the entirety of the Vietnam War, does he deserve to be reelected?" So. Much. Journalisming.

Why does any of this matter? Not because Biden should be convicted in the court of public opinion without evidence. He shouldn't. The standards of due process should apply evenly, regardless of partisanship.

Supreme Court Justice Brett Kavanaugh should not have been subjected to thousands of hit pieces, magazine covers and twisted accusations that his anger at rape accusations he disputed was mere evidence of his privilege. Christine Blasey Ford should not have been celebrated nationwide as a symbol of truth telling without any corroborative evidence. #BelieveAllWomen was always an idiotic slogan. Only now are members of the media admitting it.

That's why this matters. Biden's candidacy will survive Tara Reade: Democrats aren't dumping Biden overboard based on a 27-year-old accusation of questionable veracity, and they certainly won't do so when running against Trump, who has his own checkered history. But the media's pathetically hypocritical standard on due process and sexual assault allegations won't survive. Neither will their credibility.

President Trump spends an inordinate amount of time bashing the media for their lack of seriousness. The same media who laureled Democrats for cashiering Kavanaugh and now spend their days studiously avoiding any talk about Tara Reade deserve every ounce of skepticism the American people can muster.

There's a serio-comic tenor to this whole situation. We're living in a time when we must trust the media more than ever — to bring us unbiased, factual information about a global pandemic, to warn us of dangers and to be reasonable about risk assessment. Yet the media have spent so many years burning through their credibility that they have little left. That's their own fault.

If they wish to restore their credibility, they could start by apologizing for their Kavanaugh coverage — and by providing some fact-checking about their own political motivations.