Health agency should stick to health 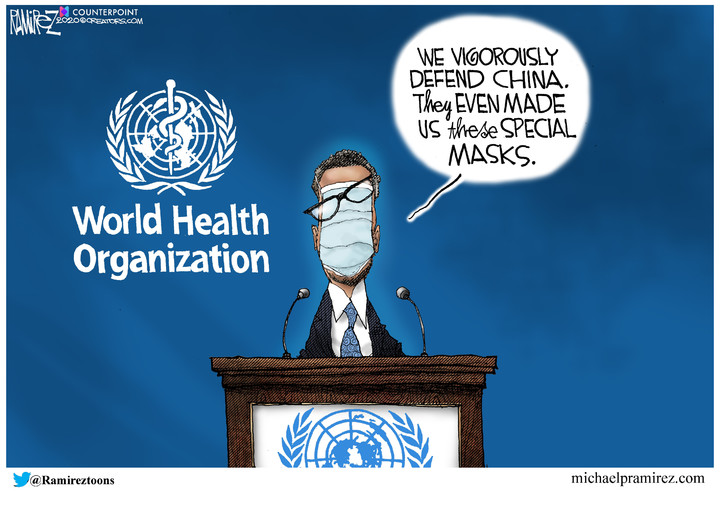 The World Health Organization is a Chinese toady. When the coronavirus broke out in China, and after the nation had some time to assess the facts, it did not share them and lied to the U.N. agency. The truth would not serve China's purposes, and even after the agency itself had been treated to facts by other sources, it spread the lies globally. People died as a consequence.

This is not some minor deal, and the fact is that the 72-year-old WHO does kowtow to China. It's not that China gives it a lot of money. The total it provided in a 2018-2019 budget cycle was $76 million. The United States, at the head of the pack, was assessed $237 million and voluntarily chipped in $656 million, according to National Public Radio. No, it's a case of ideological handholding with the WHO director, Tedros Adhanom Ghebreyesus, and maybe he also fears repercussions if he crosses certain walls.

It does not follow that WHO and the United States are sitting around twiddling their socially distant thumbs. Years ago, WHO helped consign smallpox to history books, and today it's a fierce enemy of malaria along with other diseases. Right now, it is focused on the coronavirus fight.

In answer to criticism of its recent mix-ups, Tedros has denied fault and outlined achievements of the moment. A big-time critic, President Donald Trump, reviewed the agency's crumbling reliability and said we were going to suspend funding. He then said that the money would go to other health organizations that were trustworthy, such as the Red Cross.

At this particular moment, he ought to leave the money alone, demand reform and then say, if it is not forthcoming, neither will more money be forthcoming. We don't need more havoc on top of havoc, and WHO is at last doing some good. The New York Times and other dear media friends known for leftist bias say what Trump is really doing is trying to shift the blame he so ardently earned through his own initial virus laxity. Whatever, the big issue in all of this is that we have an international health organization that has been muffing an incredibly important job and helped deliver a pandemic.

At the end of December, China belatedly notified WHO about what it identified as a middling sickness. Taiwan, treated by WHO as an outcast not to be listened to, offered up researched data showing instead that here was an extremely dangerous virus that was transmitted by one human to another. An outstanding Chinese scientist had made a similar case and world experts were nodding their heads.

China said it was all hokum and WHO agreed. Go ahead with trade and travel to and from China, WHO said, and so there was trade and travel to be followed by infection and death all over the world. People noticed as much, and China finally conceded what was really happening. WHO said oh, OK, science has unwrapped new information that we will share for the sake of humanity, a rediscovery of purpose.

For China, more impact on the United Nations mattered enough for it to work like the dickens to get Margaret Chan, a national, elected director general of WHO, and then, when her time was up, backed Tedros, an Ethiopian microbiologist, as a replacement equally dedicated to their causes. Like Chan, who cozied up to totalitarian chaps, he did, too.

The Washington Examiner points out that his hand-picked goodwill ambassador, Robert Mugabe, was better known for his ill-will when he fled a coup that ejected him as Zimbabwe's dictator.

Trump had wanted to call COVID-19 the China Virus, but he was therefore called a racist even as the tolerant Chinese said the American military plotted the whole thing. Here's a country that steals our intellectual property, cheats on trade and has missed few opportunities as the bad guy wanting supreme world power. We need to stay wary and get WHO on the path to putting world heath over Chinese allegiance.