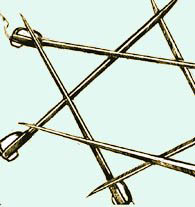 Arguing: It's a
Jewish thing

http://www.jewishworldreview.com | My kids came to me for advice on handling an essay for a contest. Between you and me, I thought the topic was ridiculous. They were expected to figure out what holds the Jewish people together.

It's pretty obvious that NOTHING holds the Jewish people together! I mean, just look at the news. Look at the 354 parties in Israel (just exaggerating a little). In America, we're no better. Fighting, fighting. Between denominations; within denominations. Why within any given synagogue, it's arguments and more arguments: Should the shul do outreach? Should we spend SO much on a new building? And where exactly should the women's section be anyway in this new building?

In fact, if anything were to define us, it's that we argue. Tell me you disagree with that.

It's almost as if we could be defined by our arguments. I mean, what other culture cracks the joke about the shipwrecked guy who builds two synagogues-one of which is the one he's not going to?

Hey, wait a minute. Am I on to something? Is this what holds the Jewish people together? The truth is, we are somehow or the other, together. We've been slaughtered together. And when the chips are down, we're on the same side. Could it be that what looks like divisiveness, isn't? Think of our history. Picture our Talmudic scholars pouring over old books with their chavrusas (learning partners). What are they doing?-Arguing. They wanted to argue with each other. Maybe they stayed up all night thinking of their points. Picture them in a room full of more arguing pairs, waving their hands, pointing their fingers, raising their voices, gesticulating wildly. Why are they doing that? They work hard at jobs or at school; they have families; they're tired. But they make a space in their day to come here to debate with one another. What in the world for?

Ok. Ready for this one? The answer is that they argue so as to get closer to G-d. I kid you not. For hundreds of years that's what we Jews have been doing. Let me clarify. G-d gave us an Instruction Book 5763 years ago. The times were different then, so G-d, in His wisdom, didn't get too specific about details. He gave us the principles, the methods of analysis, and secrets for uncovering layers of meaning. Then He left it up to us to struggle with their application in today's world. That's our challenge: How to figure out what G-d wants of us today. So I might have one opinion, you another; I might interpret a sentence one way, you another. And that is not merely okay; that is delightful; that is perfect. Because that is how we'll figure out what G-d wants. In fact, if you have insights into Torah that I don't have, it's your obligation to assert your position-and mine to take seriously what you say. That way we can arrive closer to the Truth.

So, you're going to ask me, how does that explain the necessity for Chaim Yankel to argue with Moishe Leib about best use of the Building Fund? The answer follows from the point above: All we really want is to get closer to G-d, to His Truth. As good children, we want very much to do His bidding. We want to do what's right. Sometimes we don't realize that's what we're doing, but our unawareness doesn't invalidate its underlying truth. You have to admit, we argue because we care. And that's a good thing.

A long time ago, we stood at Mount Sinai to receive the Torah and we were as one person with one heart. What held us together? Simply, our anticipation of receiving the Torah. The Torah itself would define us as a people, as one. We were united spiritually in the most exciting moment of national existence. We were one. As we have gotten farther away from receiving the Torah, confusion is bound to have set in. That's understandable. So we argue in our quest for clarity. May we continue to argue in our search for Truth, and may we recognize our fundamental unity in the midst of that search.