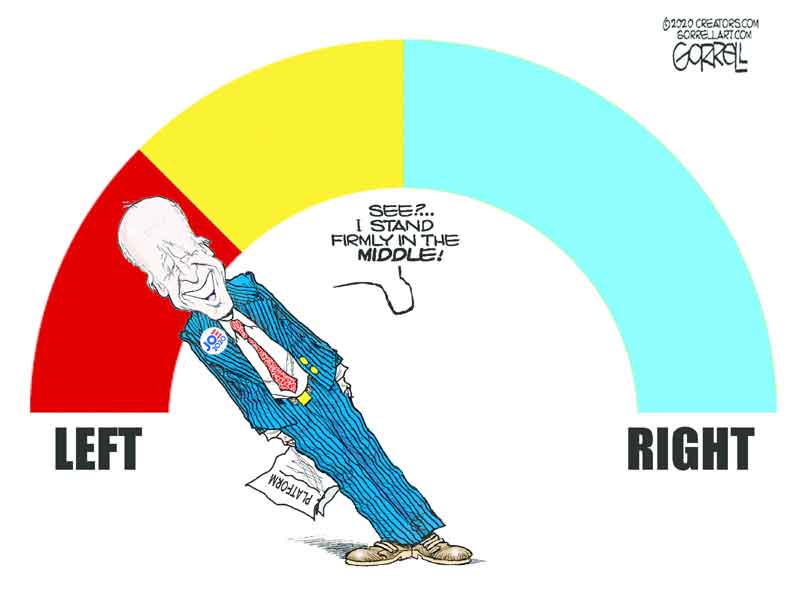 President Joe Biden is reportedly considering the first major tax increase in several decades. It won't be clear whether higher taxes are worth paying until more is known about the spending programs they would finance.

But it's not too soon to say that at least one aspect of Biden's approach doesn't add up: The promise to leave middle-class taxpayers alone.

A top White House economist made clear on Monday that Biden doesn't want to impose costs on anyone earning less than $400,000 per year. At the same time, the White House is likely to push for a higher corporate tax rate. These goals are incompatible. If the corporate rate goes up, it will reduce the incomes of the middle class.

The corporate tax rate was lowered from 35% to 21% as part of the 2017 tax law. Biden is said to be considering an increase to 28%. Tempting though it is to wish that faceless entities like corporations would shoulder the burden, sparing individuals the pain, in reality corporate taxes are always financed by people. The only question is which ones.

Economists used to think that the burden of corporate taxation fell almost entirely on the owners of capital in the form of lower share prices or, say, smaller dividend checks.

That view became outdated as it became easier for capital to cross national borders. Workers, by contrast, are much less internationally mobile. This leaves them more vulnerable when business owners are forced to pony up higher taxes on their business income.

A higher corporate rate lowers the after-tax return on additional investment. Less investment makes workers less productive, which in turn makes them less valuable. If workers are less valuable, then businesses will reduce efforts to attract and retain them, putting downward pressure on starting salaries and restraining wage growth. So the burden of the corporate tax increase would fall on workers in the form of lower wages.

Like any economic theory, this one has holes. For example, to the extent that corporate profits are generated by a brand name and not by additional investment, then a higher tax rate wouldn't be expected to lower wages. But the theory is the right place to start.

The idea that wages go down when business taxes go up is the consensus view of economists. The Tax Policy Center (a joint venture of the Urban Institute and Brookings Institution) assigns 20% of the burden of the corporate tax to workers in its economic models. The nonpartisan Congressional Budget Office concludes that workers bear 25% of the tax's burden.

The noisy and rancorous debates over the 2017 tax law will make it harder to sort out the pros and cons of Biden's proposal now because both sides of that debate retreated to political talking points that gave short shrift to economic knowledge.

It takes time for a change in the corporate rate to affect wages, but supporters of the 2017 cut argued that wages and incomes would quickly increase. Some corporations decided to credit the 2017 law when issuing one-time bonuses in late 2017 and 2018, rather than the tight labor markets that actually drove them. Opponents pointed to stock buybacks, arguing that corporations didn't use their tax savings appropriately, and ignoring the key fact that the mechanism by which tax changes affect wages is through changing incentives for future behavior.


That misleading debate will color Biden's attempt to raise the corporate rate. But the conversation will be even more distorted by former President Donald Trump's trade wars. Supporters of Biden's proposed corporate-rate increase will argue that the 2017 cut didn't boost investment or wages. That argument would be a lot less persuasive if Trump hadn't restrained investment through his trade policies, which acted to reduce business spending at the same time the 2017 tax law was encouraging it.

Still, the quality and winner of the political debate won't change the fact that workers — very much including those with incomes below $400,000 — will see their wages fall if Biden hikes the corporate rate. That's only one reason not to do it. Future prosperity will be strengthened if the U.S. continues to be thought of as the place for corporations to set up shop and do business. A tax rate at least as low as the ones in Europe and most other advanced economies is one way to help ensure U.S. global competitiveness.

If you tax something, you get less of it. Does the U.S. want less corporate income? I don't think so.

Biden's proposal to pay for new spending instead of financing it by piling on more debt is refreshing and laudable. But Mr. President, please look elsewhere to raise revenue.

Strain is a Bloomberg Opinion columnist. He is director of economic policy studies and resident scholar at the American Enterprise Institute.