The Very Model of a Modish Loser General Staff 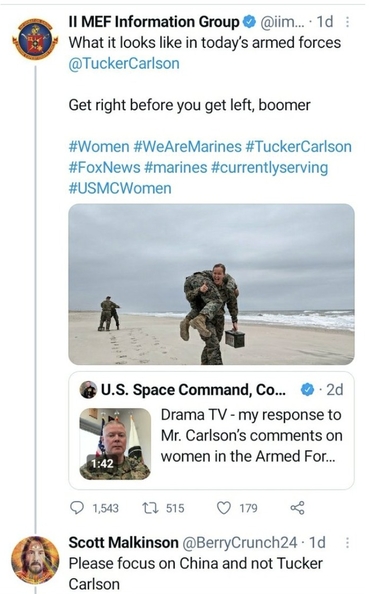 Having failed to get anywhere with the Taliban, the Pentagon is now going after Tucker Carlson. Who ought, in theory, to be an easier target.

It began last week when Tucker noted that Joe Biden had emerged from his basement for "International Women's Day" and held a White House event touting the US military's recent achievements on that particular front - including such brilliant innovations as better maternity flight suits for pregnant pilots. (Do the growing numbers of pregnant males get paternity suits - or is that still just a courthouse thing?)

Given that the brass no longer even try to win wars (our present negotiating position with the Taliban has dwindled down to: "Whatever you want - as long as we're allowed to stay running around this barren sod for another decade or two"), one might suppose it's relatively unimportant (except to the grim toll of wounded and dead, and their grieving families) whether the twenty-first century's endless unwon wars are lost by male, female or transgender soldiery.

On the other hand, in what's supposed to be an all-volunteer military, I don't recall the unborn kid raising his hand to sign on to be up there in the cockpit. Accepting that it's obviously far better for us to lose two-decade wars as diversely as possible, it still seems a very weird thing to be boasting about - even for a military that spent much of the twenty-first century filling every soldier's kitbag with a preferred guide to Afghanistan that proved to be an utterly fraudulent book of total bollocks with a 501(c)3 racket attached.

In response to Tucker pointing out the bizarre priorities of the world's wokest military, the Pentagon went full shock-and-awe on him:

The official government Twitter account of II Marine Expeditionary Force then weighed in, with the dispositive argument that Tucker is a "boomer":

'What it looks like in today's armed forces @TuckerCarlson. Get right before you get left, boomer,' the II MEF Information Group posted on Twitter, above a photo of a female soldier carrying another soldier on her shoulders.

'What it looks like in today's armed forces @TuckerCarlson

'Get right before you get left, boomer'

Tucker is not, in fact, a "boomer" - so just the usual human-intel failure there.

Oh, but they weren't done:

Come back when you've served and been pregnant

So shock-and-awe boils down to: You're a girly-man who couldn't take a third-trimester fighter pilot in a bar fight.

Yeah, tell it to the village headman in Helmand Province.

"I like generals!" enthused Trump at the dawn of his administration. After being on the receiving end of John Kelly and Mad Dog Mattis, he wouldn't say that today. Even so, the world's supposed most powerful military going to war on a supposed boomer who's never been with child might seem, even for the Pentagon, a complete waste of time. Yet, to look on the bright side, it could have the benefit of bringing into public discourse a long overdue conversation about one of the central issues of our time:

The American way of war.

This is no reflection on the men and pregnant women on the frontlines (for whom Alan Clark's famous formulation of the Great War, "lions led by donkeys", might have been created) but on the fellows who run the joint, and have run it into the ground. We're supposed to be excited because the newly appointed Lloyd Austin is the first African-American to serve as Defense Secretary. Of more relevance is that until two months back he was a board member of Raytheon, the high-tech armaments contractor that develops ever more advanced technology to ensure that we lose to inbred goatherds with fertiliser even more expensively.

In other words, Lloyd Austin is business as usual, whatever his identity-politics points.

Meanwhile, China's winning the real war without a shot being fired.

The hollowing out of the Pentagon by wokery is merely a modish wrinkle on decades of failure. Ten years ago, Time magazine quoted yours truly thus:

America wages war like the world's biggest NGO – a do-gooding non-profit for which armed conflict is not the sharp end of a nation-state's interest but an act of global stewardship. It's war as the ultimate NPR fund drive: For a pledge of $12 billion, we'll open a schoolhouse in Kandahar and a women's-health clinic in Shah Joy and give everyone a copy of Three Cups of Tea. Six months after the last NATO soldier leaves, there will be no women at the women's-health clinic and no schoolgirls at the schoolhouse. We came, we spent, we left no trace.

That Time piece concludes with my observing the "very palpable evolution of America's soldiery into yet another victim group" - which is quite an achievement for a body that accounts for forty per cent of all military spending on the planet. And yet the über-woke Tweets of recent days are almost a parody of activist grievance-mongering.

Back on the ground, the Taliban now control more territory than at any time since October 2001, but as long as Raytheon gets its "ten per cent for the big guy" there's no reason we can't string that out till the fiftieth anniversary. Meanwhile, since January 6th all the experts agree the real war is on the home front - so thank God we can still take down retired thirty-year Naval chaplains.

As Tucker pointed out on Friday, if they take the Afghan approach with him, in five years he'll bestride the fruited plain like a colossus. Allahu Tuckbar!