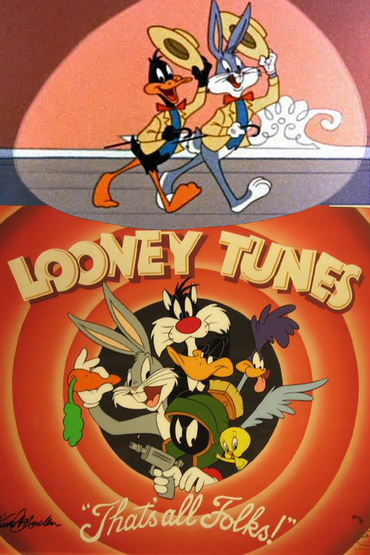 I love Looney Tunes, and I couldn't be less interested in discussing whether Pepe LePew is directly responsible for Andrew Cuomo #MeTooing his staffers or Joe Biden tweaking grade-school nipples. Even for a self-moronized suicide cult like 21st century western civilization, that's too stupid - even more stupid than, say, crediting Yosemite Sam continually shoving dynamite down his pants for our societal death wish. I miss the grand comic spirit of Looney Tunes, and the high artistry they brought to it. So screw the wokesters and let's spend our Saturday movie date with a certain anthropomorphized lagomorph and the other enduring, indestructible stars of the Looney Tunes funny farm.

It was their defining animator Chuck Jones who liked to tell the story of a young man who came to work with him in the Warner Brothers animation department and sent a letter home to his grandmother proudly telling her that he was writing scripts for Bugs Bunny. "I can't understand why you're writing scripts for Bugs Bunny," she replied. "He's funny enough just as he is."

Gran'ma had a point. Some art forms are heavy with authorial presence; others wiggle free of their creator, so popular, so known that the idea of anybody sitting down to "make" them seems absurd. But the Looney Tunes guys were more wholly "made" than their dull counterparts at Disney - Mickey, Donald, Goofy, Minnie, etc. In Bugs' case the buck stops here - on the desk of Chuck Jones, the producer and director who made the Merrie Melodies merrier and the Looney Tunes loonier.

In their heyday, the Warner Bros progeny - Daffy Duck, Road Runner, Wile E Coyote, Porky Pig, Tweety, Yosemite Sam - were never crippled, like Disney's dullards, by a respectability gene: they exist in a whirr of primal activity - they need to eat, they hunt, they seek to kill - the same narrative played over and over in ever more exotic locales, from opera stage to outer space, their comic ingenuity prompted by no more than the appeal of a punning title - "Hare Conditioned", "My Bunny Lies Over the Sea", "Beep Prepared", "Louvre Come Back to Me".

Even the minor players are fully conceived, Pepe Le Pew, the bon vivant French skunk who starred in "Odor-able Kitty" (1945), "For Scent-imental Reasons" (1949), "A Scent Of The Matterhorn" (1961) and many others. A sophisticate skunk who talks like Charles Boyer and keeps hitting on cats is a fine comic idea: "He's like most of us men," said Jones. "He doesn't know he's a stinker." Which ought to be the end of it.

For Looney Tunes, character was everything. Once you knew who they were, how they walked or, more to the point, how they ran - Elmer Fudd, Bugs, Daffy, Sylvester and the Coyote are often perpetually in motion, each with his own distinctive running style - once you knew all that, the rest was easy. Their physical movements had little to do with the animals they were supposed to be. After some critics unfavorably compared Jones' prosaically "realistic" cartoons with those interminable abstract animated dronefests from Eastern Europe, he drew up some point by point comparisons between the Warner characters and their species. There's a very funny picture of a real rabbit in his natural stance, on all fours, hind legs bunched up, and Bugs concertinaed into the same position. The poor guy looks ridiculous. Bugs is a two-legged rabbit, as Sylvester is a two-legged cat, never more so than when he's chasing after Tweety arms outstretched to catch his prey. I have coyotes outside my house from time to time and, from what I can tell, Wile E is a pretty good approximation. But even he improves on the original with his bloodshot eyes.

Plot and character were also supported by a full orchestral score, arranged by the prolifically gifted Carl Stalling, who invented much of the musical cartoon language we now take for granted (the pizzicato footsteps when Sylvester's creeping up on Tweety, etc).

But the Tunes also had occasional numbers in their own right â€“ Bugs and Daffy's marvelous tap duet to "Tea For Two". And they often had amazing backgrounds, too (look at Maurice Noble's designs in Duck Dodgers In The 24Â˝ Century, beginning with the giant eye that follows Daffy into the space station).

The classics are beloved: "Rabbit Of Seville" (1949), with Elmer and Bugs rewriting Rossini; "What's Opera, Doc?" (1957), with Bugs as Brunnhilde pursued by Elmer as Siegfried. Looney Tunes prospered at a time when a mass audience could be relied upon to know something of the core repertoire and conventions of opera, ballet, the fine arts. It's trickier doing that now, when no one knows nothing but rock'n'movies'n'TV shows. On the other hand, Looney Tunes can also be said to have pioneered, animated shorts-wise, the post-modern. See "Duck Amuck" (1953), in which Daffy struggles to hold the narrative together as the hand of a malevolent cartoonist keeps intruding to switch backgrounds, remove props and humiliate the duck with embarrassing costumes. At the end of the picture, the camera pulls back to reveal that the sadist behind Daffy's misfortunes is none other than Bugs himself.

Chuck Jones is usually hailed as the preeminent genius of the Looney Tunes/Merrie Melodies stable: One thinks of "One Froggy Evening", which Spielberg calls the Citizen Kane of animation and whose "Hello, Ma Baby!" sequence Mel Brooks paid hommage to in Space Balls. But look at Looney Tunes' underrated Number Two helmer, Fritz Freling. I don't think there's a funnier six minutes in motion pictures than "High Diving Hare", in which a high-dive act fails to show up and Yosemite Sam demands Bugs Bunny take his place. No matter how often Sam forces Bugs up the ladder and on to the diving board, somehow it's always Sam who ends up plunging off and into the tub of water, or in the general vicinity thereof. I especially enjoy the bit where Bugs forgets to refill the tub and so throws the water over after Sam's halfway down. The sequence where Sam is falling through the air trying to force the liquid to go down faster so he'll have something to land in is a masterpiece of comic ingenuity and timing, even if, in the end, he misses the tub and crashes through the floorboards.

Likewise, Freling's "Canary Row", in which Sylvester the puddy tat, disguised as a hotel bellhop, snaffles Tweety's covered cage down from Granny's room and into the back alley, only to find that it's not Tweety but Granny waiting under the cover to thwack him. The sight of Granny hunched up in the cage with her umbrella drawn is one of the all-time great sight gags - and, as Sylvester would surely confirm, "You're not jutht whithlin' dickthie, brother."

A couple of decades back, Warner Brothers attempted to recapture the magic in Looney Tunes: Back In Action, pairing the aging megastars Bugs Bunny and Daffy Duck with live-action Johnny-come-latelys like Jenna Elfman (TV's Dharma), Brendan Fraser (The Mummy) and Timothy Dalton (the Bond whose license to kill almost killed off the franchise). The sense of two worlds colliding is best caught in an exchange when Elfman and Fraser with Bunny and Duck in the back seat are driving through Vegas pursued by the diminutive irascible gunslinger Yosemite Sam and his henchmen. As Sam and co pull up alongside and try to toss dynamite into the car, Miss Elfman is bewildered: "Dynamite? Who has dynamite?"

In the Looney Tunes world, everyone has dynamite. If the predatory Sylvester's slavering jaws are covering the entrance to Tweety's bird house, the little canary always has a stick of dynamite on hand to roll down the cat's gullet. If Daffy and Porky Pig are in outer space arguing with Marvin the Martian over who got to Planet X first, they too have a stick of dynamite on hand with which to dispose at least temporarily of the Marvin problem. So I liked that line of Jenna Elfman's. But in the end all the live humans - and even the cartoonish humans like Steve Martin and Joan Cusack - just got in the way, and the film never swam into focus.

Which is one thing the originals never lost. The six-minute Looney Tunes should be taught in comedy class as textbook examples of the first two rules of funny business: make sure you know what the joke is, and then make sure you stick to it. In "Dripalong Daffy" (1951), it's the wild west: it opens with Porky singing a loping western ballad, ends with a one-horse town joke, and in between is the scene where Daffy draws his six-shooters and accidentally pulls his chaps off leaving himself in his underwear, plus the moment when, having strode into a saloon full of bad hombres chewing stogies and playing poker, he attempts to get their attention:

"Dripalong Daffy's muh name. Anybody care to shoot it out?"

Nobody responds. They're still boozin'n'smokin'n'dealin'.

"Man to man? Under Western skies? West of the Pecos?"

He still can't get their attention.

Not long after that live-action feature, Warner Bros repackaged the cartoons in a series of box sets called the Looney Tunes Golden Collection. Volume One - me and the kids loved it. Volume Two - likewise; Daffy, Bugs, Porky, beautifully restored, tons of special features. And then I bought Volume Three, and for some reason, this set begins with a special announcement by Whoopi Goldberg explaining what it is we're not meant to find funny. "Unfortunately at that time racial and ethnic differences were caricatured in ways that may have embarrassed and even hurt people of color, women and ethnic groups," she tells us solemnly. "These jokes were wrong then and they're wrong today" â€” unlike, say, Whoopi Goldberg's most memorable joke of the twenty-first century, the one at that 2004 all-star Democratic Party fundraiser in New York where she compared President Bush to her, um, private parts. There's a gag for the ages.

I don't know what Whoopi's making such a meal about. It's true you don't see many positive images of people of color on Looney Tunes, but then the images of people of non-color aren't terribly positive either (Elmer Fudd, Yosemite Sam). Instead, you see positive images of ducks of color, roadrunners of color and tweety birds of color. How weirdly reductive to be so obsessed about something so peripheral to these cartoons that, in order to innoculate himself from all the whiners, the Senior Executive Vice-President of Pre-emptive Prostration rustles up a person of color - no, better make that a woman of color - and then you stick the same dreary Whoopi Goldberg health warning on all four DVDs in the box. And don't think about hitting the "Next" button and skipping to the cartoons: You can't; you gotta sit through it. It's like Friz Freling with Bugs on the diving board: The same thing over and over. But with no variations. And entirely unfunny.

One day, they'll all be banned, so treasure them while you can. In Hollywood, flesh-and-blood stars and starlets come and go - where are Jenna Elfman and Brendan Fraser now? But an A-list rabbit, that's forever.

Or he should be. Here's hoping that's not all, folks.