Did Bloomberg give ammunition to anti-Semites? 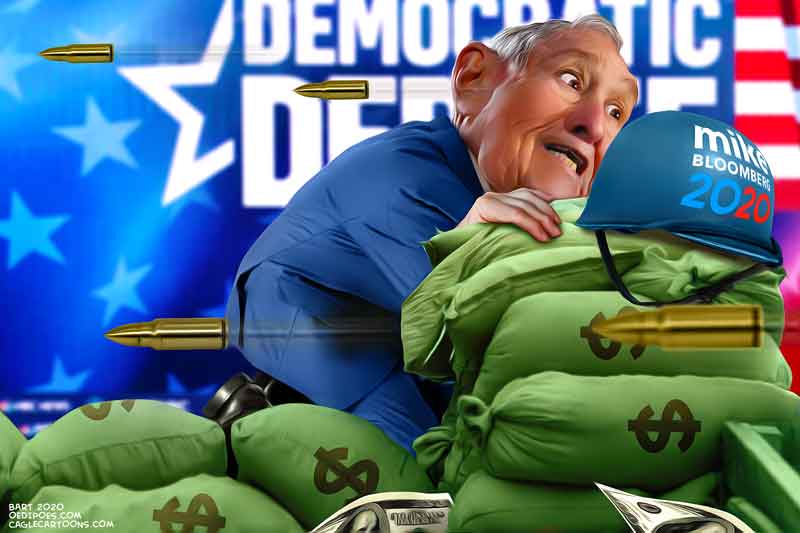 There are a lot of people who are relieved that Michael Bloomberg has dropped out of the Democratic primary race, and not all of them are named Biden.

The withdrawal of the former mayor of New York City gives a boost to former Vice President Joe Biden. Bloomberg's jumping on the Biden bandwagon removes the last competition for more moderate Democratic primary voters and lessens the chances that Sen. Bernie Sanders will become the Democratic nominee. That's a relief for both centrists who fear the Vermont Socialist can't beat President Donald Trump, as well as supporters of Israel who have been rightly outraged by Sanders's slanderous attacks on AIPAC and Israeli Prime Minister Benjamin Netanyahu.

But Bloomberg's exit from the presidential contest also brings a sigh of relief to those who feared that his wild spending was providing ammunition to anti-Semites.

The idea that Jews buy political influence to pursue secret agendas has been a trope of anti-Semites dating back to the publication of the fake Protocols of the Elders of Zion at the start of the 20th century. It's been revived in various forms, including by some anti-Semitic supporters of Sanders, such as Rep. Ilhan Omar (D-Minn.), who claimed that supporters of Israel were purchasing Congress in her now famous quip: "It's all about the Benjamins."

Indeed, the fact that Bloomberg and two other billionaires with Jewish ties, George Soros and Tom Steyer (who has a Jewish father and who also recently ended a futile presidential bid) have been the largest donors to Democratic candidates and liberal political causes in recent years has created an unhealthy dialogue about campaign finance and anti-Semitism. The slightest hint of criticism of the trio — who have invested large sums promoting liberal politicians and policies — has been seized upon as evidence of Jew-baiting.


That was also true with respect to Bloomberg's astounding spending on his presidential campaign. Indeed, even a gentle jibe from Sen. Ted Cruz (R-Texas) about how Bloomberg could not only direct coverage of his campaign by his own media empire, but was purchasing other media, provoked Anti-Defamation League CEO and national director Jonathan Greenblatt to denounce the senator for encouraging anti-Semitism. Greenblatt, a partisan figure who has done much to trash the ADL's reputation, was dead wrong, but his smear of Cruz was indicative of the way some on the left have developed a hair-trigger response to any discussion of the way Bloomberg, and especially Soros, spend money on politics.

But given the scale of Bloomberg's spending, there was no way to avoid a discussion about the topic.

Reportedly, the billionaire spent approximately $570,000 on television ads alone. He spent even more on staff and other campaign costs, raising his total expenditures to what might have been somewhere in the vicinity of $1 billion. That sum dwarfs any previous presidential effort. Bloomberg financed all of this out of his own pocket and with an estimate of approximately $55 billion, it's clear that doing so was no hardship.

That he failed miserably is credited to his inept performances in presidential debates, though the postmortem on his candidacy involves more than just a reminder that presidential politics is not a sport for those who are unwilling to do the heavy lifting of retail campaigning and debate preparation.

The moral of the Bloomberg candidacy is one that is heartening for those who worry about the role money plays in democracies. It may be true that no one can successfully run for any major office without serious financial backing. But Bloomberg has proven that money by itself cannot purchase the presidency, even when it is spent at an astounding rate.

If you calculate his spending on TV ads alone and divide by the number of Democratic convention delegates he won, that amounts to approximately $11 million per delegate — a ludicrous sum that beggars any previous such effort.

This pathetic return on his investment is also a reminder to those who think that American democracy is being hacked by Russian meddling, not to exaggerate the impact of campaign spending.

According to the report issued by Special Counsel Robert Mueller about the 2016 presidential election, Russian operatives spent approximately $1.2 million per month on Facebook ad campaigns and other efforts that were aimed at discrediting Hillary Clinton, and boosting the efforts of then candidate Trump and Sanders's primary challenge to the eventual Democratic nominee.

This was both appalling and illegal. But it's difficult to make a rational argument that the Russian ads — many of which were barely intelligible and mostly seen by a relatively small audience — "stole" that election when Bloomberg's astronomically larger spending on far more sophisticated and expertly targeted ads couldn't even purchase him a competitive primary campaign, let alone the Democratic nomination.


That's a good reason to ignore the hysteria about Bloomberg's spending, even if it was unseemly. More to the point, the whole notion of anybody purchasing the American political system is bunk. In particular, that means Israel-bashers should understand that if the Jewish state has the support of most Americans, it's not because of AIPAC or donors, but simply because most Americans support Zionism and the Jewish state.

Nor should we be quick to demonize spending on political speech even if it is sometimes, as Bloomberg proved, both egregious and an exercise in futility. Although anti-Semites continue to harp on the notion of Jewish money buying influence, that shouldn't stop anyone using the right of free speech to advocate for their ideas.

Indeed, advocacy for causes or candidates is exactly what America's Founding Fathers were thinking about when they wrote the First Amendment to the U.S. Constitution, even if they couldn't have imagined television or social media.

Michael Bloomberg may have wasted a great deal of money in recent months, but he shouldn't be blamed for helping anti-Semites. Nor should we castigate those who have lampooned his profligacy. Instead, we should celebrate the fact that though imperfect, democracy still works even when some try to game the system.