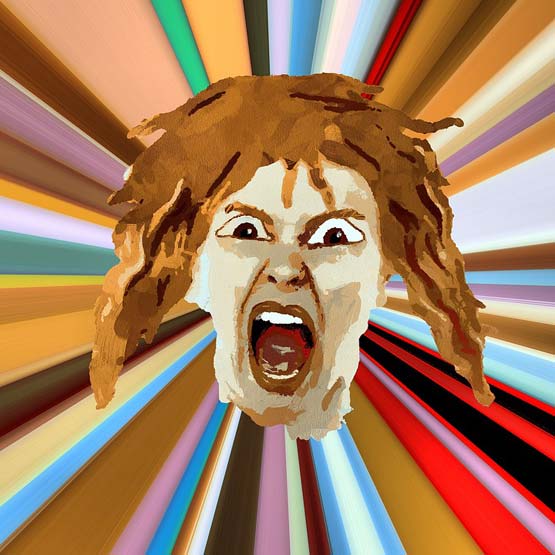 A Springfield, Ohio, man spotted a van — guess what color — that he thought was trying to kidnap a girl, and he ran off to chase it in the most modern of ways: livestreaming the whole thing on Facebook. The van got away, but the man posted the video, which went locally viral.

Here we must commend Springfield's WHIO TV 7 for checking to see if, indeed, there had been any substantiated reports of actual or near-kidnappings. Police lieutenant Lou Turner told reporter Katy Andersen that the cops had received not a single complaint. Let's hear it for a reality check!

The two-minute story is a great piece of paranoia-puncturing — until the very end, when Anderson says, "Anyone who sees something suspicious or is a victim to a crime like this is urged to call police immediately to report it."

The fact that the reporter ended her otherwise sensible story this way means that Frank Furedi has a deep point that we should pay heed to. Furedi is a professor emeritus of sociology at the University of Kent in England. He wrote "Paranoid Parenting" back in 2002, long before most of us (except for Nick Gillespie in 1997) started noticing the trend that would later be dubbed helicopter parenting.

But more recently, Furedi wrote, "How Fear Works." And one of the fear-reinforcing trends he noticed was the way a certain type of story becomes popular in a culture. And in ours, the story of a kid snatched off the street and sold into sex slavery is one that is so incredibly resonant the media relies on it as a surefire hit.

From Liam Neeson movies to "Law & Order" episodes to Halle Berry's "Kidnap," it's a reliable fictional plot. But it's also a staple of the news, whether the story is real and tragic, like the terrible case of 6-year-old Faye Swetlik, who was murdered last week, presumably by her neighbor, or whether there is no story there at all.

When there actually is no story, the media is faced with a problem: How do you report when nothing happened? Easy! You report on what MIGHT have happened, had the worst-case scenario occurred. To wit: At the beginning of every school year, I wait for a story somewhere in America where a bus driver accidentally drops a kid off at the wrong bus stop.

This completely anodyne event is often reported as not only newsworthy but also as a near-death experience. The reporter interviews a grim-faced cop, relieved nothing terrible happened, and a mom usually says something like, "When I think of all the HORRIBLE THINGS that COULD have happened, we are just thanking God our child is safe."

As if kidnappings and murders are so common that the odds are stacked against any child walking home half a mile.

So, reporters take a story of safety and turn it into one of danger, reinforcing the storyline we're getting addicted to: A child outside is a child threatened.

Some readers buy mystery novel after mystery novel because they love the genre. Romance readers buy a new romance every week. They KNOW the brash young billionaire is going to marry the secretary or the governess or maybe the horseback riding teacher. They just want to hear that story again.

In America, for some reason, we are hungry for sickening stories of innocence violated. When, instead, we've only got the story of some plain old van, we turn it into the story of innocence that wasn't violated but could have been so it qualifies as a cautionary tale.

If you are victim of a "crime like this," good news: You are not the victim of a crime! But your brain is being kidnapped and held in a dystopian story cycle from which there is no escape.

Unless you stop watching.