The Trump-Russia collusion hall of shame 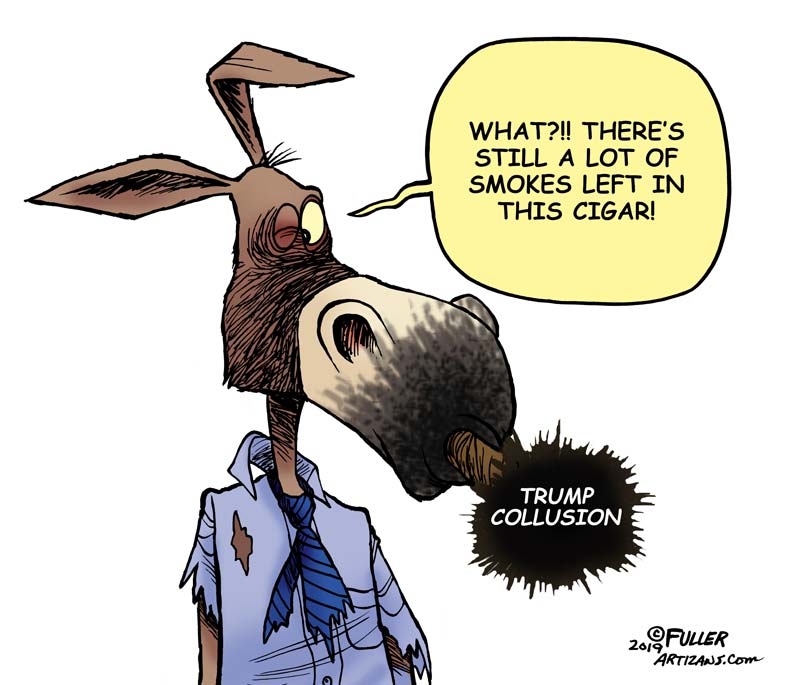 The news that special counsel Robert Mueller "did not find that the Trump campaign, or anyone associated with it, conspired or coordinated with the Russian government" has left a lot of people in Washington with a lot of explaining to do.

Put aside the rogues' gallery of reporters and pundits who assured us that Donald Trump had conspired with Vladimir Putin to steal the presidency. What is most insidious are those who did have access to classified intelligence and led Americans to believe that they had seen what we could not: actual evidence of Trump-Russia collusion.

Recall that in 2016, Senate Minority Leader Harry Reid, D-Nev., released a letter to FBI Director James Comey claiming the FBI had proof of Trump-Russia collusion. "In my communications with you and other top officials in the national security community, it has become clear that you possess explosive information about close ties and coordination between Donald Trump, his top advisors, and the Russian government," Reid declared. When asked what information Reid was referring to, a spokesman said, "There have been classified briefings on this topic. That is all I can say."

Trump has called for House Intelligence Committee Chairman Adam Schiff, D-Calif., to resign. He is absolutely correct. Schiff repeatedly said that his committee had dug up "plenty of evidence of collusion or conspiracy." In March 2017, he said on "Meet the Press," "I can't go into the particulars, but there is more than circumstantial evidence now" and last May he told ABC that Trump's Russia conspiracy is of "a size and scope probably beyond Watergate."


Schiff is a disgrace. But he is not alone.

Rep. Eric Swalwell, D-Calif., a member of the Intelligence Committee, said, "In our investigation, we saw strong evidence of collusion" and declared Trump an agent "working on behalf of the Russians." House Judiciary Committee Chairman Jerrold Nadler, D-N.Y., claimed, "It's clear that the campaign colluded, and there's a lot of evidence of that."

Sen. Richard Blumenthal, D-Conn., a member of the Judiciary Committee, assured us last year that "the evidence is pretty clear that there was collusion between the Trump campaign and the Russians."

Sen. Ron Wyden, D-Ore., a member of the Intelligence Committee, said, "There is no longer a question of whether this campaign sought to collude with a hostile foreign power to subvert America's democracy."

And recently, the committee's vice chairman, Sen. Mark Warner, D-Va., declared that "enormous amounts of evidence" exist of collusion between Trump and Russia and that "there's no one that could factually say there's not plenty of evidence of collaboration or communications between Trump Organization and Russians." Except for Mueller, of course.

These comments by people with access to intelligence were shameful. But the most sinister of all is John Brennan, who used his authority as former CIA director to suggest that Trump was a traitor and a compromised Russian asset. After Trump's Helsinki summit, Brennan declared "he is wholly in the pocket of Putin." When challenged by Chuck Todd on "Meet the Press," Brennan stood by his assessment. "I called [Trump's] behavior treasonous, which is to betray one's trust and aid and abet the enemy, and I stand very much by that claim."


This month, MSNBC's Lawrence O'Donnell told Brennan this investigation was "developing while you were still on the job" and asked, "Did you see enough at that stage to believe ... that that would result in indictments?" Brennan replied, "I thought at the time there was going to be individuals who were going to have issues with the Department of Justice. Yes."

In a New York Times op-ed, he wrote that "Trump's claims of no collusion are, in a word, hogwash." Now, Brennan feigns contrition. "I don't know if I received bad information, but I think I suspected there was more than there actually was," he said, adding, "I am relieved that it's been determined there was not a criminal conspiracy with the Russian government over our election."

Hogwash. He wanted it to be true, and he relied on his CIA credentials to convince Americans that it was. That is a violation of the public trust. Trump was right to revoke Brennan's security clearance. He is among the worst of the worst, the Trump-Russia collusion hall of shame. We have long since passed the point where Americans expect objectivity from the press. But we should hold our elected and appointed officials handling sensitive national security issues to a higher standard.