Can the Media Ever Earn Back Our Trust? 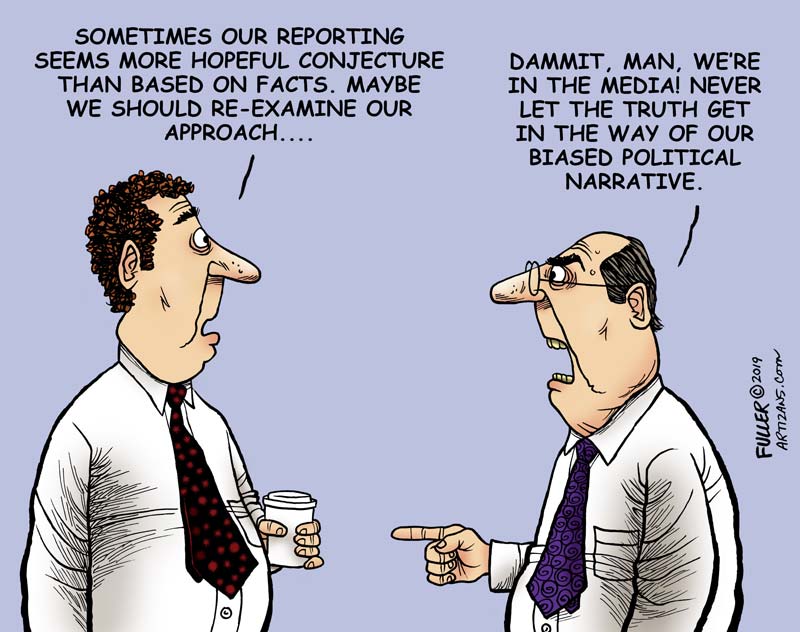 After it was revealed on Sunday that the two-year investigation conducted by special prosecutor Robert Mueller found no collusion between the Trump campaign and Russia, the finger pointing began. This time, the national media was under the microscope. It's one thing to hear baldly partisan idiocy from the opposing political party and its candidates — we expect that. It's another thing altogether when crazed accusations are being spewed by the press 24/7/365 as if they're fact.

Voices as disparate as Rich Lowry, editor-in-chief of the conservative National Review, and Glenn Greenwald, co-founding editor of the nonpartisan (but leftish) The Intercept, have criticized the media this week for their obsession with the theory — now thoroughly debunked — that Hillary Clinton lost the 2016 presidential election because Donald Trump and his team colluded with Russians. (Greenwald has been a consistent and vocal critic, warning about the dire consequences for press credibility; in January, The Intercept published "Beyond BuzzFeed: The 10 Worst, Most Embarrassing U.S. Media Failures on the Trump-Russia Story.") The Daily Beast ribbed MSNBC star (and collusion-theory devotee) Rachel Maddow with a "Now What?" headline. CNN's president, Jeff Zucker, took widespread flak for his defense of CNN's Trump/Russia coverage, saying: "We're not investigators. We're journalists. Our job is to report the facts as we know them, which is exactly what we did."

That's no defense. First, most people assume that journalists do some investigating before they report. That assumption is what gives news reports their credibility with the public. (And the best journalists demonstrably do investigate.) Second, it's not "journalism" to find hucksters like "creepy porn lawyer" Michael Avenatti who are willing to tell your audience what you clearly want it to believe. It was spectacular karma that Avenatti — who appeared on CNN and MSNBC a whopping 108 times in just over two months last year — was arrested on charges of extortion within 24 hours of the Mueller investigation announcement. Third, much of what the press was "reporting" wasn't fact; it was — as we now know — wild-eyed speculation.

But anyone who thinks that extreme media bias is a recent phenomenon — or even that the Trump/Russia fixation was the worst example of it — simply isn't paying attention.

The press's bias against Republicans and conservatives has been this bad at least since Richard Nixon was president. (In his column this week, titled "We've All Made Fools of Ourselves — Again," New York Times columnist David Brooks opines that Watergate was the beginning of what he calls "scandal politics.") Gerald Ford was lambasted as a buffoon. If Ronald Reagan wasn't being accused of being a warmonger, he was an "amiable dunce." There was no love lost for George H.W. Bush, and his son George W. Bush was called "Hitler," accused of staging the 9/11 attacks, and of falsifying information about weapons of mass destruction to justify the war with Iraq.

Republican candidates who win elections typically do so in spite of their negative press coverage (Trump may very well be the penultimate example of that), and those who lose often have the press to thank. In 2008, Arizona Sen. John McCain and his running mate, former Alaska Gov. Sarah Palin, were ridiculed by the press. The media was only too happy to blanket the airwaves with allegations that 2012 president candidate Mitt Romney denied employees access to lifesaving cancer treatments, and that his running mate, Wisconsin congressman Paul Ryan, wanted to "push Granny off a cliff."

And the blatant derision with which Republicans are treated stands in stark contrast to the kid glove treatment the media gives Democrats. (Vanity Fair's cheesecloth cover story about former Rep. Beto O'Rourke is almost as bad as the Fourth Estate's former fondness for portraying Barack Obama as G od.)

The current humiliation may be enough to prompt some of the press to try and earn back the public's trust. If so, here are a few suggestions for ways they could start:

1. Stop portraying your personal opinions as fact — or else, move out of news reporting and into editorials.

2. It isn't "reporting" to find 20 people who think the way you do and quote them.

3. Yes, you are investigators. Do some legwork before you report.

4. Follow the facts wherever they lead — even if it is to a conclusion you don't personally like.

5. It is your job to report events, not to try to shape them.

6. Stop ignoring stories and hiding facts that paint your side, your preferred candidates or elected officials, or your favorite celebrities in an unfavorable light.

7. Don't surreptitiously give debate questions to the politicians you're rooting for — or get their approval before you publish.

8. If you're a debate moderator, moderate . Don't jump in and argue for one side.

9. Consider the very real possibility that the political view you don't share or the policy proposal you don't agree with may have some merit. Again, research comes in handy here.

10. Remember those principles you said you have? Find them again, and stick to them. In other words, if things like infidelity, sexual assault, abuse of government power, commission of crimes, corruption and fraud matter, then they matter for all politicians, not just the ones you don't like.

Finally, there's no need to take the "my country, right or wrong" position. But if you can't defend the U.S. Constitution, you're not worthy of the job.