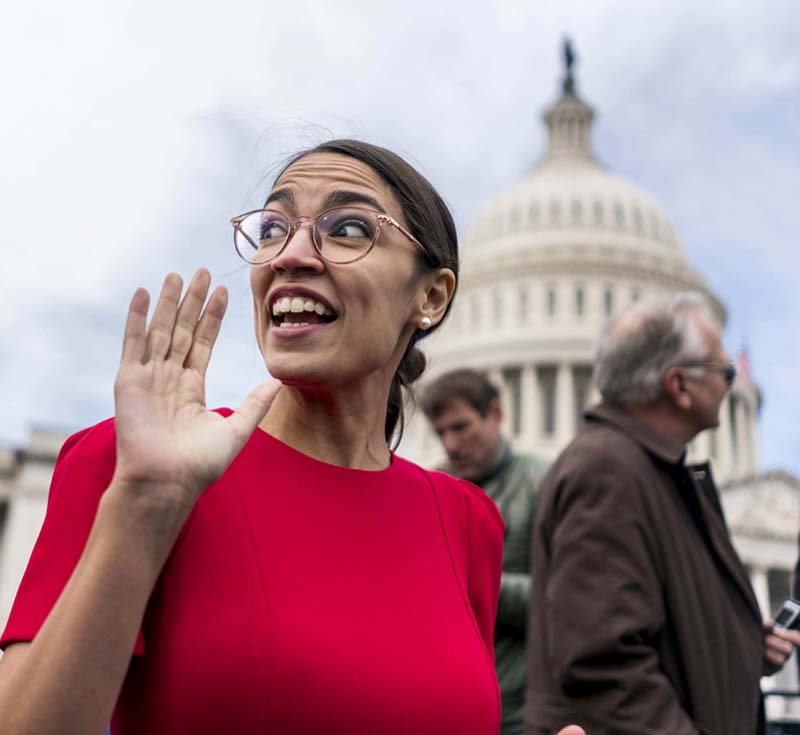 Over the last two months, the letters AOC have become as familiar as the letters AOL were two decades ago. With the same fervor once shown by Russian intelligentsia for the writings of Karl Marx and Freidrich Engels, the far-left wing of the Democrat party has flocked to the socialist message of Alexandria Ocasio-Cortez.

Indeed, if AOC's influence continues to spread, the term "moderate Democrat" may soon become an anachronism.

Predictably, the Republican party has responded by portraying the freshman congresswoman as a latter-day marxist, a starry-eyed utopian, and the epitome of economic irresponsibility. At last week's Conservative Political Action Conference (CPAC), virtually every speaker attempted to bury Ms. Ocasio-Cortez beneath a mountain of contempt, ridicule, and vitriol.

Message to Republicans: When you throw fuel on a fire, you end up with a bigger fire.

This has happened before. In 2003, Fox News filed suit against Al Franken for violating their registered trademark in the title of his book, Lies and the Lying Liars Who Tell Them: A Fair and Balanced Look at the Right. Not only did the judge throw the lawsuit out of court, but the publicity rocketed Mr. Franken's book from #489 on Amazon to #1. It's arguable that Fox even tilted the scales to aid Mr. Franken in becoming senator of Minnesota; in 2008, he defeated his opponent by a mere 312 votes, or 0.01%.


More recently, the media's perseveration on Donald Trump in 2016 provided him with literally a billion dollars of free advertising. The hurricane of vilification enabled Mr. Trump to suck all the air out of the room, asphyxiating his Republican challengers and strangling Hillary Clinton in the presidential election.

It's a simple lesson, but one that zealots have a hard time learning. The biggest favor you can do for any political opponent is to make her into a martyr. Especially when she is young, attractive, and media savvy.

The appearance of persecution, even justified persecution, generates a David-vs-Goliath narrative that blossoms into mystique, galvanizing passionate support among those who might otherwise have remained tepid, or even contrarian.

The sages of the Talmud admonish us to know how to answer a heretic. But knowledge is not the same as action. To dignify a crooked argument with a rebuttal, no matter how cogent, often boomerangs by creating the illusion of credibility. Branding a little-known figure as Public Enemy #1 is likely to generate a buzz of curiosity and controversy that raises him or her from obscurity to celebrity.

Now imagine if conservative legislators and pundits removed all references to Ms. Ocasio-Cortez from their speeches and editorials. What if instead they refuted socialist ideology on its lack of merit and exposed Pollyanna programs as unrealistic with calm facts and cool logic rather than disdain and derision?

By doing so, they would likely throw their Democrat adversaries into turmoil, leaving them to anxiously wring their hands over how to deal with the photogenic New York progressive who is simultaneously enamoring idealistic extremists and alienating pragmatic moderates.


When we lower our voices and raise the substance of our arguments, we allow fire-breathing antagonists to paint themselves as rabid ideologues in contrast to our cool and composed demeanor. It's easier, and far more effective, to allow them to discredit themselves.

Even better, we might gently coerce adversaries into reining in their own rhetoric. By doing so, we increase the chances of finding common ground, working toward a meeting of minds, and uncovering solutions to our collective problems.