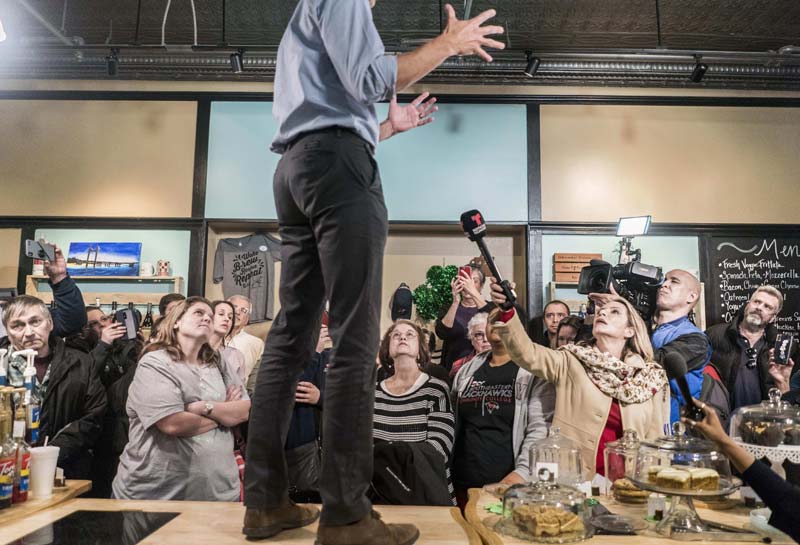 Melina Mara for The Washington Post
Many Democrats are thrilled that former Rep. Beto O'Rourke of Texas has tossed his hat into the presidential ring. Ever since his near-upset of Sen. Ted Cruz last November, Beto (with whom we all seem to be on a first-name basis) has been a media darling — and scarcely a profile can be written about him without mentioning his charisma.

"Charisma has propelled him far," says Vox. "Beto's been compared to Obama and been confused for a Kennedy." A Forbes story details his "seven steps to charisma." He's "young and charismatic," says Politico.

You get the idea.

It's easy to understand the longing for a charismatic candidate. Crowds turn out, voters get excited — young voters especially — and the next thing anyone knows, the election's a done deal, with turnout effects all the way down the ticket.

But is charisma a good thing? Not according to Jessica Flanigan, a philosopher at the Jepson School at the University of Richmond. In a thoughtful 2013 paper titled "Charisma and Moral Reasoning," she argues that the quality that is so regularly praised "is intrinsically problematic from a moral perspective."

How can this be, when people get so excited about charismatic leadership? For Flanigan, the excitement itself turns out to be a problem. When people get excited about a leader, they tend to defer to that leader's decisions — in effect, to indulge a presumption that the leader will find the right answer. They do less reasoning on their own. "The problem with charisma," she writes, "is either that it inspires followers to act rightly but for the wrong reasons, or worse, that it inspires people to act wrongly for the wrong reasons."

Flanigan supports her arguments with extensive attention to social science. To take just one example, she cites a troubling 2009 study in which subjects were randomly assigned to different groups that were then asked to work cooperatively to solve mathematics problems. The researchers found that the groups did not select as their leaders the members with the greatest mathematical ability; instead they selected for confidence and dominance of personality.

Maybe you're less troubled than Flanigan about the prospect that people might do the right thing because the charismatic leader says so rather than because they've figured it out for themselves. But if you believe that a self-governing polity ought to reason and deliberate, then she has a point.

In any case, we should all be worried about the other possibility: that because the charismatic leader says so, supporters will think the wrong thing is right. If you doubt that people behave this way, ask yourself why product marketers and political candidates alike so assiduously seek out celebrity endorsers.

Another charisma skeptic is the psychologist Tomas Chamorro-Premuzic. Writing in 2012 in the Harvard Business Review, he makes a case similar to Flanigan's, but with a particular point in mind: "There are only three ways to influence others: force, reason, or charm. Whereas force and reason are rational (even when we are ‘forced' to do something, we obey for a good reason) charm is not." When we are charmed by a charismatic leader, we may follow without reasons. The charm, rather than the mind or the morals, becomes the reason for the leader's success.

Moreover, Chamorro-Premuzic warns, charisma can be addictive. For that reason, leaders who have risen through force of personality rather than skill will often "remain deluded even after their followers have woken up." That's one reason that some who rise high in companies continue to swagger even as their performance falls; and also why so many popular revolutions transform into dictatorships.

Chamorro-Premuzic also offers a partial solution, at least with regard to election season: "Limit politicians' media exposure and airtime; it is distracting and makes charismatic candidates look more competent than they actually are." (Not as a matter of law, he hastens to add, but as a matter of curation by news editors.)

The critics, it seems to me, score important points. True, charisma might be seen as essential to modern governance, because one must after all get things done. But risks abound. Surely recent political history should remind us that the ability to whip a crowd into a frenzy doesn't promise a morally appealing presidency. One could even conclude, with Flanigan and Chamorro-Premuzic, that too much charisma might count a disqualification.

None of this should be taken as a comment on Beto himself. Like his competitors, he will doubtless prove to have gifts beyond the charisma that the commentators adore. I have no idea who will emerge from the crowded Democratic presidential field, or how the next election will turn out. But whoever prevails in 2020, I hope what motivates the voters will be the candidate's ability to reason and persuade — not the candidate's charisma.