Trump loyalty test is hurdle for Huntsman at State 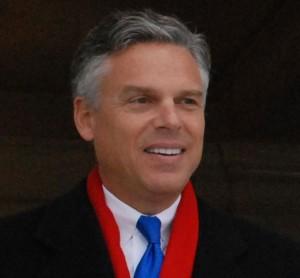 On the surface, Jon Huntsman appears to be a safe pick to be President Donald Trump's deputy secretary of state. He is a popular former governor from Utah whom Barack Obama named the ambassador to China. In an era of hyper-partisanship, Huntsman has cultivated a reputation as a centrist and enjoys bipartisan support. So it makes sense, as the Wall Street Journal reported, that Huntsman is being considered for the job by Secretary of State Rex Tillerson.

At least it makes sense at first. But Huntsman may not pass the Trump loyalty test. After tapes emerged in October that caught Trump on tape boasting of groping women, Huntsman called on him to drop out of the race. That's important considering the fate of Elliott Abrams, a former Reagan and Bush administration official who had passed his final interview with Tillerson, only to be vetoed by Trump. Abrams had criticized Trump during the campaign.

Then there is the issue of his family's business, the Huntsman Corporation, a chemical manufacturer that does business all over the world. Trump campaigned on the promise to bring back jobs from overseas. He has proposed a 35 percent tariff on American companies that move jobs abroad. Huntsman's family business has moved many jobs to places like India and China.

Over 1,000 of its 12,000 employees in 2011 were in China, according to Bloomberg Businessweek. That's another potential area where Huntsman and Trump will clash. The president has been a persistent foe of China, and has accused the country of stealing U.S. jobs and manipulating its currency at the expense of other nations. Huntsman has a long history of trying to enhance ties with Beijing and supporting permanent normal trade relations with China.

If Huntsman were nominated to be deputy secretary of state, he would have to unravel his ties to his family's business. After his failed presidential run in 2012, Huntsman rejoined the board of the Huntsman Corporation. He resigned from it in August 2015, but his father, Jon Huntsman Sr., remains the executive chairman of the board, and his brother Peter is the CEO. The Huntsman family still owns a 20 percent stake in the company and as of February 2015, Jon Huntsman Jr. still owned stock in it.

In an Aug. 6, 2015, letter to the board of directors, Huntsman wrote that he would still be working with the company. "I feel we have constructed, for your consideration, an ongoing relationship that would maximize my personal involvement and most importantly benefit the shareholders and associates of Huntsman Corporation," he wrote. "A requirement of achieving this would be resigning as a member of the board of directors, which I hereby tender." Under the Trump administration's ethics rules, Huntsman would at the very least have to recuse himself from any official business that touched the Huntsman Corporation for two years following his resignation from the board. But his resignation letter suggests he has maintained a relationship since then, in which case further recusals might be required.

Norm Eisen, who served as Obama's special counsel for ethics and government reform, told me he believes Huntsman would be an "outstanding person" to fill the role as deputy secretary of state. Nonetheless, he said Huntsman will need to make a clean break from his family's business.

"He is going to need to make the same kind of clean break that Mr. Tillerson made and that Donald Trump has refused to do," said Eisen, who is now a fellow at the Brookings Institution. "This means three things: sell, recuse or get a waiver. I don't think that waiver is probably in the cards here. He will either have to do recusals, sales or a combination of both."

Given the fact that other Trump appointments have similar conflicts, that's not likely going to derail his nomination. It remains to be seen though whether Trump is willing to let one of his former critics and a proponent of the U.S.-China trade relationship into such a prominent job in the administration.