The Limits of Appeals to 'Cancel Culture' 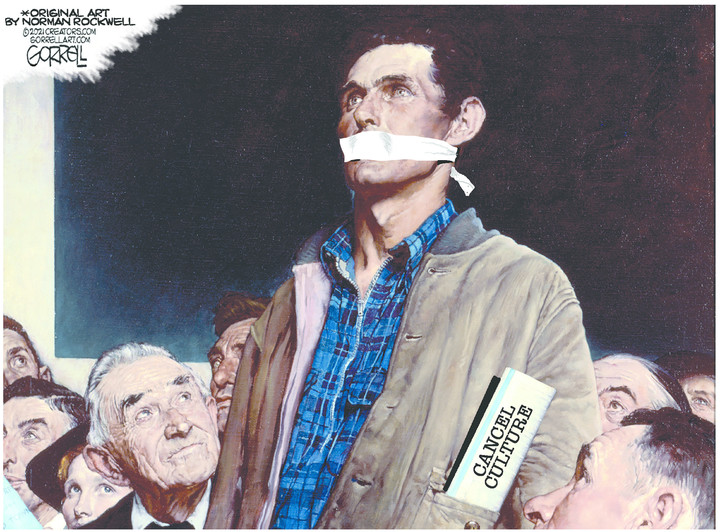 The metastasis of the woke ideology, which seeps through our moribund body politic like a cancer, has shocked the conscience of many who still cling to the idea of America as a liberal bastion. One of the woke ideology's more prevalent symptoms, the phenomenon known as "cancel culture," has perhaps been disproportionately effective in radicalizing many centrists and moderate liberals against the woke-besotted militant Left. For definitional purposes, we can think of cancel culture as referring to the trend of seeking to "cancel" someone — to ostracize and remove him/her from social media, other media and the public square more broadly — for offending the ever-shifting sensibilities of a self-anointed thought police clerisy.

The default right-of-center response to the rise of woke-inspired cancel culture has been to oppose it, tout court, in the name of "free speech." Such a posture is certainly preferable to the diametrical opposite approach, but it mistakes the Right's proper response at this current fraught juncture in our politics. Three recent examples, all from the last month, elucidate and help to point toward the path forward.

But Gonzalez's tweets cannot be read in isolation; sophomoric though it may be, attacking the physiognomy of any and all tweeters is a non-negligible component of Gonzalez's Twitter repertoire. Murray's attempted hatchet job was much-ridiculed, and the brutal irony of Weiss — a would-be martyr for anti-cancel culture liberalism, as seen in her July 2020 New York Times resignation letter — platforming Murray in an attempt to cancel Gonzalez did not escape notice.

Next, on Jan. 26, Ilya Shapiro, formerly of the libertarian Cato Institute and now-incoming executive director of Georgetown University Law Center's Center for the Constitution, issued an uncontroversial tweet that has attracted orders of magnitude more attention than it deserved.

There is nothing controversial about Shapiro's since-deleted and since-apologized-for tweet. Everyone reading the tweet in its entirety, with no single clause in isolation and with even a modicum of charity, knew exactly what Shapiro meant. Recent polling has also confirmed that Americans overwhelmingly oppose Biden's doubling down on his myopic 2020 campaign-era vow to cabin his first Supreme Court search to such a narrow intersectional sliver of the American populace.

Nonetheless, capitulating to a frothing mob of ginned up, faux blue-check outrage and the pampered babies who apparently comprise Georgetown Law's student body, the law school's cowardly dean, William Treanor, threw Shapiro under the bus and placed him on paid administrative leave posthaste.

Finally, on Jan. 31, Whoopi Goldberg (n.b.: a fake last name) made much-criticized comments on ABC's "The View" that are historically inaccurate at best and antisemitic at worst. Goldberg claimed that the Holocaust was "not about race" and merely amounted to one group of white people (Germans) annihilating a different group of white people (Jews). Goldberg is, of course, wildly off the mark: Adolf Hitler's entire genocide against European Jewry was predicated upon the alleged superiority of the "Aryan race."

Goldberg quickly received a de rigueur slap on the wrist; ABC News suspended her for two weeks. And just as sure as night following day, the Right's anti-cancel culture paragons of liberalism, such as Dispatch Senior Editor David French, lamented the suspension.

The reality is that the paradigm of cancel culture — much like any paradigm of liberalism, such as free speech and freedom of religion — has obvious limitations. Just as free speech does not condone shouting "Fire!" in a crowded theater and freedom of religion does not condone child sacrifice, so too are there certain things that should be canceled.

Resources are scarce, as the foundational lesson of economics teaches us, and there are only so many battles that anyone can, or should, choose to fight at any one time. Furthermore, when even Weiss and Murray attempt to (wrongly, as the specific case may be) cancel someone, it should be clear that no one can, or should, blindly defend everything out there by appealing to cancel culture. Put another way, an absolutist approach to opposing cancel culture here, there and everywhere is an untenable position.

The Right's own approach to the cancel culture wars should thus be dictated less by high-minded "principle" or dogma and more by prudence, good ol'-fashioned common sense and the imperative to bolster friends and punish enemies within the confines of the rule of law.

As Claremont Institute President Ryan P. Williams aptly tweeted: "Those arguing 'don't cancel Whoopi OR (Joe) Rogan OR Ilya Shapiro' have not learned from the last 5 years and fail to see the stakes of the great Awokening. At the very least, just don't comment on Whoopi — she's a dishonest ignoramus, after all, who is on the side of woke revolution." Indeed.

Appeals to opposing cancel culture only get us so far — and not very far at all, as the case may be. As the idea of a values-neutral liberal order further implodes on a daily basis, the time is ripe for the Right to ditch the proceduralist rhetoric of cancel culture, start arguing substance and start playing tit for tat as our political enemies so brazenly do.

Just look at that paragon of pusillanimity, Dean Treanor.