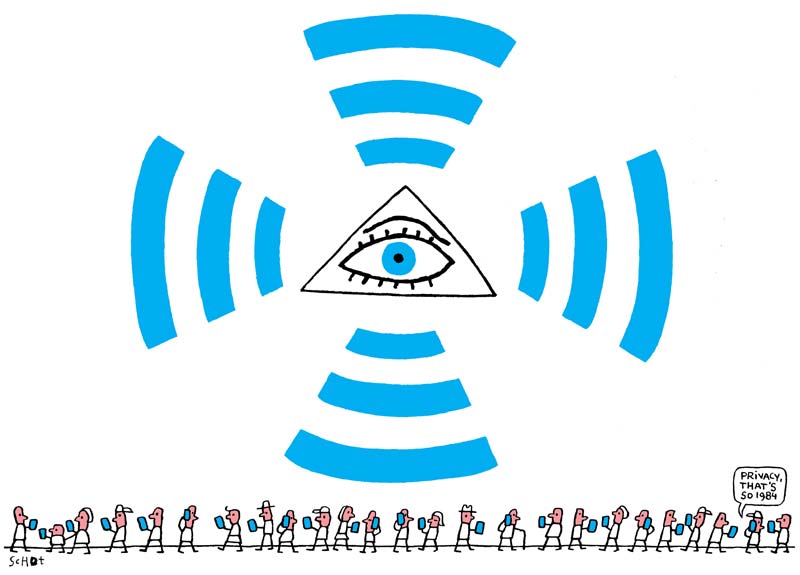 I love my digital devices, but people keep telling me to worry more about my privacy.

"Encrypt your emails!" "Drop Google and use search engines like DuckDuckGo that don't track us!"

I probably should. But I don't. I'm lazy, and I like that web companies know me and show me things I'm interested in. I like that they display "restaurants near me."

"You do not understand the way that that system is being used against you," says whistleblower Edward Snowden. Snowden is in exile in Russia because he revealed how the NSA spied on us and lied about it. He says I should care more about what companies like Google and Facebook know. But why?

"I figure that teenage boy across the street could be picking up stuff I send," I say. "The cork's out of the bottle! What difference does it make (if media companies have it)?"

Snowden replies, "They're trying to shape... what you believe."

I don't feel very threatened. Amazon and Facebook want my money, and to get my money in a free market, a company must give me what I want. That's a good thing.

"When we talk about the free market," says Snowden, "We presume... open competition... I don't believe this."

He may be right. Perhaps big internet companies are now monopolies, so dominant that we can't leave them if we don't like what they do. But the "experts" also called IBM, AOL and Myspace monopolies, "immune to competition." Whoops.

"Facebook ran their own psychological studies on the current population to see if they could make you angry," says Snowden. They succeeded!

The companies also promise to protect our privacy. They say they don't just give information to the government. But they do. Our government routinely forces them to turn it over.

"Why is it so much worse that our government has it?" I ask Snowden.

"Google can sell you a different pair of shoes on the basis of what it knows about you... but they can't put you in jail," he replies. "They can't bomb you. The government can."

It is creepy that former Google Chairman Eric Schmidt said, "If you have something that you don't want anyone to know, maybe you shouldn't be doing it in the first place."

Snowden points out that this suggests "that we should have to constrain our intellectual curiosity... because we could someday be judged on it...(But) who decides what is normal, what's acceptable...?! In a free society, we are allowed to be different."

"Your phone tries to reach this other person, wherever they are in the world. It has to go through the Starbucks that you're sitting at, through an internet service provider, through a data center. At any one of these points, anybody sitting on that line can snatch a copy of the conversation."

WhatsApp won customers by offering encryption that prevents that. "An encrypted message cannot be unlocked without a mathematical key," explains Snowden. "That defeats mass surveillance."

That makes it harder for government, and companies, to learn so much about us.

"Everywhere you go, everything you do, everyone you interact with and everything you are interested in is being collected and recorded and analyzed and assessed. We don't know how that is being applied yet, but we do know once they have this information, we can't take it back from them."