GameStop's Reddit Raiders: Goliath Beaten by David, Then They Change the Rules 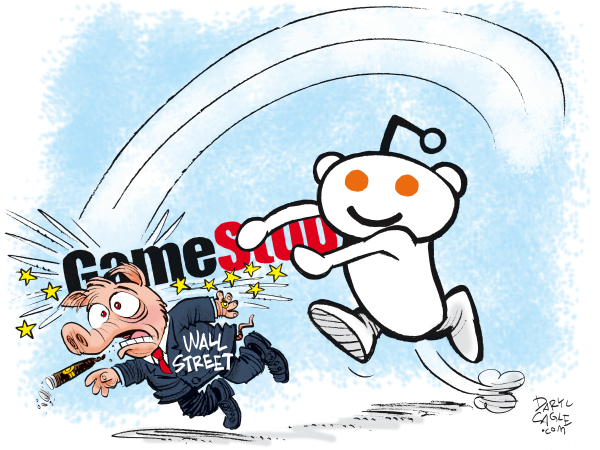 Because I started on Wall Street with Goldman Sachs in the 1980s, folks have asked me to explain the GameStop story. So here goes.

Hedge funds are the showy, big money types. If a Salvation Army band is playing outside their building, they ostentatiously raise money for the band to have a string section. They make inordinate money.

Since most are based in New York and Connecticut, they essentially buy cover from Democrat lawmakers up there. They are the bullies of Wall Street, often crowding into the same trade to ruin a company like GameStop, which sells video games at malls. GameStop is the Radio Shack of retail and is admittedly a good stock to "short," but here is where greed got the bullies.

Most markets in thin stocks are 1,000 shares bid for, 1,000 shares offered. When big orders come in on such stocks, they can move the stock -- a lot, 68% in one day as in GameStop's case. We used to say at Goldman Sachs about the market-making stock trading desk, "What is the difference between a hooker and a stock trader? The hooker will not change her price when she sees your size."

Enter the Reddit Raiders, a group of "normal guys" who exchange ideas online. They trade on Robinhood, ProNvest and other small online sites. They decided, with more than 100% of GameStop stock being sold short (how is that even legal?), they'd make it hard for the hedge funds to buy back their short positions by running up the stock price. The Davids caught the Goliaths with their shorts down.

GameStop's stock symbol is GME, but it became WTF? It was trading at $18 on January 1. When the stock price soared as high as $483 a share, Reddit Raiders noticed the inordinate short position and started buying it.

The hedge funds who have sold short are forced to buy back the stock at higher prices. All legal. But when "average" Americans started making money, hedge funds cried to their bought-and-paid-for elected officials and regulators. They stopped buy orders in GameStop, allowing the price to drop and bailing hedge funds out -- to the detriment of the Reddit Raiders. Normal investors had figured that they could beat hedge funds at their own gameâ€¦ and they did, until the regulators and tech oligarchs stepped in.

What happened next was also interesting. Another social media platform server banned the group, just like Amazon de-platformed Parler. The "justification," as it always is, was that users engaged in hate speech and spread misinformation. These are the same bogus reasons Twitter and Facebook ban conservative writers.

Many do not know how Wall Street works. Many think it's just like playing the lottery for guys who wear khakis. But it is an overly regulated game, usually won by those who pay the most to politicians to protect them and keep competition away. Every regulation makes it harder for smaller firms to compete and further entrenches the "too big to fail" firms with their co-conspirators in government who protect them. In this case, they did it again.


The stock market is a dangerous place. Even Kim Kardashian could lose her ass. But when the little guy figures it out and wins, regulators should not step in and protect the big boys. This tells you what government thinks of us.

In fact, Janet Yellen, Federal Reserve Chair under Obama and the new Treasury Secretary, earned more than $800,000 in speaking fees from some of these same hedge funds. And she "regulates" them? We know Dems are against free speech, but charging $800k for it?

Where are the Keystone Kops at the SEC? They are going after small investors here. Just to show how corrupt the Deep State is, Biden appointed the wife of disgraced FBI Russia collusion manufacturer Peter Strzok to run the SEC. Remember Strzok's text calling us "smelly WalMart shoppers"? Biden just paid him back for trying to take down Trump. It's how Washington works.

I do not worry about the stock market. I have all my money tied up in those machines that rewind videotape cassette movies. But even rebel billionaire Elon Musk is showing concern. I hear he is thinking of taking everything he owns and slowly moving it to another planet.

Biden noticed these uppity, average American day traders making money, and he has sent John Kerry from the Keystone XL Pipeline speech to tell them they cannot make money that way. They should learn to make solar panels instead.