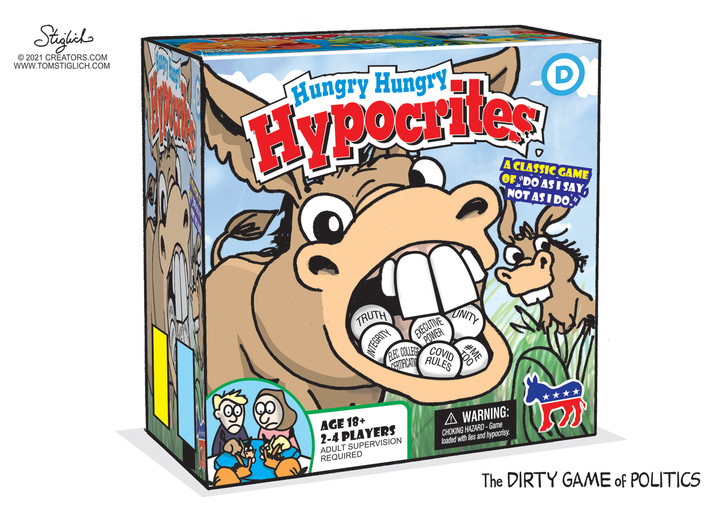 If Democrat hypocrisy were an energy source, Americans could leave the lights on around the clock and never see a bill.

Democrats are roasting Republican senators Ted Cruz of Texas and Josh Hawley of Missouri for objecting to the Electoral College votes of Arizona and Pennsylvania due to serious questions about ballot-box irregularities. Democrats have reported these two lawmakers to the Senate Ethics Committee for their January 6 legislative intervention, which, unfortunately, coincided with the U.S. Capitol riot.

There are two massive problems with the Left's jihad against these Republicans:

First, these GOP lawmakers' actions were perfectly legal. Article II, Section I, Clause 3 of the U.S. Constitution and the Electoral Count Act of 1887, 3 U.S. Code Â§ 15, both governed their objections to states' electors.

Second, Democrats repeatedly have resisted electors, starting four years ago. When Democrats do this, it epitomizes public service. When Republicans do this, it's Kristallnacht. Indeed, President Joe "Unity" Biden compared Cruz and Hawley to Nazi Minister of Propaganda and Public Enlightenment Dr. Joseph Goebbels.

"I have an objection because 10 of the 29 electoral votes cast by Florida were cast by electors not lawfully certified because they violated Florida's prohibition against dual office holding," Raskin complained.

Democrats understandably balked at electors from Michigan and Wisconsin, which Trump won by 0.3 percent and 1.0 percent, respectively. Whatever these Democrats believed went wrong could have been decisive. However, Democrats also opposed electors from Alabama (where Trump outran Hillary by 28.3 percent), West Virginia (42.2 percent), and Wyoming (47.6 percent). This was recreational obstructionism.

But on January 6, 2005, Democrats were back at it. Representative Stephanie Tubbs Jones of Ohio objected to George W. Bush's Electoral College votes from her state. Senator Barbara Boxer of California concurred. As on January 6, 2021, the House and Senate parted to debate this challenge separately.

Representative Nancy Pelosi (D — California) praised the 31 Democrat objectors for "speaking up for their aggrieved constituents" during "their only opportunity to have this debate while the country is listening."

"The fight for electoral justice," Senator Boxer argued, was "worth a couple of hours to shine some light on these issues."

"Mr. Vice President, I rise to object to the fraudulent 25 Florida electorial [sic] votes," said Representative Maxine Waters (D — California). "The objection is in writing, and I do not care that it is not signed by a Member of the Senate."

Unlike today's unfairly excoriated Republicans, Democrats faced zero repercussions when they exercised over and over again their constitutionally protected and statutorily permitted power to object to Electoral College votes. Democrats should abandon their congenital hypocrisy and recognize their Republican colleagues' right to behave like Democrats.