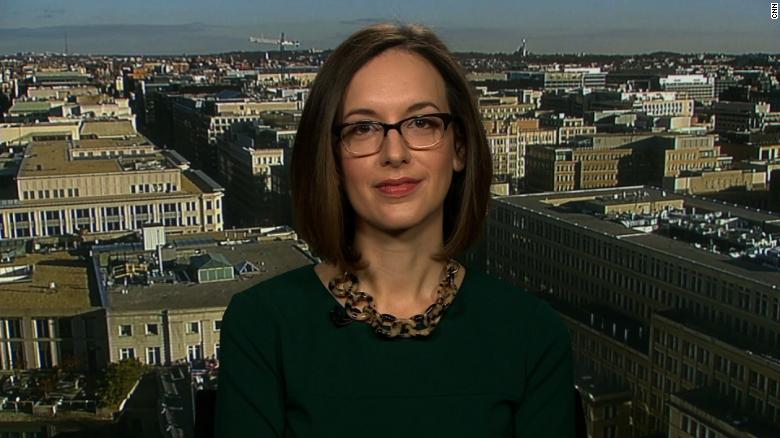 CNN, long vilified by President Donald Trump as "fake news," has plucked an operative from within Trump's own party to be one of its political editors.

Sarah Isgur, a longtime Republican spokesperson, will join the network to help direct its political coverage, including the Democratic primaries and Trump's reelection campaign, the network confirmed on Tuesday.

The hiring, first reported by Politico, is unusual for a number of reasons. Isgur hasn't worked in journalism, and has no experience managing a TV news operation. She has spent the bulk of her career as a Republican advocate, working in behalf of such candidates as Mitt Romney, Ted Cruz and Carly Fiorina and the Republican National Committee.

Most recently she was the spokeswoman for the Justice Department, under Attorney General Jeff Sessions, whom Trump forced out in November.

In her role as a Republican advocate, Isgur has disparaged CNN before, once calling it "the Clinton News Network," a reference to its alleged bias in favor of Bill and Hillary Clinton. She also has a history of tweeting comments critical of reporters and in support of conservative causes and positions.

It's not unusual for people who've worked for political campaigns and politicians to become commentators and hosts - MSNBC's Chris Matthews, Joe Scarborough, Nicolle Wallace and Lawrence O'Donnell, Fox News' Dana Perino, ABC's George Stephanopoulos and Diane Sawyer, and the late NBC moderator Tim Russert all did so. But it's rare for them to help direct news coverage behind the scenes, as Isgur will.

At CNN, she will be one of several editors involved in political coverage on air and online, reporting to political director David Chalian, people at the network said. She will also occasionally offer analysis on air.

"She will make sure the pieces are getting on the right shows," said one person, speaking on background because Isgur's hiring hasn't been officially announced. She'll "make sure a digital story is posted at the right time."

Several people at CNN expressed surprised at Isgur's hiring, given her overtly partisan past. The reaction, however, seemed far more muted than when the network signed up former Trump campaign manager Corey Lewandowski to a commentator role.

Trump initially resisted Isgur's appointment to his administration in 2017, given that she had criticized his campaign when she was Fiorina's deputy campaign manager. "Saying you will criminally prosecute your political opponent when you win is a scary and dangerous threat," she tweeted in October of 2016 after Trump repeatedly threatened to imprison Hillary Clinton if he was elected.

Isgur won the job as Sessions' spokeswoman after pledging her loyalty to Trump in an Oval Office meeting.

Several people at CNN said Isgur has dealt with the news media for years and is highly knowledgeable about national campaigns and strategy.

Although Sessions and Romney, in particular, have been at odds with Trump in the past, Isgur's hiring could offer some "bulletproofing" against Trump's repeated claim that CNN is biased against him. Trump has repeatedly called the network "the enemy of the American people" and briefly barred its chief White House correspondent, Jim Acosta, from reporting at the White House before a court restored Acosta's access.