Why Alexandria Ocasio-Cortez deserves our gratitude 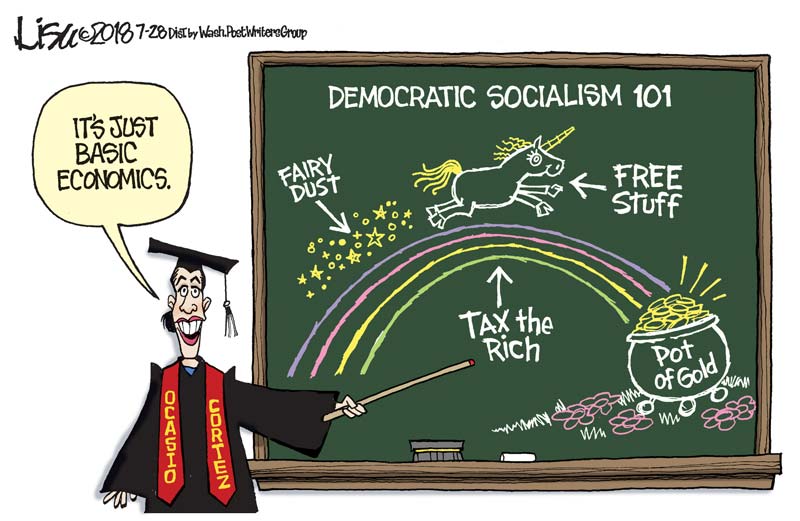 Alexandria Ocasio-Cortez is alive and kicking, and when I say kicking I mean kicking anything and everything that might get in the way of her political desires. That would include common sense, reading well, understanding issues, maintaining a workable economy and preserving a stable America.

This 29-year-old Democratic House representative from New York is already a star, you know, because, she is the youngest woman ever elected to Congress and beat a biggie in the primary.

She says what she thinks, although thinking is not her strong suit. She is sincere, although sincerity by itself can be worrisome. I myself like her, her enthusiasm and energy and her bold confidence that, if she can just get radical enough, she can dramatically change America.

The change might be horrific, however, and liking someone is not the same as applauding. In some ways, she is akin to President Donald Trump, a Twitter addict, sufficiently ignorant to let absurdities get a tight hold on her and gifted with a personality that says to at least some that here's a soul who can and will get things done, important things.

Unlike Trump, she is more than a little socialistic and not yet president, even though 74 percent of Democrats said in a recent poll they would consider her. Because of a Constitution that insists you must first be 35, her chance won't come until the 2024 election.

The good news for her and others is that the world should still be here by then. In a recent speech Cortez said the trajectory right now is for climate change to end the world in 12 years minus solutions. People thought, oh well, she is indulging in hyperbole to make a point, but no, she said, she was serious, and she said she read as much in the Guardian newspaper. Well, the paper did report on an important study that does say something scary if questionable, that we could then experience dreadful hurt that could stick with us. But the end? Nope.

Cortez does not seem to read carefully, and she is more than a little amiss on the whole climate change issue. She wants this country running entirely on renewable fuels by 2035, which would cost trillions upon trillions even if renewables and maybe some donkey treadmills were up to the task by then. Even applying other more workable solutions, while counting for something, would still not solve the feared crisis because of other nations continuing their CO2 ways.

Even so, she says she has a way to pay for it all and that's a 70 percent marginal tax rate on people making $10 million or more a year, and, yes, even after avoidance techniques galore and other issues there could be a revenue gain. It wouldn't come close, however, to what is needed, and then consider her method of paying for another progressive scheme, Medicare for all.

She once again misread a published article, this one in Nation magazine, that said the Pentagon bureaucracy was so confused that it could not account for how $21 trillion was spent over 18 years. Cortez erroneously thought this meant there was something like a treasure box somewhere with all that dough in it. Even if there were, it would not take care of a program that could cost $32 trillion over a decade, according to a study of the Bernie Sanders plan.

What you would have to do to finance that is double the taxes of all individuals and corporations, the study says. Meanwhile we have an incredible, endangering debt and Cortez wants government jobs and housing for one and all and a bunch of other stuff. It exceeds some of what progressives generally want, something costing $42.5 trillion over the next decade with $44 trillion in revenues.

I am not suggesting the end of the world, just gratitude to Cortez for giving us an unintended warning about progressives.