A Total Failure of the State 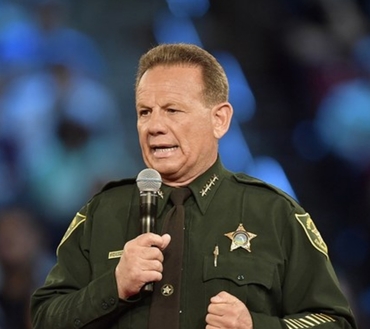 The guy they should have been booing.

During Wednesday's horrible fiasco of a "Town Hall", Broward County Sheriff Scott Israel spelled it out:

What I'm asking the law makers to give police all over this country is more power.

I was sufficiently struck by the above to write it down - because it was clear even then that Sheriff Israel is an incompetent deployer of the power he already has. The scale of his department's appalling failure in the Parkland massacre gets worse almost hourly. I was on air with Tucker Carlson when I heard that Stoneman Douglas High's on-site "school resource officer" - Sheriff's Deputy Scot Peterson, uniformed, trained and armed - had declined to enter the building and had stayed safely outside until Nikolas Cruz had finished killing everybody.

After a day on supension without pay, Deputy Peterson has now "retired", which assuredly comes with pay.

But, as I said, it gets worse. Three of his fellow deputies, from Sheriff Israel's department, then showed up at the school and also decided not to enter the building but to remain crouched behind their vehicles until the shooting had stopped:

When Coral Springs police officers arrived at Marjory Stoneman Douglas High School in Parkland, Florida, on February 14 in the midst of the school shooting crisis, many officers were surprised to find not only that Broward County Sheriff's Deputy Scot Peterson, the armed school resource officer, had not entered the building, but that three other Broward County Sheriff's deputies were also outside the school and had not entered, Coral Springs sources tell CNN. The deputies had their pistols drawn and were behind their vehicles, the sources said, and not one of them had gone into the school.

By my arithmetic, that sounds like at least seven of Sheriff Israel's deputies were at the school, but only two entered the building. Still, it seems to be a crackerjack police department in terms of response time: They're first on the scene - and then they just sit back and watch at a safe distance. Or as Dr Jesse Kelly tweets:

"There's someone breaking into my house. Could you send the Broward County Sheriff's Department to water my garden while I kill the intruder?"

Back when there was known to be merely one of Sheriff Israel's deputies hanging around outside, his predecessor as Broward Sheriff, Al Lamberti, told The Miami Herald:

These events are over in three to five minutes. You don't have the luxury to wait. You might not have the best equipment, you might have small numbers, but you're armed. Those kids are not armed. You have to go in and engage the shooter. Our job is to protect and serve.

Sheriff Israel, on the other hand, sees his job as to self-protect and self-serve, So he showed up at Wednesday's "Town Hall" to showboat and shift blame. And many of the audience fell for it, booing their lungs out at Marco Rubio and the NRA, fell for it: The one local guy on the stage - the one man who could possibly have prevented the slaughter, and certainly (with competent policemen) could have reduced the death toll - skated. Instead, he sneered at the NRA's Dana Loesch for presuming to bring up the dozens of calls to his office about Nikolas Cruz because, unlike him, she's not privy to the inside dope:

You're absolutely not the litmus test for how law enforcement should follow up... We are looking at every single case we got. We are following up on it. We will decide and discern what deputies did, what investigators did, and I will handle it accordingly and people will be punished if they didn't do what they were supposed to do. But that being said, the power of police is not as great as it should be.

There's that pitch again. But we're now getting a look at that inside dope, and it's not good for Sheriff All-I-Need-Is-More-Powers. Relatives and close friends reported to the Sheriff's Department that Cruz "could be a school shooter in the making", but fortunately, after conducting his investigations, Sheriff Israel has determined that in almost all cases there is "no policy violation apparent". These interviews with his officers took place "post MSD incident" - because "incident" is much better bureaucratese than, say, "bloodbath". It will be interesting to learn whether crouching behind one's vehicle until the "incident" is over is yet another one of those things where there is "no policy violation apparent".

Meanwhile, in his first days of retirement, Deputy Peterson had six police officers outside his house guarding him from any intrusive questioning from journalists. That appears to be even more than those crouching outside Stoneman Douglas listening to the "incident" proceeding undisturbed inside.

Still, Sheriff Israel is not without his friends in the media. For example, Chris Cillizza chose to portray the cowering, frozen Deputy Peterson as a stunning refutation of a popular NRA argument:

Is Scot Peterson a "good guy"? Sheriff Israel suspended him without pay for his behavior that day, which would appear to suggest not. The media are insisting that Americans mortgage their security to the state - but hey, when the state lets you down, suddenly its apparatchiks are merely freelance "good guys with guns".

I said on Tucker's show that the state had failed at every level - school district, county, federal. But Sheriff Israel's performance is especially egregious. An honorable man would surely have tendered his resignation. On the other hand, sitting on stage, watching his voters jeer Dana Loesch and call her a "murderer", the sleazy creep can be forgiven for concluding that with constituents this eager to be misdirected why not string along? Their fury should have been aimed at him - and he should have spent his hour on stage ducked behind a podium demonstrating the policy-compliant incident-long Broward County crouch.

As to whether his department failed to take seriously the danger lurking in Nikolas Cruz's online postings, well, cut them a bit of slack: it's very easy to say things which sound in hindsight a little odd. For example:

Lions don't care about the opinions of sheep.

Sounds a bit kooky, maybe? Who said it? Nikolas Cruz to a fellow teenager?

I observed on TV that, given the situation with "refugees" in Germany and Scandinavia and so on, it was more likely that Europeans would rediscover their inclination toward self-defense than that Americans would surrender it. Any foreigners wanting to know why claims to leave it to an all-powerful state don't resonate with half of America need look no further than Scott Israel.