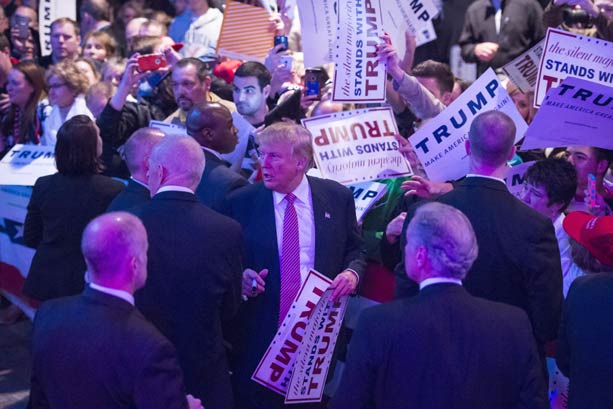 FOUNTAIN INN, S.C. - The town-hall audience listened as Jeb Bush spent the better part of an hour taking shots at Donald Trump --- comparing the Republican front-runner to President Barack Obama, comparing him to Vladimir Putin, calling him a bully, saying he denigrates women and the disabled. When it was over, some in attendance were more terrified than ever.

"I'm going to head right back home and get on my hands and knees and pray that Trump isn't the nominee," Charlene Knight, 73, said, clutching her husband's shoulder. "Oh Lord," she pantomimed, her plume of white hair trembling as she shook her head, "please, anyone but him."

"I'd take Bernie over Trump," her husband, Mike Knight, confessed, staring at his shoes.

Outside the auditorium, Erin Mercer, 35, stopped on the way to her car to tell friends how she really felt about Trump: "He's a misogynist, a bigot, and let's just say in my middle-aged mom set, a lot of my Republican friends even - I think a lot of them would consider voting for Hillary."

It's just days away from the South Carolina primary, and unless all the polling is terribly wrong, Donald Trump, the billionaire political novice and equal-opportunity insult vendor, looks like he's going to win. And in any other election year if a candidate came in second in Iowa, first in New Hampshire and then won South Carolina, he would be the prohibitive favorite to become the nominee.

Maybe because Trump has been leading in the polls here for months (with 36 percent, according to Real Clear Politics' average of the latest surveys), and maybe because other Republican candidates say they will support him if he is the nominee, this doesn't seem so crazy anymore.

But the madness has not been lost on the middle-of-the-road Republicans here, the folks who show up at rallies for Bush, Marco Rubio or John Kasich. Normally proud of the fact that their state picks presidents, as they like to say, this is now a group filled with existential dread.

"People in Iowa learned this, and then the people of New Hampshire," said Joel Sawyer, an unaffiliated GOP consultant in Columbia. "And now South Carolina is having its own 'holy crap' moment."

"For 50 years I've voted as a Republican, and I think this might be the first time I don't vote," said Len Rock, 68, after a raucous Rubio rally last week inside a Greenville airline hangar. "I really think there's a high likelihood that Trump is the nominee."

Amanda McCombs is only 30, but she said the same thing: If Trump tops the ticket, it will be the first time she doesn't vote Republican. Most likely, she won't vote at all.

"The choice between him and Hillary Clinton would be like the choice of being shot or poisoned. Either way we're all dead."

"I think Hillary is more like being shot," her husband, Arron McCombs, interjected. "You know exactly how that would go, and it would happen quickly; you just don't know what to expect with Trump."

Sen. Tim Scott, R-S.C., who introduced Rubio at the airport rally, tried to project confidence about his candidate in a conversation with a reporter but quickly resorted to sports metaphors: Miracle comebacks, Hail Mary passes, only-in-the-first-quarter. ...

"The game change will happen," Scott said. "This is the place where we pick presidents. We do, we pick Republican nominees. We're going to do it again. ... I hope in 2016."

Trump's campaign headquarters in downtown Greenville is replete with bunting, a TV playing an endless loop of Trump Facebook videos, and a life-size cardboard cutout of the candidate. Hang out here for an hour, listening to passersby - some headed into Saturday's Republican debate - and there are more signals of the state's angst.

"How is this real life?"

"If I put a sign out front, my apartment would get burned to the ground."

"You want to go in? Come on, it will be hilarious."

"I know waaaay too many people in Greenville to be seen coming out of a Trump headquarters."

Over drinks, aides for other campaigns speak wistfully about a brokered convention - once the pipe dream of journalists and Ron Paul supporters, but now a scenario many are counting on as their last-ditch safety net. State officials wonder aloud what life for them would actually be like if Trump became president.

"The question is, you want to go to the party's execution?" said Chip Felkel, a consultant who worked for the Bush-Cheney 2000 and 2004 campaigns. "I don't think anyone believes he's good for the party."

Of course, that's not entirely true. You don't win states and lead polls without a good chunk of people liking what you're selling. Hogan Gidley, a veteran GOP operative and South Carolina native who until recently worked on the Mike Huckabee campaign, believes that Trump could be a fine nominee, and that the so-called establishment is just "freaking out" because they have lost control of what's going on.

"Everyone's always worried about the unknown. They don't like what they can't control, and the establishment types are worried because they don't know how to control Trump," he said.

There are strange unwritten rules that Republican candidates and their surrogates have to play by. They can call Trump - a twice-divorced former Democrat who, at the debate, offered praise for both Planned Parenthood and eminent domain- a fake Republican. They can say he's dangerous, or, as Sen. Lindsey Graham, R-S.C., put it after the debate, they can call him a "nutjob."

But they have to stop short of saying they wouldn't vote for him. The closest Graham has come is to say he would "re-evaluate" should it come to that. Voters, of course, don't have to waffle.

"I'd definitely vote for Hillary over Trump," said Scott McNally, a 26-year-old schoolteacher who lives in Greenville and supports Ohio Gov. John Kasich. "I'd never have to worry about Hillary embarrassing me as an American."

It was the afternoon of Saturday's debate, and a crowd of several hundred gathered outside a barbecue joint a couple towns over to listen to Kasich do his nice-guy routine. He called a couple of kids to the stage and made them promise not to do drugs. Standing beside former Clemson University quarterback Tajh Boyd, Kasich clutched his chest and proclaimed his heartbreak when the Tigers beat his Ohio State Buckeyes in the 2014 Orange Bowl.

"It's disappointing to see that so much of the party has moved away from this," said Jay Sinnett, a 69-year-old retired engineer with a John Waters mustache. "I'm very worried about what it says to have such an egotist completely void of real substance leading the party."

Shane Smith, a 28-year-old Kasich supporter with a slick leather jacket and aviators, called Trump "laughable, but in a dangerous way." He has a friend who wants to vote for Trump, he said, not because he supports his policies, but because he likes the chaos.

But Smith has a plan.

"I'm going over to his house the morning that voting starts with a couple of bottles of whisky," he said. "He really likes Crown Royal. I know it's sort of like buying a vote, but I'm going to ply him with so much whisky that he doesn't make it out to the polls."