Twitter brought out the worst in Trump — and not just Trump 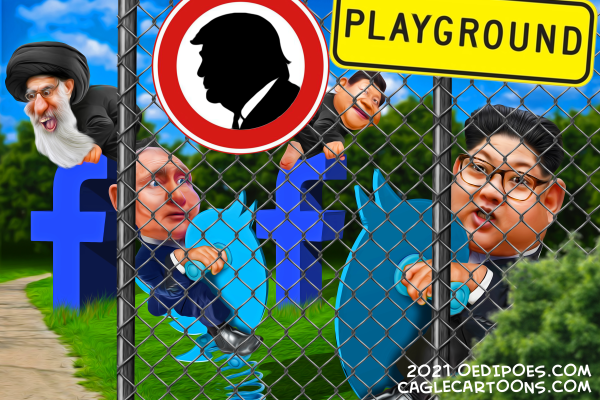 What radio was to Franklin Delano Roosevelt and TV to Ronald Reagan, communicating 280 characters at a time on a social-media platform that is a watchword for hyperactive inanity was to Trump.

It is symbolically appropriate that the effective end of his power after the siege of the US Capitol has coincided with the suspension of his Twitter account.

He may well get impeached a second time, but for now, the punishment that really stings is Twitter CEO Jack Dorsey deciding after sitting down with his woke colleagues that Trump must pay the ultimate price for his post-election misinformation and agitation.

This judgment is as arbitrary as Dorsey's worst critics would expect, and it will be impossible for Twitter to enforce anything resembling a consistent line following its Trump suspension (the platform didn't seem particularly exercised by all the voices valorizing last summer's riots as an Â­ "uprising").

But there is no doubting Dorsey's power. He has rendered the president of the United States practically mute.

Trump remains in the Oval Office and, in theory, commands the biggest megaphone on the planet. He could still make statements, hold news conferences, sit down for interviews or meet with his Cabinet. In his reduced and isolated state, though, none of these options is as appealing as letting his thumbs do his work for him, one outlandish tweet at a time.

Now that this avenue is foreclosed to him, he is less of a presence, even as the political world continues to be obsessed with him (in particular, the manner of his exit from office).

It's not exactly a slow news environment. Yet without Trump's tweets stirring the pot at all times of the day, the nation's political debate feels a little less fevered.

Twitter is Exhibit A for media theorist Marshall McLuhan's axiom that the medium is the message. There is plenty of worthy news coverage and real-time commentary on Twitter. But that isn't where the emotional center of gravity is, as one would expect of a platform built for instantaneous, unfiltered reactions.

It's this aspect of Twitter that perfectly matched the president's proclivities. He found a natural home in an environment that encourages, and often rewards, snap judgments, insults, soon-to-be-forgotten pronouncements, grotesque oversimplifications and the spread of false or dubious information.

Trump wasn't careful about what he said anywhere, but he reserved his most lurid and poisonous communications for Twitter. It was the place easiest for him to, for instance, absurdly accuse "Morning Joe" host Joe Scarborough of murder and insult the looks of his alleged paramour Stormy Daniels.


It was a symptom of his erratic, easily distracted and thoughtless governing style that he used Twitter as a tool of his administration. He warned foreign leaders, fired officials and made pronouncements on legislation on Twitter, often leaving allies and his own government baffled by what was supposed to be the line between "just a tweet" and an official order by the leader of the free world.

Twitter was an especially ready forum for airing conspiracy theories. Asked prior to the election about his giving credence to the lunatic idea that Seal Team 6 had been assassinated, Trump shrugged and said it was only a retweet. In the wake of his election defeat, his Twitter feed became a nonstop source of bad information dredged up from the worst corners of the Internet.

If Trump was the foremost Â­offender, Twitter hasn't done us any favors in this period of our Â­national life. It has fed moral panics and enabled cancellation mobs. It has exposed journalists who once made a pretense of objectivity as rank partisans. It has enticed once-serious people into crowd-pleasing clownishness. It has made politicians dumber and cruder. It has distorted political reality for people across the spectrum.

It, in short, has helped derange our politics, with the former Tweeter -in-Chief leading the way.