Navalny vs. Putin is an epic, and existential, battle 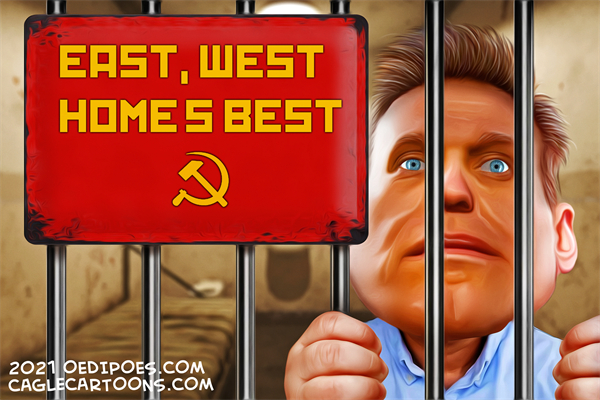 Seen from the outside, developments since Russian opposition leader Alexei Navalny boarded a Moscow-bound plane in Berlin on Jan. 17 resemble the cruelest, crudest form of slapstick.

Navalny supporters gather at the destination airport, Vnukovo. After a failed attempt to keep them out by flooding the airport with fans of a pop singer also flying into Vnukovo, the authorities divert the plane to another airport, Sheremetyevo. (The singer's plane and several others are directed there, too: collateral damage). Meanwhile, Navalny's supporters at Vnukovo are rounded up by riot police.

At Sheremetyevo, Navalny is allowed to get as far as passport control. The dozens of journalists who came on Navalny's flight film his every step. As soon as the opposition politician crosses the Russian border, a group of people in police uniforms demand he come with them but refuse to let his lawyer, who was also on the flight, accompany him because they claim she had not crossed the border into Russia yet. For hours, Navalny is kept in a police cell without being allowed to call anyone, so his whereabouts are not known.

Then suddenly his lawyer is notified that, within minutes, a judge will consider whether Navalny should be arrested in connection with an old case, in which Navalny received a 3 1/2-year suspended sentence in 2014 (a decision deemed "arbitrary and manifestly unreasonable" by the European Court for Human Rights). Navalny is accused of violating his five-year probation, which ran out on Dec. 30, by not appearing when summoned - but he couldn't have responded, since he was undergoing treatment and rehabilitation in Germany after an assassination attempt with military-grade poison that he and western governments attribute to the Kremlin.

If your eyebrows tend to rise with the level of weirdness, they're probably close to the top of your head by now. But that's only if you're an outsider. What's been happening to Navalny has its own highly predictable logic - the logic of a contest of wills between Navalny and Russian President Vladimir Putin. Russians appreciate and respect power plays. Both Navalny and Putin know it. And for both, a lot is at stake.

For years, the Kremlin has sought to diminish Navalny's significance; Putin wouldn't even use his name when asked about him, resorting to euphemisms such as "that person" and, more recently, "the Berlin patient." Yet Kremlin denizens and Putin himself know that Navalny isn't just any anti-corruption blogger. He's the only Russian politician consistently attracting an amount of attention comparable with Putin's, well ahead of personalities such as Prime Minister Mikhail Mishustin or Moscow Mayor Sergei Sobyanin. The unsuccessful poisoning last August propelled interest in Navalny into the stratosphere; attempting to ignore Navalny would be the kind of mistake Putin has avoided throughout his abnormally long tenure.

Putin's response was to try to make Navalny irrelevant by forcing him to emigrate. This tactic worked for the dictator once before: Former oligarch Mikhail Khodorkovsky still funds minor anti-Putin media in Russia, but he's out of political contention; search interest in him barely registers. The Bolshevik revolution of 1917 is the last point in history when Russians were willing to accept a recent emigre as a political leader.

So, as Navalny recovered from the poisoning in Germany, he received a barrage of bad news from Moscow. A new criminal case awaited him there, for allegedly embezzling the funds he's collected for anti-corruption investigations, and he was wanted for supposed probation violations. He knew full well he'd likely be detained as soon as he came back. It would also be impossible for him to rule out further assassination attempts, especially in prison.

Last October, my family enjoyed a brief get-together with Navalny, his wife, Yulia, and their son, Zakhar. Alexey had just relearned to hold a glass without spilling the liquid within it. But even then, I didn't doubt that he would come back to Russia as soon as he felt well enough. Nor did I get a feeling that Yulia was trying to hold him back. Emigration has worked for my family - but the Navalnys were firm that whatever happened, their work and their fight were at home.

The courage they showed had no undertones of martyrdom or self-promotion; rather, it felt like a casual but unbending sense of purpose. It was as matter-of-fact as it was shorn of any false hope. It was the kind of courage of which I don't think I'm capable.

This calm courage in the face of death itself is what Navalny brings to his gladiatorial fight with Putin. The Russian ruler, for his part, brings something else: infinite resources. If a weapon doesn't work, he's got a whole arsenal to try and an army of people who will do his bidding without shame or scruples. Trying to explain the farcical nature of the Russian response to Navalny's return, political commentator Kirill Rogov proposed looking at it from the point of view of these lower-level enablers. "There's less downside to stupidity than to betrayal or failure to go all the way," he wrote on Facebook.

To thwart Navalny, Putin can order criminal prosecutions, mess with air traffic, send judges to police stations - in short, do pretty much anything. The absurd moves against Navalny the world saw in the last few months sent a message to everyone tempted to imitate him that they won't have the book thrown at them; instead, they will face an authoritarian state's full power to bend, grab, maim, poison.

It's a powerful message.


Navalny got it, and decided to ignore it, long ago - but no one in Russia at the moment is equally capable of raising the stakes.

Western news sites and airwaves brim with expressions of support for Navalny from various world leaders, from U.S. President-elect Joe Biden to European Commission President Ursula von der Leyen. But in his epic battle with Putin, Navalny stands alone. In today's Russia, the regime's propaganda routinely uses Western voices to feed support for Putin's policies and paint his foes as "foreign agents." Commenting on Western leaders' demands that Navalny be freed, Foreign Minister Sergey Lavrov said they were trying to "distract attention from the deep crisis of the liberal development model."

Navalny isn't strong because he's supported by Western leaders; his strength comes from being able to jettison the round-the-clock protection he got in Berlin courtesy of the German government - and fly completely defenseless to Russia, where he'd just barely survived an assassination attempt. There, the world can do nothing for him, if only because of Putin's endless arsenal of dirty tricks. There, he stands only because he won't kneel.

I don't know if this is how Putin finally gets beaten. But Navalny's public challenge is the most powerful the dictator has ever faced, and whatever happens to the former "Berlin patient," I'm proud to know him; he's a hero to my kids, too.