After the anti-Trump party couldn't figure out the language, kept up the tall tales and then dug up another slipshod accusation 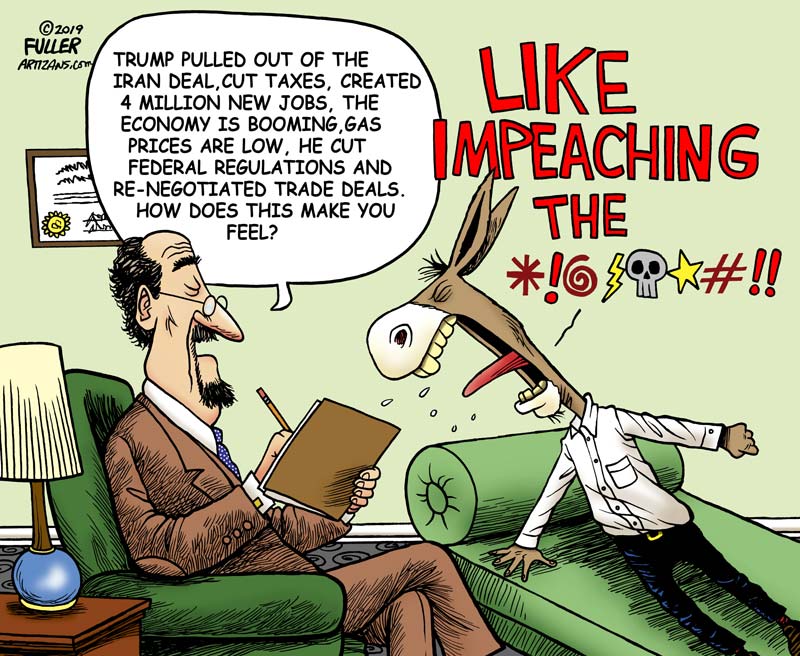 In the thousands of books certain to be written about President Donald Trump, the first chapters will almost surely begin with the climax, his last days in office, his refusal to concede electoral defeat and a rally that led to a riot, a Washington, D.C., horror show. It was an attack on the Capitol in which four people died, including a supporter shot by police. To watch the confusion on TV was to be emotionally pulverized.

The event, after all, reached beyond itself, as if it were a dramatization of America's collapse. Rule of law? No. Attempted rule of anger? Yes. Institutions doing their job without interruption? No. Wild-eyed miscreants interfering? Yes. Breaking into the Capitol the way these people did, fighting with police, ransacking the offices of representatives and senators, is felonious and can lead to 20 years in prison. So be it. Something more than 52 were arrested and, if later convicted, let them pay.

Trump called for the rioters to calm down and go home, but, at a preceding rally, he said the presidential election was stolen, that he would never concede, that these people had been cheated, that they should go to the Capitol and be strong.

Some Republicans there were engaged in a futile effort to debate the confirmation of electoral votes making Joe Biden president even as Vice President Mike Pence, in charge of proceedings, thought this was out of place, and Senate Majority Leader Mitch McConnell condemned the obstruction.

All of this comes on top of Trump's frequently inane tweets, his multitudes of false statements, his absurd actions, his narcissistic vengefulness, pettiness and obvious ignorance, but the story hardly ends with him. Our republic's essential principles have been viciously under attack by ultra-progressives wanting a world so different from what we have that Democrats in the House recently voted to outlaw use of such words as "mother," "father," "sister" and "brother" in House rules so as to be gender neutral, or maybe to signal insanity.

Call that trivial, if you like, but the assault on Trump after his 2016 election was unexampled with lies to Congress, leaking of classified information, the use of phony dirt apparently from Russia and a Russia-collusion investigation to get him impeached. The whole thing was pretty much a farce, and even after two years of probing and millions spent to make a case of coordination between the Trump campaign and Russians to commit a serious election crime, there was insufficient evidence. The report said as much but the anti-Trump party couldn't figure out the language, kept up the tall tale and then dug up another slipshod accusation.

Trump, unfit for office, almost made the case that such should be the chief criterion for election. His administration wiped out ISIS, put together a workable peace program for the Mideast, helped boost the median income with a tax cut and deregulation, fostered an energy boom, successfully pushed for federal prison reform, significantly improved health care for veterans, initially saw crime go down from Barack Obama's last two years in office and fashioned policies facilitating the production of vaccines to exterminate COVID-19. Trump did lack his predecessor's brilliance and charm, but also his ideological fixations and degree of autocracy.

Now that Trump has also helped Democrats win two Georgia Senate races to take slim control of the Senate, he has opened doors for making the next administration one that could undo the best he has done as socialism gains oomph, fossil-fuel abandonment is plotted and the Supreme Court is made a political plaything. Trump's worst policies, opposition to free trade and debt enthusiasm, were actually borrowed from the Democrats. He himself will lose his following, face the prospect of prison for past business dealings and has already been told by Scotland that he can't go over there during Biden's inauguration as president.

The big question, of course, is whether our democratic republic can sustain itself in the face of what Trump, the left, serious class division and cultural change have wrought, and I think the answer is yes, in the long run we can, but that we should hardly shrug our shoulders at citizens storming the Capitol as if it were the Bastille.