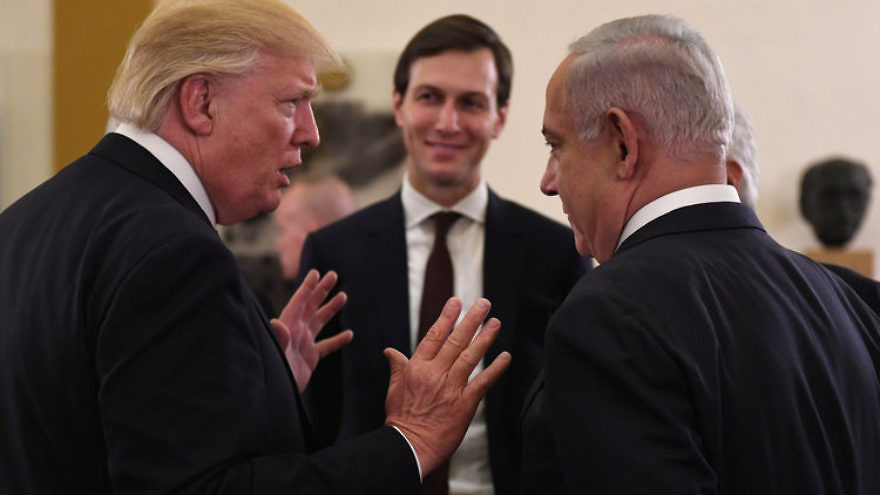 Three years in the making and long after most of the world had given up on it being rolled out, President Donald Trump's Middle East peace plan may soon see the light of day. In an interview with Axios, National Security Advisor Robert O'Brien let drop that the administration's blueprint for negotiations between Israel and the Palestinians may soon be unveiled.

That the effort that was the responsibility of senior presidential adviser/son-in-law Jared Kushner and recently retired Middle East peace envoy Jason Greenblatt hasn't been permanently shelved is news by itself.

But it also raises the possibility that the scheme might be announced during the run-up to Israeli elections on March 2. That ignited speculation about whether Prime Minister Benjamin Netanyahu's right-wing and religious coalition would benefit politically from the move.

It's also highly ironic since the general assumption has been that the plan has been on ice for a year because of the need to wait for the formation of a new Israeli government.

Some 12 months ago, Trump and Kushner seemed prepared to launch the initiative once Netanyahu was safely re-elected for his fourth consecutive term as Israel's leader in April 2019. That was what most Israelis thought had happened on the evening of April 9, when parties pledged to support Netanyahu won 65 out of a possible 120 Knesset seats, signaling that another right-wing/religious coalition would govern Israel over the next four years.

But neither Trump nor Netanyahu had figured on Avigdor Lieberman and his Yisrael Beiteinu Party spoiling their plans. Lieberman said the five Knesset seats in his pocket would only join a coalition that excluded the ultra-Orthodox parties, which have been an essential part of Netanyahu's grip on power during the past decade.


The impasse he created was not one that was capable of being resolved by negotiations between the major parties, even after Israel was forced to hold another election in September. And the same may be true even after a third vote in March.

As the Trump plan sat on the shelf, the two architects of the administration's effort have moved on to other things. And the president's attention is focused on the Democrats' efforts to impeach him, as well as issues like the conflict with Iran and concluding trade deals, not to mention the 2020 elections.

Moreover, it's not as if anyone outside of the White House believed that Trump's so-called "deal of the century" had a prayer of success.

The Palestinian Authority had already made it clear that they would never negotiate on the basis of any plan put forward by the Trump administration. P.A. leader Mahmoud Abbas had repeatedly turned down peace plans and efforts to revive negotiations that were far more generous than the terms he could expect from Trump.

Abbas didn't accept the offer from the Israeli government led by Ehud Olmert in 2008 that had the support of the George W. Bush administration, which called for an independent Palestinian state in almost all of the West Bank, Gaza and a share of Jerusalem. He'd also torpedoed talks championed by the Obama administration in which the United States could have been counted on to place intolerable pressure on Israel to satisfy Palestinian demands. So there was no chance that he would negotiate seriously now with an American government that had finally ended the legal fiction that Jerusalem was not Israel's capital, and which had demanded that the P.A. give up paying subsidies to terrorists and their families.

So why should the Trump administration undertake as futile a gesture as announcing a peace plan that no one wants and can't work?

Regardless of the prospects for success, it's now or never with the Trump plan. With only a year left in what will either be Trump's first or only term in office, the scheme is either going to have to be announced soon or forever be consigned to the dustbin of history.

But there's a better reason than that for Secretary of State Mike Pompeo and O'Brien to publish the plan. Despite the fact that it will not lead to negotiations, it's important that a U.S. government go on record on the issue in a manner consistent with the reality of the Middle East, rather than the fantasies that have been the foundation of all past American efforts.


For decades, the foreign-policy establishment has taken it as a given that the region will be embroiled in conflict unless Israel is made to retreat to the lines of June 1967, and a Palestinian state put in place alongside it. But lately, the Arab world's tacit renunciation of the Palestinian cause in the face of more important threats from Iran and Islamist terror groups show that assumption to be a fallacy.

The same is true for the notion that appeasement of Palestinian territorial demands must be continued, regardless of whether the alleged moderates of Fatah and the Islamists of Hamas are ready to end their century-long war with Zionism and cease working for Israel's destruction.

Whatever you may think of Trump, his foreign policy has recognized that the obstacle to peace has been Palestinian intransigence and not Israeli policies. He has also understood that actions that reinforce Palestinian fantasies about Israel's destruction — like the United States not recognizing Jerusalem as Israel's capital, or former President Barack Obama's desire for more "daylight" between America and Israel — make peace impossible.

A year from now, a new Democratic administration determined to restore Obama's policies may be about to take office. Still, it is important for the current administration to lay down a marker on peace that is rooted in realism, not the kind of magical thinking that actually fueled terror and intransigence in the past.

Trump's ultimate place in history on other issues notwithstanding, it will be to his credit if he can leave his successors a Middle East blueprint that makes far more sense that the ones his predecessors handed down to him.