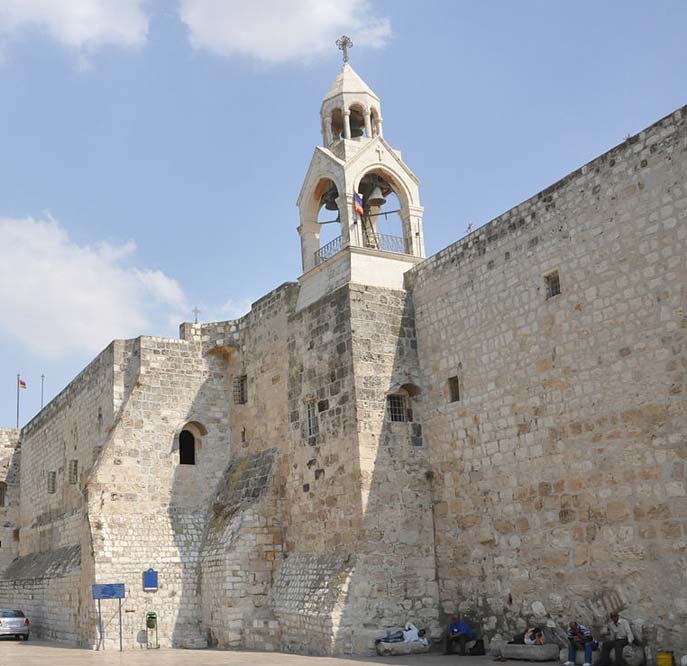 The Church of Nativity in the city of Bethlehem.

There's no escaping controversy any time that Israel or the Palestinians are mentioned. That's a lesson the producers, writers and star of the long-running "Jeopardy!" television game show learned to their detriment this past week when a clue involving the location of the Church of the Nativity was used in an episode that aired on Jan. 10, though it was taped last fall.

In a category titled "Where's That Church?" contestants were asked to identify the location of the house of worship that Christians believe to be the birthplace of Jesus. Katie Needle, a retail supervisor from Brooklyn, N.Y., and the show's defending champion at the time, answered (in the form of a question, as the game's rules require), "What is Palestine?" But to her surprise, longtime host Alex Trebek told her she was wrong. Another contestant named Jack Maguire countered, "What is Israel?" and won $200 for answering correctly.

The show then went to commercial break, and reportedly, after the producers and chief writer Billy Wisse huddled with Trebek, the question about the Church of the Nativity was eliminated. A new one was substituted, and the show went on with Needle ultimately defending her title. But when the show eventually aired, the deleted sequence mentioning Bethlehem was the one that viewers saw in a mistake that the show says it regrets.

It led to an avalanche of criticism against the game show, Trebek and Wisse (who is the son of Ruth Wisse, the distinguished Jewish scholar and eloquent advocate for Zionism) on social media from critics of Israel who saw it as an example of Zionist propaganda that sought to erase Palestine from the map.


Adding to the storm over the segment is the fact that Needle is actually a supporter of the Palestinian cause and has defended the anti-Semitic Rep. Ilhan Omar (D-Minn.), while also criticizing Israel and proclaiming "Palestine should be free" on Twitter.

But while Alex Trebek won't decide the fate of the Middle East, the correct answer to the question he posed isn't a matter of trivia.

While much of the world agrees with Needle that Bethlehem is in Palestine, there is currently no such legally constituted nation.

Under the terms of the 1993 Oslo Accords, the Palestinian Authority autonomously governs most of the territory that is commonly known as the West Bank, where Bethlehem is located. But Oslo did not grant the P.A. does sovereignty. Nor does it exert sovereign rule since Israel still maintains security control of the region. Final disposition of the area awaits negotiations that would, in theory, partition the land between the Mediterranean Sea and the Jordan River.

Repeated attempts at negotiations have been tried ever since the P.A. was established. Israel has made offers of independence that would have given the Palestinians an independent state in almost all of the West Bank, the Gaza Strip (now ruled as an independent state in all but name by the Hamas terrorist organization) and a share of Jerusalem in exchange for ending the conflict. Each time, the Palestinians have responded "no" to such proposals. The P.A., led by Mahmoud Abbas — who just entered the 16th year of the four-year term as president, to which he was elected in 2005 — is still unwilling to recognize the legitimacy of a Jewish state no matter where its borders are drawn.


So rather than conclude peace with Israel, the P.A. has tried an end run around negotiations by asking the United Nations and other governments to recognize the existence of a State of Palestine that doesn't exercise the authority of a state. That's why it isn't actually a member of the United Nations, though the Palestinians have a delegate there and at many of the world body's agencies. Needle's answer notwithstanding, Bethlehem cannot be considered part of state that has no sovereign rights or legally agreed-upon borders.

But neither was her fellow contestant correct when he said "Israel" since the Jewish state doesn't actually claim it to be part of its territory. It is instead part of territories that are disputed.

The area is often wrongly termed as being part of "Palestinian lands" or "Palestinian territories." However, there has been no fully recognized sovereign nation there since Great Britain governed the entire country under a Mandate for Palestine granted it by the League of Nations in 1922 as part of its promise to help develop a "national home" for the Jewish people. Before that, it was governed by foreign conquerors such as the Turks and their Ottoman Empire. At no point in prior history was there a Palestinian Arab entity or state exercising sovereignty in any part of the country.

Bethlehem was illegally occupied by Jordan from 1949 to 1967, and came into Israel's possession in June of that year in a defensive war. Its right to the territory is just as valid as that of the P.A. But unless and until the Palestinians finally decide to make peace, it will remain in legal limbo.

Those who wish for Needle's answer to be considered correct should stop tweeting at Trebek or casting aspersions at Billy Wisse. Instead, they should direct their criticism at the Palestinians. As long as they remain unwilling to accept the existence of Israel, there will be no two-state solution to create a real state of Palestine.

In fact, it is now just as accurate to say that Bethlehem is in Judea. That was the biblical name of the region that was widely used throughout history to describe that part of a region the Romans renamed Palestine in order to try to erase its Jewish identity.

If the Palestinians want the existence of a state of Palestine to be recognized, they must choose peace and stop trying to expunge the Jewish history of the region. Until that happens, Bethlehem will remain as stateless as a Palestinian people that seem unable to give up their war on the Jews.