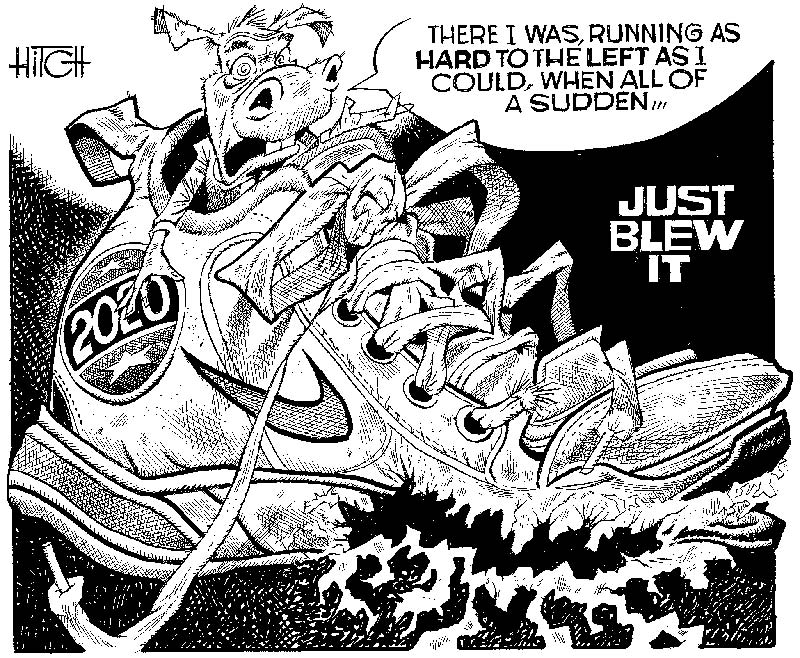 The most substantively outrageous presidential campaign in American history has some Â­serious chance of success.

Bernie Sanders is leading or near the top of most polls in the first two Democratic nominating states of Iowa and New Hampshire. He could plausibly win both, which would instantly transform the race into an ugly, desperate effort to Stop Bernie.

Sanders doesn't exactly get good press. A lot of the punditry (understandably) wrote him off when Elizabeth Warren eclipsed him in the polls a couple of months ago and he had his health scare.

Longer profiles have tended to be fond, while expressing skepticism that Sanders can build out his coalition. But the same people who have spent years worrying about norms — by which they usually mean things President Trump says and tweets — express little alarm about Bernie's jaw-dropping radicalism.

If he had his way, the Vermont socialist would fundamentally change the character of the country. He would make the United States an outlier in the Western world, not in terms of its relatively limited government, but its sweeping activism. A Hellfire missile aimed right at the federal fisc, Sanders would make President Barack Obama's economic agenda look like the work of a moderate Republican.

In foreign affairs, he would bring a sympathy for US enemies not often heard outside academia or Noam Chomsky reading groups.

He is the American Jeremy Corbyn, a socialist true-believer whose fantastical agenda reflects the dictates of dogma. The difference is that Corbyn effectively promised a return to socialist-imposed stagnation in Britain, whereas Bernie is Â­inviting America to experience it for the first time.

His domestic program, according to Brian Riedl of the Manhattan Institute, would cost nearly $100 trillion over the next decade. It would more than double federal spending and blow past Western European social democracies in government spending as a percentage of GDP. What would ordinarily be considered ambitious spending plans — his proposed increased expenditure expansion on Social Security, infrastructure, housing, education and paid family leave — are dwarfed by his gargantuan commitments to Medicare for All, his federal job guarantee and his climate plan.

Sanders talking points trash Warren for 'bringing no new bases' to Dems He'd fundamentally transform the relationship of the individual to the state, which, among other things, would ban people from owning their own health insurance.


Sanders pitches his health-care proposal as "what every other major country on earth is doing," but no other place is as sweeping or as generous. "There is not a single country in the world," health-care analyst Chris Pope writes, "that offers comprehensive coverage with an unlimited choice of providers, fully paid for by taxpayers, without insurer gatekeeping, service rationing or out-of-pocket payments."

He would drastically boost taxes, and still fall short of funding his program. As Riedl notes, he'd boost the top federal income-tax rate to 52 percent from 37, and the payroll tax rate to 27.2 from 15.3, as well as impose a 62 percent investment tax rate on upper-income taxpayers.

His foreign policy bears the stamp of soft spots for the Communist regimes in Nicaragua and the Soviet Union. He called the killing of Soleimani an assassination and didn't bother with any denunciations of the vicious terror master-mind. He condemned the ouster of Bolivia's leftist autocrat Evo Morales, who has called Sanders his "brother." He won't call Venezuelan strongman Nicolas Maduro a dictator but slams Benjamin Netanyahu as a "racist." He has said his vote to authorize the war in Afghanistan after the 9/11 attacks was a mistake.

Sanders does indeed have his charms. He's sincere, consistent and inarguably himself. He now has a step on frenemy Elizabeth Warren in the leftist lane in the primaries because he isn't as painfully calculating as she is.

But make no mistake: Sanders is a socialist continuing his takeover attempt of the Democratic Party to forge what he aptly calls a political revolution. He may be more polite than Trump, but he is wildly outside the mainstream and a clear and present danger to the public welfare.