Iran's options in showdown with America are all bad 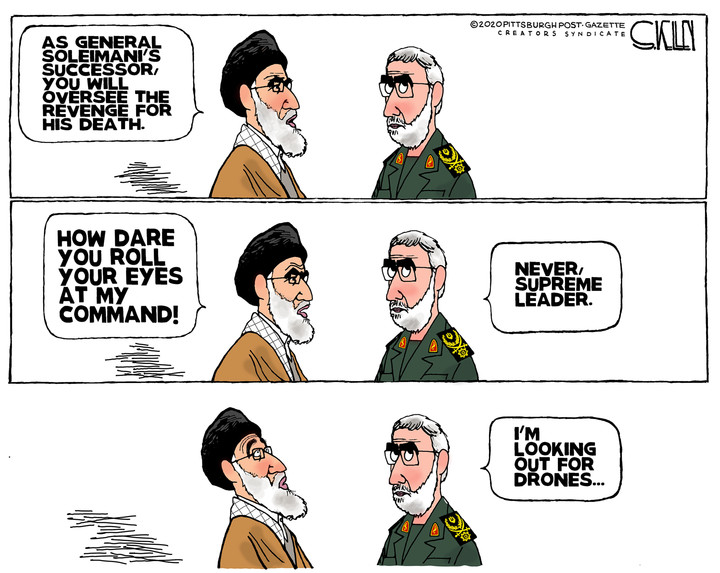 After losing its top strategist, military commander and arch-terrorist, , the Iranian theocracy is weighing responses.

One, can quiet down and cease military provocations.

After attacking tankers off its coast, destroying an oil refinery in , shooting down a drone and being responsible for the killing and wounding of Americans in , could now keep quiet.

It might accept that its strategy of escalation has failed to lead to any quantifiable advantage. Trump did not prove a passive "Twitter tiger," as his critics mocked. Instead, he upped the stakes to disadvantage and existential danger.

The chances, however, for such a logical and passive readjustment by are nil.

believes that Trump's beefed-up sanctions have all but destroyed its economy and could now extend to secondary boycotts of nations trading with . sanctions have also squeezed Iranian expeditionary efforts to forge a permanent hegemony and a Shiite crescent extending to the Mediterranean.

If unchecked, American economic pressure could eventually lead to a popular rebellion that would topple the theocracy. In sum, a return to the status quo is unlikely.

Two, can agree to re-enter talks about its nuclear program and offer a few concessions.

could concede that the prior agreement was designed to bank Iranian cash and nuclear expertise that would eventually lead to the country developing nuclear weaponry after a period of feigned good behavior.

Yet a return to direct negotiations with is also unlikely, especially since once enjoyed a lopsided gift from . Renegotiating anything less would be too humiliating for the revolutionary regime to endure.

Three, can escalate its military operations and its use of terrorist surrogates. The death of Suleimani is most grievous setback in decades, and seeks vengeance.

The theocracy will view his death not just in terms of a strategic loss, but as a humiliation that cannot stand. Governments elsewhere in the are gloating over Suleimani's killing, and especially over the thought of inability to do much about it.

In reaction, could strike American bases and allies in the region. The possibilities are endless. It might send more drones and missiles against other nations' refineries. could shower Israeli cities with missiles. might close the in hopes of seeing the rest of the world suffer as it has.

could also unleash its terrorist appendages to stage attacks on American and Israeli assets throughout and the , including military bases, airliners and soft civilian targets.

Yet this choice is also unlikely.

The would not have to invade to end it as a modern state. A strike against the or its overseas military installations would result in a devastating response. The theocracy knows that in hours, air power could take out all of oil refineries, power stations and military bases while suffering few if any causalities.

Given oil independence and the global adjustments to existing sanctions on Iranian oil, the near-permanent loss of oil would not greatly damage the world economy.

will bluster and threaten, but waging an all-out war with the would be suicidal, and knows it.

Four, can continue its periodic attacks on allies and on troops and contractors in the region.

Constant provocation is a not a good alternative, but it's probably seen as preferable to the other poor choices. The strategic aim in such endless tit-for-tat would be to wear down the patience of the public in an election year.

Given the quick criticism of Suleimani's killing from Trump's progressive domestic opponents, and given the Obama administration's past appeasement in response to Iranian provocations, might conclude that a hit-and-pause strategy is preferable.

It could incite Trump's political opponents to brand him a warmonger who acted illegally by "assassinating" Suleimani.

hope would be that Trump would lose the support of the antiwar members of his base in key swing states.


If such periodic attacks continued until , might hope for a President or President . Either one would likely resurrect the flawed deal and ignore Iranian aggression in and .

goal might be something like re-creating the melodrama of the 1979-1981 hostage crisis, rope-a-dope strategy, or three-month bombing campaign in . hopes for American strategic ossification that could prove politically toxic.

But that scenario, too, is unlikely. As long as Trump replies with air power disproportionate to any Iranian attacks, he, not , governs the tempo of the confrontation.

created the current crisis. It has choices, but for now they are all bad.