The high price of 'unity' in the anti-Trump resistance 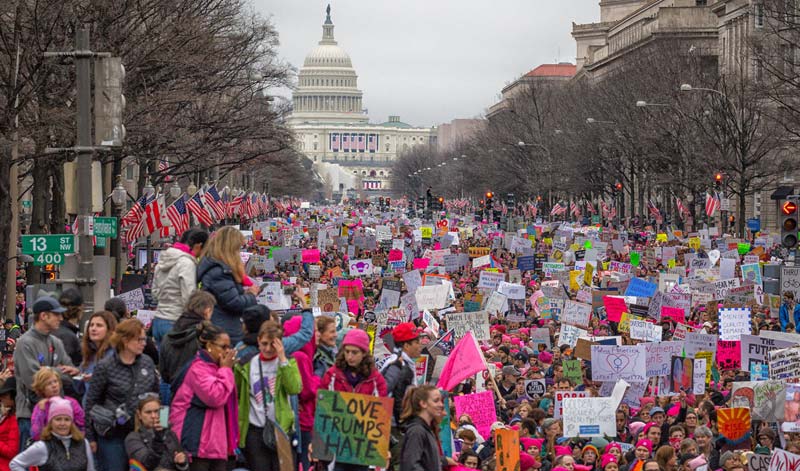 It ought to be possible to dislike and even fervently oppose U.S. President Donald Trump without having to associate with supporters of hatemongers like the Nation of Islam's Louis Farrakhan. Nor should it be necessary for his critics to embrace those who champion hatred for Israel and a BDS movement that is saturated with anti-Semitism.

Yet that is the choice being presented to those who are appalled by the Trump's statements about women or even those who just dislike the conservative policies he embraced once he started running for president. The Women's March was the group that organized the initial massive protest against Trump the weekend of his inauguration and subsequently became the primary focus of "resistance" activism. It is leading another march this month, but those who join it cannot pretend that doing so is merely a gesture of support for women's rights or even of opposition to the president. Led by people like Tamika Mallory, an open supporter of Farrakhan, and Linda Sarsour, a leading backer of the BDS movement who has attacked pro-Israel women, the group cannot pretend that its activities are merely an affirmation of the rights of women or a gesture of protest against Trump.

That's been a difficult pill to swallow for many in the Jewish world who were happy to embrace the multicultural leadership of the march as a necessary corrective to a political environment and a president that seemed to have little respect for women's rights. You didn't have to identify as a "progressive" to be offended by some of what Trump had said about women. And as the #MeToo movement took off in 2017, speaking up against both sexism and sexual violence became a national priority.

Moreover, those who view Trump as an existential threat to democracy believe that taking to the streets to demand his ouster is an imperative. To his opponents, Trump isn't just another Republican who can be both mocked and demonized in the way that President George W. Bush was attacked more than a decade ago. He has become, to both friends and foes, a transformative figure that has changed our political culture and become, in effect, not merely a source of controversy but, literally, the only issue many people think is worth arguing about.

So in that context, perhaps it's not surprising that there are still a significant number of Jews who are planning on joining the Women's March demonstrations, despite ample evidence of its leadership's attitude towards Jews and Israel. Tamika Mallory, president of the March, has been an outspoken supporter of Farrakhan, showing up at his events to cheer him on. Though in the days before the next round of events she said she opposed anti-Semitism, she refused to condemn Farrakhan when given the chance to do so on ABC television's "The View."

Linda Sarsour, another leader of the Women's March, has also been attempting to position herself and her group as opposed to Jew-hatred. But expecting us to believe in her sincerity when she's an ardent supporter of BDS who believes that the one Jewish state on the planet should be eliminated is a bit of a stretch. She's also the person who asserted that Zionist women had no place in their marches or even in any forum dedicated to women's rights.

All of this has put progressive Jewish women in a bind. The question they must answer is not just whether they think Trump is terrible, but whether the debate about his fitness for the presidency is of such a crucial nature that it must cause them to ignore the rising tide of anti-Semitism that has swept across the globe in the last decade.

Thankfully, many, if not most, liberals have shown the ability to think clearly about this question. That's why a growing number of Jewish groups, synagogues and individuals have disavowed the group led by Mallory and Sarsour. The same is true of secular groups, like the Democratic National Committee and the Southern Poverty Law Center. Whether they have done so out of expediency or principle is irrelevant. By stating that they cannot make common cause with individuals who embrace hate, those who have distanced themselves from the Women's March have made it clear that disliking Trump doesn't give anyone a pass for anti-Semitism.


But we shouldn't be entirely surprised that many Jews on the left have nonetheless concluded that their place is alongside Mallory and Sarsour. Some have done so because they consider disqualifying the group because of anti-Semitism to be an act of "white privilege."

The problem here isn't just that some Jews can't see beyond the argument about Trump. It's that support for intersectional ideology compels its adherents to devalue the rights of Jews because Israel and its supporters are erroneously portrayed as oppressors. That they do this even as they falsely accuse the president of destroying democracy and anti-Semitism makes this formulation doubly ironic.

If, like members of groups like Jewish Voice for Peace or IfNotNow, you believe that the war on Israel's existence is linked to the struggle for American civil rights, then you are prepared to do anything—up to and including validating or even advocating anti-Semitism—in order to justify solidarity with those who resist Trump.

As troubling as this debate has been, the abandonment of the March by so many liberals is an encouraging sign that the destabilizing aspects of the arguments about Trump have not robbed everyone of their last shred of sanity. Yet as long as intersectional arguments are treated as respectable opinion rather than excuses for justifying hate, the growing ability of radicals like the March's leaders to assert political leadership roles will ensure that this won't be the last time mainstream figures are going to be compelled to choose between progressive unity and opposition to anti-Semitism. If Mallory and Sarsour remain important figures on the left, rather than dismissed as outliers with as little influence as Farrakhan, the threat of leftist anti-Semitism in America will continue to grow.