BDS bill debate is about anti-Semitism, not speech 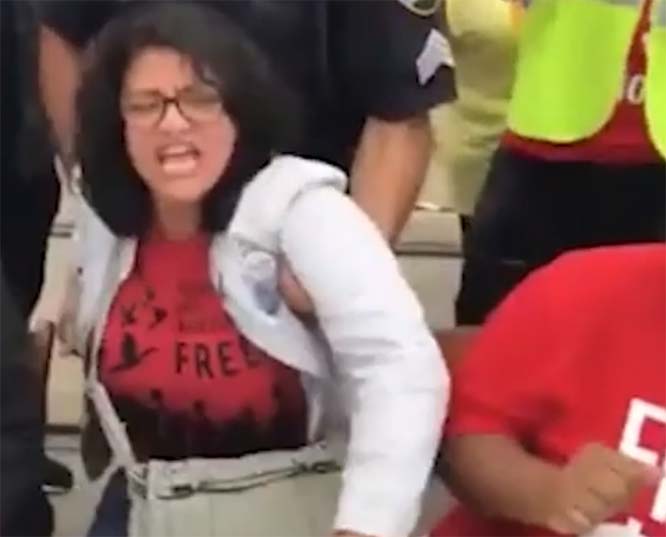 Tlaib at a protest, getting arrested.

Is the effort to combat the BDS movement much ado about nothing?

Given the abject failure of the campaign to boycott, divest and sanction Israel to harm the economy of the Jewish state or even to get American universities to endorse their efforts, there are those who consider all the fuss made about the issue a mistake.

Much of the organized Jewish community has been treating the battle against BDS as a priority. That includes an effort geared towards lobbying state legislatures and now the U.S. Congress to pass laws that prevent those complying with such boycotts from doing business with the government.

Critics see this as a waste of time that gives the BDS camp too much credit and far too much attention. Even worse, some see the push against BDS as doing real damage to the pro-Israel cause since they believe that support for measures that are viewed by some liberals as an attack on free speech is bound to not only fail, but will also help alienate younger Jews. They argue that the focus on BDS is likely to help convince this demographic group, where support for Israel is already faltering, that being pro-Israel is incompatible with being a progressive.

Yet the answer as to why BDS matters is being provided by one of its most prominent advocates: Rep. Rashida Tlaib (D-Mich.). Tlaib has been in the news of late as a rookie congresswoman who has been making quite a splash in her first weeks in Washington.

She became a hero to the anti-Trump "resistance" by saying in a speech that she promised," We're gonna impeach the motherf*%&*#er" when referring to the president. The comment earned her rebukes from even some mainstream voices for language that lost her party the high ground in the debate about civility. But it endeared her to her party's base, which is hungry for politicians who will wage war on Trump and the Republicans.

The Palestinian American from suburban Detroit also got publicity for the map in her new office that was altered to label Israel as "Palestine." Given her statements opposing a two-state solution to the Middle East conflict, it was hardly a surprise to learn that she favors wiping the Jewish state off the map, literally and figuratively. But her contribution to the debate about anti-BDS laws illustrated the link between BDS and anti-Semitism.

Responding to a tweet by Sen. Bernie Sanders (D-Vt.) opposing the anti-BDS bill on free-speech grounds and because Democrats are against considering any measures not related to ending the current government shutdown, Tlaib unleashed her vitriol on the bill's supporters.

"They forgot what country they represent. This is the U.S. where boycotting is a right & part of our historical fight for freedom & equality. Maybe a refresher on our U.S. Constitution is in order, then get back to opening up our government instead of taking our rights away."

Of course, it's legal to boycott anything you don't like. Just as no one can or should be prevented from speaking out against Israel. Even the most vicious anti-Semitic libels are legally protected when it comes to free speech, provided they aren't linked to violence. But organized commercial boycotts rooted in bias are illegal. BDS is a campaign of discrimination against the one Jewish state on the planet and therefore anti-Semitic by definition.

But in case the obvious link between anti-Semitism and BDS went unnoticed, Tlaib reminded us of this with her dual-loyalty smear by talking about "what country" supporters of the bill are representing.

This invocation of a traditional meme of Jew-hatred — that Jews are not loyal citizens of the countries in which they live — was too much even for some who share her antipathy for Trump. The Jewish Democratic Coalition condemned it as "offensive." The Anti-Defamation League agreed. So did the American Jewish Committee, which rightly pointed out the hypocrisy of someone who has more or less wrapped herself in the Palestinian flag, criticizing supporters of Israel.


The point here is that Tlaib's comments matter for the same reason that BDS is important. BDS is a flop with respect to isolating Israel — a nation with a booming First World economy, and growing ties even in the Arab and Muslim world, as well as in Africa and Asia, places where it was once shunned. But in spite of its lack of success, BDS has lent a measure of false legitimacy to those who would engage in anti-Semitic rhetoric. BDS is worth fighting because its real target isn't Israel, but American Jews and their right to stand up for their beliefs without fear of insult and intimidation.

As we've seen on college campuses, wherever the BDS movement raises its banners, acts of anti-Semitism follow. So it should surprise no one that in a debate about banning discriminatory commercial conduct aimed at Jews and their state, opponents would choose to play the "dual-loyalty" card.

The question now is not the future of the anti-BDS bill. Passage may be stalled by the standoff on the government shutdown. But once that is resolved (something that may not happen for a long time given the unwillingness of Trump and his opponents to compromise), it's likely that the bill may pass with bipartisan support since many Democrats, as well as the Republicans, support it. Indeed, Tlaib may have pushed some Democrats who were wavering into supporting it.

The ensuing issue is whether Tlaib pays any sort of price for her use of anti-Semitic invective. It remains to be seen whether her status, along with her fellow pro-BDS colleague, Somali American Rep. Ilhan Omar (D-Minn.), as a young Democratic rock star and a symbol of the fight against the president is so strong that not even open anti-Semitism will cause the party to avoid censuring and abandoning her. If not, the country will have taken another step towards a partisan abyss of hate that should be deplored, no matter what you think about Trump.