If Alexandria Ocasio-Cortez were a conservative 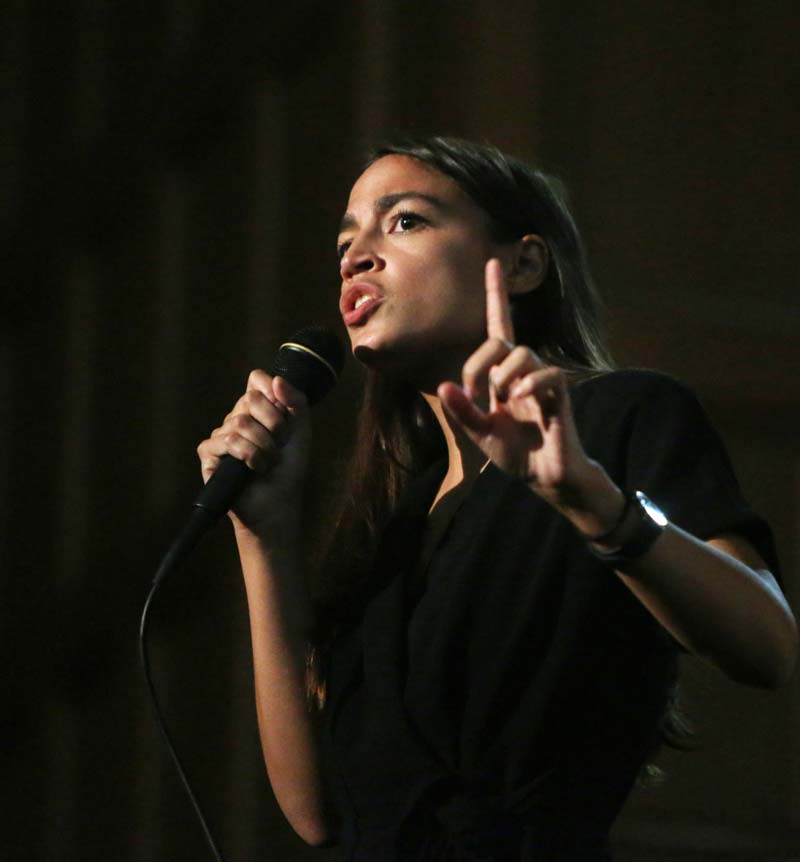 If Rep. Alexandria Ocasio-Cortez, D-N.Y., were a conservative, all anyone would be talking about is how uninformed she is.

She would be facing trick questions from reporters designed to expose her lack of knowledge, and brutal sketches on "Saturday Night Live" mocking her intelligence and fitness for office.

Instead, SNL fawns over her, while CBS's "Late Show" host Stephen Colbert -- far from making jokes at her expense -- eats ice cream with her and asks how many and "f -- s" she gives about her critics.

Boy, it's good to be a socialist.

It's not that there is a lack of material.

This week, for example, Ocasio-Cortez declared that "the world is going to end in 12 years if we don't address climate change."

She has said that $21 trillion in "Pentagon accounting errors" could pay for most of her massive $32 trillion Medicare-for-all plan -- as if there were $21 trillion in unspent tax dollars sitting around in a Pentagon vault.

She opined that "just last year we gave the military a $700 billion dollar budget increase, which they didn't even ask for" -- unaware, apparently, that the entire Pentagon budget is $716 billion.

She has declared that "unemployment is low because everyone has two jobs" -- which is flat untrue. According to the Bureau of Labor Statistics, there are only 6 million to 7 million Americans with two jobs and 148 million with just one.

Those are examples of ignorance. But apparently she is also dishonest.

This week, she told Colbert that she has not been able to open a district office yet to handle constituent casework because of the federal government shutdown. "There's a lot of things we can't do as freshman members," she said. "We can't properly set up our district offices. We can't get laptops delivered. We can't start doing the work that we were elected here to do. â€¦ It takes the green stuff. And those workers are furloughed."

Last September, Congress passed the 2019 Legislative Branch Appropriations bill, which funds congressional salaries and offices for the coming year. Ocasio-Cortez knows this because, unlike furloughed workers, she is getting paid.

The New York Times reports that the three other first-term members from New York have managed to open offices in their districts. A more likely explanation is that Ocasio-Cortez is spending her time building her national media profile instead of taking care of the constituents who sent her to Washington in the first place.

So where are the articles bemoaning "The incredible, thuggish stupidity of Alexandria Ocasio-Cortez"? Where are the journalists trying to trip her up with questions like "Do you agree with the Bush Doctrine?" to see if she knows what it is? Nowhere to be found.

To their credit, the fact-checkers have been on the case. PolitiFact gave her unemployment claim a "Pants on Fire" rating, and she is rapidly accumulating a large cache of Washington Post Pinnochios -- so much so that she claims to be the victim of "false equivalency + bias."

She told CBS's "60 Minutes" that "being morally right" is more important than "being precisely, factually ... correct." Apparently, facts matter less as long as you support Big Government.

But facts are crucial, especially when you are proposing the largest increase in government spending in human history. Vox recently added up the cost of all her proposals -- from Medicare-for-all, to free college, guaranteed jobs and the "Green New Deal." The price tag was $42.5 trillion over the next decade -- more than twice the current national debt. Sorry, you can't pay for that through Pentagon accounting errors.

It is a tremendous testament to America that someone who was working as a bartender in a Mexican restaurant a year ago can throw their hat into the ring, unseat a 10-term member of Congress and be elected to the House of Representatives. It's what makes this such an exceptional nation. And it is obvious that she has political talent. But that doesn't excuse her from the responsibilities as a legislator to learn the facts and serve her constituents. Even Whoopi Goldberg, an Ocasio-Cortez supporter, warned her on "The View," "I would encourage you to sit still for a minute and learn the job."

That's good advice. Once people decide you are ignorant, it's hard to recover -- just ask Sarah Palin or Dan Quayle. Of course, they were conservatives, so the standards are different.