The Drumbeat of the Mob 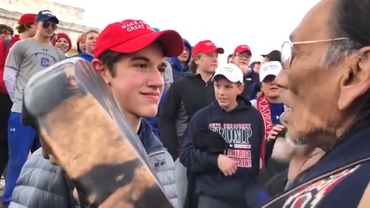 Another hate crime that wasn't - brought to you by the rubes of Conservative Inc.

Guest-hosting for Rush Limbaugh on Friday, I mentioned the strange need of the right to virtue-signal to their detractors - as in the stampede of Congressional Republicans to distance themselves from their colleague Steve King over an infelicitous interview with The New York Times. Democrats never do this; Louis Farrakhan and his Nation of Islam declare that the Jews are pushing defective marijuana on black men in order to turn them gay - which would appear to be a prima facie slur on at least four Democrat constituencies: blacks, gays, Jews and potheads. Yet Clinton, Obama et al speak not a word against Calypso Louie.

There was another conservative virtue-signaling stampede over the weekend. A short video from the Lincoln Memorial went "viral" (notwithstanding its ubiquity, I'm keeping the word in scare-quotes because, like any other virus, this one should be contained): it purported to show a group of Catholic schoolboys in MAGA hats harassing an elderly Native American drummer. The lads were instantly identified as students from Covington Catholic High School, which I'd never heard of but is clearly the kind of tony white-privilege joint where they book Brett Kavanaugh to spike the punch at the gang-rape prom. So naturally social media instantly convicted them and moved on to the usual doxing and death threats. The school itself leapt to dissociate itself from its own pupils and threatened to expel them.

Midst the present fevers, my advice and practice is that, when the media are in lockstep on a particular "narrative", proceed with caution and, if you must join the great thundering herd of independent minds, tag along at the tail end out of sight. A genuinely conservative temperament should be wary of crying "Me too!" and scampering after the media-Democrat-cultMarx bandwagon - if only because, regardless of the wrongs and rights, no true conservative should assist in furthering the nano-second due process of trial by social media, through which whole lives are destroyed by the reflex twitching drive-thru jury of Twitter. "Sentence first - verdict afterwards," said Alice's Queen. Hang him high - and we'll figure out later what, if anything, he's guilty of. That's about as deeply unconservative a proposition as one could find. The cure is worse than whatever disease (racism, sexism, transphobia, Islamophobia) it claims to be healing.

Yet, instead of a prudent skepticism, my former colleagues at National Review joined the stampede and decided to get way out in front of the story. My old friend Jay Nordlinger was anguished:

The images of those red-hat kids surrounding and mocking that old Indian are unbearable. Absolutely unbearable. An American disgrace.

Of course, the virtue-signaling availed him naught from fellow Tweeters. Alex Natt:

National Review decided to up their game and published a piece by their deputy managing editor, Nicholas Frankovich (presumably the assistant to Jason Lee Steorts), with the arresting headline:

Unfortunately for the scolding schoolmarms of the right, the facts were not as they appeared to be from that brief clip. Over at Reason (with hindsight, a better name for a magazine than I used to think it was), Robby Soave watched the two hours of surrounding footage, and found - surprise, surprise! - that it told an entirely different story:

They call them crackers, faggots, and pedophiles. At the 1:20 mark (which comes after the Phillips incident) they call one of the few black students the n-word and tell him that his friends are going to murder him and steal his organs. At the 1:25 mark, they complain that "you give faggots rights," which prompted booing from the students. Throughout the video they threaten the kids with violence, and attempt to goad them into attacking first. The students resisted these taunts admirably: They laughed at the hecklers, and they perform a few of their school's sports cheers.

Under sustained crude and obnoxious provocation, the boys were remarkably good-humored throughout - a credit to the school that threatens to expel them.

Halfway through, Jay's "old Indian" decided to insert himself in between the Black Hebrew Israelites and the MAGA cracker-faggot-paedo schoolboys, and start his "Native American drumming". A little ethnic drumming goes a long way with me. Have you ever heard that Japanese taiko drumming? It's not exactly Buddy Rich. So I wouldn't welcome someone doing it in my face, and needless to say, if a white male drummer (from the Edinburgh Tattoo, say) went up to some black kids and started drumming, it would be a hate crime.

Nathan Phillips, on the other hand, is a revered tribal elder - so revered he plays one in a "music" video that has 380 million hits (best to hit the mute button before pressing play):

Almost nothing about this story is as reported. Jay Nordlinger's "old Indian" isn't that old: he was born in 1955, which, not to be ungallant or anything, puts him in slightly-older-brother territory to Jay - who has known some seriously old men, like the recently departed Bernard Lewis, born 1916. Nathan Phillips seems to be some sort of Native American version of Quaker Oats pitchman Wilford Brimley, who's been playing old since Cocoon in 1985, when he was barely fifty yet was cast as a contemporary of Don Ameche, Hume Cronyn, Jack Gilford and other chaps three decades his senior. In fact, Steve Sailer wonders if Nathan Phillips is, in fact, a "Vietnam vet", at least in the quaint and possibly obsolescent sense of having been in the vicinity of Vietnam while wearing a military uniform. All US forces were withdrawn in March 1973, when Mr Phillips would have been either a few weeks past his eighteenth birthday, or still seventeen and in drum school.


Curious. But, as the appellate judges say (hey, welcome to my world), we need not reach the merits of Mr Phillips' antiquity, because long before that question arises the official media narrative turns out to be thoroughly bogus. This was just another fake hate crime - I believe you can do a Master's in them at Oberlin. My old boss at National Review, Rich Lowry, has deleted his Tweet, as has Jay Nordlinger (seconding Rich with a somewhat perfunctory "same here"), and the spit-on-the-Cross piece by their hysterical junior editor has disappeared from the website. By contrast, over at The New York Times, the in-house conservative, Ross Douthat, can rouse himself to no more than ecumenical scolding:

Good rules for life: Don't let your Catholic school's students wear MAGA hats on a field trip for the March for Life.

Don't *immediately* make a teenager a symbol of everything you hate about your political enemies based on a short video clip. Give it a day at least.

That doesn't quite do it for me. What's disturbing about this fake hate crime is not that the Twitter mob scented blood in its nostrils and went bounding after its prey, but that a big chunk of Conservative Inc piled on, as enthusiastically as the left. And Jay Nordlinger's finger-wagging about an "American disgrace" is absurd in its sanctimony: However you wish to characterize a professional tribal elder intervening in a showdown between upscale Catholic private-school pupils and "Black Hebrew Israelites", it isn't an "American" disgrace. An American disgrace is the declining life expectancy of white males due to addiction, or the collapse of the family in rural America, or a bipartisan political class admitting millions of unskilled illegal immigrants to the country so that MS-13 gangs are now a fact of life in suburban Long Island in order that the Dems can get voters and the GOP's donors can get cheap labor ...or any one of a ton of other "American disgraces" Conservative Inc doesn't talk about because it only takes to the field on the left's terms.

I talked on Rush last Friday about the folly, in philosophical terms, of always accepting your opponents' premises, even unto accepting and advancing the notion that "western civilization" is hate speech. How is that in the interest of even the most milquetoast and watery version of "conservatism"?

But accepting not just your opponents' framing of the argument but their most repulsive totalitarian rituals is even worse. The Orwellian Twitterstorm is something utterly disgusting: It reduces man to a cyber-jackal, feasting on whatever prey is tossed in his path. I have argued, at some length, that you cannot have truly conservative government in a liberal culture. Culture is like air - it's all around, and you don't even think about it. So we live in an age of social-media feeding frenzies that can vaporize a fellow's Oscar-hosting gig or drive an unfortunate porn actress to suicide. There is nothing in the least bit "conservative" about such a world: It's like the young student in Milan Kundera's great novel of Warsaw Pact totalitarianism, The Joke, facing the party committee and wondering why none of his friends will speak up for him - except that it's now at Spaceballs Ludicrous Speed, and the respectable right cannot even bring itself to forgo the pleasure of getting played for saps. Every time.