The hidden tax on middle-class vacations 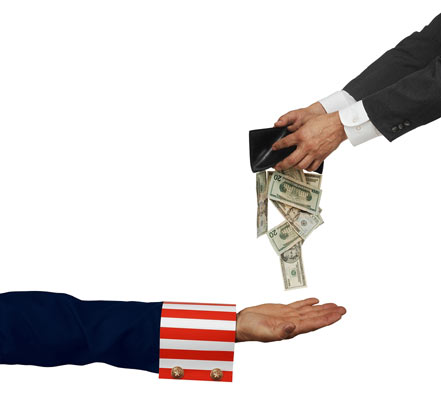 Massachusetts has joined the list of jurisdictions that seem to think there are too many darn tourists. Or maybe it just wants to price out budget-conscious summer renters, turning the season over to the rich. That's the message sent by the commonwealth's new law applying the state's occupancy tax to short-term rentals of private homes.

The transparent and unapologetic effort to protect the hotel industry against upstarts like Airbnb and VRBO has gained traction in states blue, red and purple. The idea is that the proverbial playing field must be leveled. Most states and many municipalities collect an occupancy tax based on the price of each hotel room. But low-end travelers have been fleeing the traditional hotel industry for sharing services that find them accommodations which don't have to pay the tax.

Now, in a growing number of states, they do.

What's wrong with that? In the first place, the simplest way to level the playing field would be to abolish the occupancy tax entirely. A few states manage without one. But persuading a government to eliminate a tax is like trying to keep a moth away from a flame: You are going against an irresistible urge.

In the second place, the urge to level the playing field proceeds from the assumption that the function of the state is to protect entrenched competitors against new entrants who lack their cost structure. Although the leading study makes clear that Airbnb and its imitators have a measurable if small effect on hotel pricing, the effect is heavily at the less-expensive end. Vacationers, not business travelers, are opting for private placements over hotels. Thus the result of the new regulation is to make vacation travel more expensive. At the margin, this is bound to have some effect on who travels.

But let's forget the online sharing services (which have generally been cooperating with state tax authorities) and consider who else is affected by many of these enactments: homeowners who've been renting to vacationers for years, often through advertising or real estate agencies. Now those owners all have to register with the state, for the ostensible purpose of ensuring collection of the tax. Anyone who doesn't think the state will in due time begin to use the list as an easy way to impose additional requirements ... isn't thinking very hard.

Who's covered? The Massachusetts law, by no means an outlier, is structured not as an income or sales tax but as an excise tax. It applies to everyone who rents a property for — get ready — less than a month at a time; more than two weeks a year; and more than $15 per stay. The state's share is 5.7 percent, but towns on Cape Cod, Martha's Vineyard and Nantucket can add 2.75 percent to be paid into a special "water protection fund," and every town is also free to add its own levy of up to 6 percent, which will flow into local coffers.

In other words, the tax can run over 14 percent of the rental fee. This may not sound like much, but for working-class vacationers who scrape all year to afford their summer rentals, the tax might be enough to keep them home. Yes, there are vacationers aplenty for whom the marginal utility of a dollar is a lot lower, but the state can't possibly believe that they'll be the only ones facing the tax.

So far, nobody seems to know which towns will collect how much, even though the tax goes into effect on July 1. Such confusion is hardly unusual. Many of the formulations adopted by various states include rules and exceptions that make no sense. Under New Jersey's recently adopted law, for example, if you own a home and rent it out during the summer, you can avoid the occupancy tax only by using a real estate agent and having your renters pick up the keys at the agent's office. If the keys are in a lockbox on the property, or if your renters pick them up from you personally, you're fully liable for the tax. But real estate agents handle a lot of summer rentals and probably have a powerful lobby.

What's the justification for all of this — aside of course from the appeal to states of a new stream of tax revenue?

One conceit of supporters is that "transient residents" (tourists and vacationers to the rest of us) use government services for which localities aren't compensated. If this is true, then perhaps the tax should be a fixed fee rather than a percentage of the rental. The cost to the state is the same whether a traveler pays $100 or $10. The alternative is to believe that those who pay more for accommodations also use proportionately more municipal services — a dubious proposition absent supporting data.

Besides, localities are already compensated — by the taxes paid by those who rent out their homes. Typically, even an out-of-state landlord pays local income tax on rental income. And an out-of-state landlord will certainly still pay property taxes. It's hard to see why the rented-out house requires more services than the owner-occupied house does.

Another difficulty with the occupancy taxes on those who rent out their homes is that, like most levies on rental income of individuals, they're highly regressive. Imagine two families, the Richlies and the Poorlies, who on the same day buy identical vacation homes in the same town for the same price. The only difference between the families is that the Richlies, being wealthy, can afford to leave the house empty when not using it, whereas the Poorlies, being middle class, need rental income to pay the mortgage. The Poorlies pay an occupancy tax and the Richlies don't. (An obvious solution would be to tax the Richlies on the imputed rent for owner-occupancy, but that isn't going to happen any time soon.)

Advocates say that short-term renters are gaining valuable rights and protections. But, curiously, they don't respect the autonomy of short-term renters enough to inquire whether they might be able to make a rational choice to sacrifice those protections in return for cheaper stays. Now and then, just for the fun of it, the state should trust us to make up our own minds.

Still, I will admit that I may have a bias here. I've been vacationing in Oak Bluffs for well over half a century. The once-sleepy town on the northern coast of Martha's Vineyard has been attracting middle-class black vacationers for twice that long. Weird how Massachusetts is now telling us that we've been underpaying for our rentals all these years.