Evidence mounting that US BDS groups are fronts for terror organizations 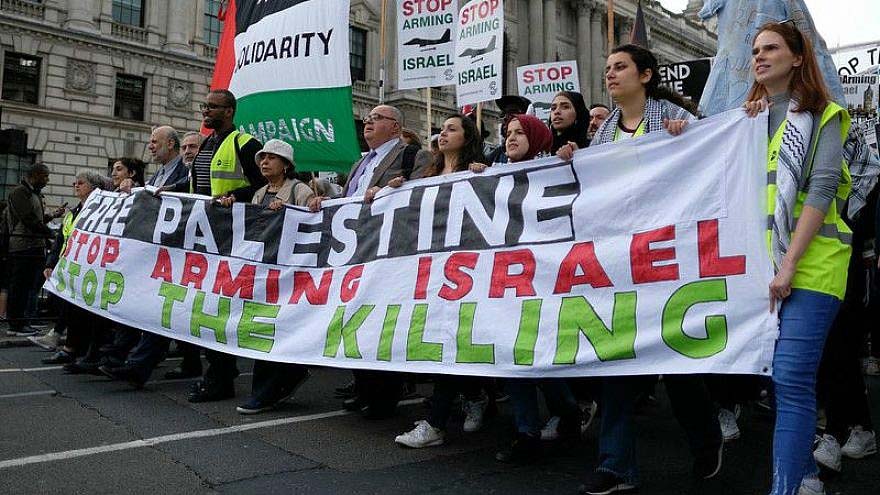 Over the past decade, the BDS movement has emerged as one of the principle challenges towards the legitimacy of the State of Israel. A modern distortion of the South African anti-apartheid campaign, the movement seeks to put economic pressure on Israel and to isolate it politically. While Israel continues to thrive on both fronts—with a booming economy and expanding relations throughout the developing world—the ongoing threat of boycotts remains a constant challenge, especially for pro-Israel advocates in the Diaspora.

At the same time, emerging evidence suggests that the BDS movement has extensive ties to Palestinian terrorist organizations. By using the "social justice" movement as a veritable human shield for anti-Israel ideology and activism, terror groups are now succeeding in a type of reputational and commercial warfare against Israel

This evidence has surfaced in a recent court case in Arizona, where for the first time a U.S. government body has formally acknowledged that the BDS movement aids actors engaged in terror.

In a brief filed by Arizona's Attorney General Mark Brnovich as part of a case before the U.S. Ninth Circuit Court of Appeals concerning his state's anti-BDS law, Brnovich noted that the BDS campaign was not only motivated by anti-Semitism, but that it aids Palestinian terrorist groups, including Hamas, as well as the Palestinian Liberation Organization, the latter of which provides payments and stipends to convicted terrorists or their families.

"That is particularly true as the effect, and often goal, of BDS boycotts is to strengthen the hand of the Palestinian Liberation Organization, which pays cash stipends to the families of terrorists, and its governmental coalition partner and terrorist organization, Hamas," said Brnovich.

Marc Greendorfer, founder of the Zachor Legal Institute, said the ties between BDS and terror organizations are "extensive."

"The ties are extensive and quite serious," he told JNS. "Some of the BDS groups, like Dream Defenders, send members to the Middle East to meet directly with terror groups like the PFLP [Popular Front for the Liberation of Palestine], and there has been testimony before Congress that financial backers of Hamas are also providing support to BDS groups. Further reports to Congress showed that the PLO has a āwar room' in Europe from which they coordinate and fund BDS groups in the U.S.," he explained.

Last year, the Zachor Legal Institute submitted a letter to the Department of Justice urging the U.S. government to open an investigation into the ties between Palestinian terror groups and several U.S.-based BDS groups, including American Muslims for Palestine (and its affiliated entity, Americans for Justice in Palestine Educational Foundation), Dream Defenders, the Muslim Students Association, Samidoun and Students for Justice in Palestine (SJP).

"We believe—and there is copious evidence to support the allegation—that these organizations are working with designated foreign terror organizations in the United States, often as part of the BDS movement to target Israeli companies, academics and institutions," Zachor stated in a memo provided to JNS.

"As part of our research into BDS groups, we developed reports on each of the groups we named in the letter and how they provide support for designated terror groups," he said. "The evidence comes from reviewing social media and other publicly available information, such as congressional testimony."

Greendorfer added: "Taken as a whole, the reports demonstrate that BDS groups have frequent contact with representatives of terror groups, disseminate propaganda from terror groups and are funded by terror groups."

Concern has been generating over links between terror and BDS groups for several years now.

In testimony before the House Foreign Affairs Committee in 2016, Jonathan Schanzer, who serves as senior researcher for the Foundation for Defense of Democracies, presented evidence of how former leaders of the Holy Land Foundation for Relief and Development, the Islamic Association for Palestine and KindHearts for Charitable Development—three organizations implicated in financing Hamas between 2001 and 2011—have gravitated towards a new organization called the American Muslims for Palestine.

"AMP is a Chicago-based organization that is a leading driver of the BDS campaign," Schanzer told lawmakers at the time. "AMP is arguably the most important sponsor and organizer for Students for Justice in Palestine, which is the most visible arm of the BDS campaign on campuses in the United States.

"The overlap of former employees of organizations that provided support to Hamas who now play important roles in AMP speaks volumes about the real agenda of key components of the BDS campaign," said Schanzer.

He noted that the IRS, unlike its European counterparts, pays only scant attention to the prior histories of Section 501 entities and their officers or directors, and he urged lawmakers "to look at legislating a more transparent disclosure process for charity employees and board members previously implicated in terror finance."

"Americans have a right to know who is behind the BDS campaign. And so do those members of the BDS campaign who may not fully understand its history," he told lawmakers.

Additionally, earlier this year, Tablet magazine uncovered how the U.S. Campaign for Palestinian Rights (USCPR), an organization that coordinates the efforts of 329 different pro-BDS organizations, helps to facilitate tax-exempt donations "to a Palestinian coalition that includes Hamas, Palestinian Islamic Jihad, the Popular Front for the Liberation of Palestine, and other groups the U.S. State Department designates as terror organizations."


According to the report, the USCPR is the "fiscal sponsor" of the Palestinian BDS National Committee (BNC), which is a Palestinian-based group that serves as the Palestinian arm of the BDS movement and helps to coordinate international BDS efforts. The BNC operates the website Bdsmovement.net that serves to educate and update readers on the BDS movement, as well as allow for American supporters to make tax-deductible donations to the group through the Education for Just Peace in the Middle East, a 501(c)3 charitable organization linked to the USCPR.

In its memo provided to JNS, Zachor Legal Institute noted that a group called the Palestinian National and Islamic Forces (PNIF), a founding member and current managing entity of BNC, includes as members five organizations designated by the United States as foreign terror organizations, as well as the PLO.

One organization that evinces the ties between BDS and terrorism is a group called Samidoun, points out Greendorfer.

"While other BDS groups like SJP tend to have layers of obfuscation between their operations and the terror groups, Samidoun appears to act as a direct proxy for the PFLP," he said.

According to Greendorfer, two of Samidoun's leaders (Khaled Barakat and his wife, Charlotte Kates) are also PFLP members, with Barakat being the head of PFLP's foreign operations. Other Samidoun officials, like Mohammed Khatib and Mustafa Awad, are also PFLP members. Samidoun members also have close ties to Hamas, and Hamas's chief of security (Tawfeek Abu Naim) in particular. Furthermore, Samidoun members such as Sayel Kayed is also a board member of another BDS group, American Muslims for Palestine, and Lamis Deek, another Samidoun member, is a board member of Council of American Islamic Relations (CAIR) (an unindicted co-conspirator in the funding of Hamas).

"While Samidoun is not the most visible promoter of BDS, they definitely are active in BDS, especially behind the scenes," said Greendorfer. "Samidoun is a perfect example of a BDS group that operates in the U.S. having direct ties to terror groups, as well as involvement in sister BDS organizations."

Urging the U.S. government to investigate

While Israel continues to see trivial effects from the BDS movement, supporters of Israel in North American and Europe face a more challenging situation. This is especially true on college campuses, where pro-Israel and Jewish students confront mounting boycott challenges from fellow students and even faculty .

Similarly, concern is growing as well for bipartisan support for Israel with the election of several new congress members who openly support the BDS movement.

"BDS is a proxy for foreign terror groups, and it is becoming increasingly popular with the American left," said Greendorfer. "BDS promotes discrimination and normalizes the message of terror groups by cloaking it in the vernacular of civil rights. It is a mistake to take BDS lightly. The most important thing that the pro-Israel community can do is to spread the facts that BDS is discriminatory, a front for terror and is the nonviolent arm of terror groups whose ultimate goal is to disenfranchise Jews from their right to their own country."

As such, Greendorfer said that his organization has resubmitted its letter to investigate BDS groups to Acting Attorney General Matthew Whitaker and will also urge nominee William Barr to do the same once confirmed.

"We have been able to obtain copious evidence of the ties between BDS and terror, but we don't have the power to actually investigate BDS groups to find how deep the terror ties are," he said. "Only government has that power and we have provided the DOJ with more than enough evidence to start an investigation."