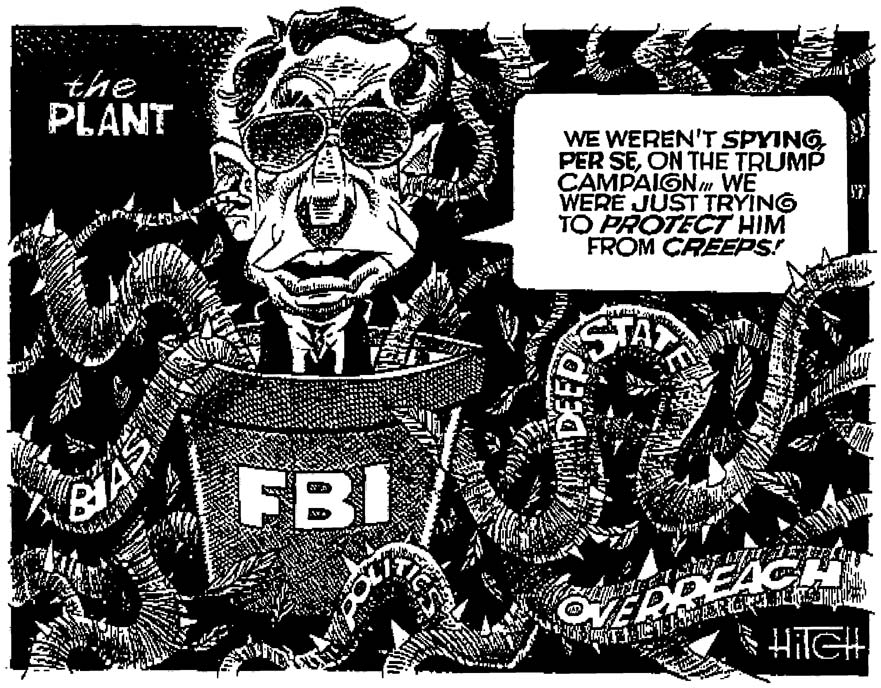 We've long known, haven't we, that federal bureaucrats increasingly run the American show. But did we expect an FBI investigation that stepped out of bounds to see if our president was a Russian agent? Such a heinous crime, if true, could obviously spell his end, but such a probe is a slur on democracy.

As a matter of separation of powers, Congress can do it, yes, but the FBI needs actual hard evidence of a crime to proceed. Otherwise, what we have on our hands is an agency that can search out pretty much any soul it wants whenever it wants, the sort of thing you get in tyrannies. If you dislike a leader, someone whose politics you find threatening, for instance, then search here, there and everywhere for something foul.

According to the New York Times, which broke the story, the instigating factor was President Donald Trump firing FBI director James Comey. This was seen as just maybe obstruction of justice, a means of ending any further explorations of Russia interference with the 2016 presidential election. But, first off, the president had the right to fire the guy. Second, the Department of Justice itself said he deserved as much for one haughty transgression after another. Third, the investigation continued. Nothing was obstructed.

What is more, the Times story tells us, there has been no revelation of Trump yapping in secret with Russian agents or of his scooting along in designated directions. If there is an implicating fact or dozens, how about letting them loose as a replacement for guesses and prejudice. Sadly, the Department of Justice is keeping them in a cage where they are unlikely to infect the rest of us with truth.

So worry, please worry, worry a lot because, for one thing, Congress has allowed an ever more powerful administrative state in which prohibitions can often come in second to bureaucratic druthers. For something else, consider that some big-brother intelligence agents have likely committed felonies by leaking classified information never exactly making Trump look sane or decent or trustworthy. Consider that, even during the election campaign, you had intelligence agency bigwigs plotting how to handle this character they feared, checking out this, that and the other in suspect ways.

The Department of Justice has meanwhile played games with congressional oversight. Partisan, get-Trump advocates were part of what was supposed to be an unbiased special counsel probe. The FBI seemed to depend a lot on a fraudulent Russian document that may have been employed illegally. Then there were the blindfolds strapped on when looking at the Hillary Clinton campaign organization and the Clinton Foundation.

The FBI investigation was short-lived because then we got the investigation by special counsel Robert Mueller, who has spent 20 months and $25 million driving the all-powerful federal government bulldozer to smashes aplenty. The thing is, there are all sorts of questions about its validity, and so far the smashes have seemed mostly irrelevant to the probe's central point. We'll have reports soon. They will either be killers or nothing much, according to different leaks the Mueller team denies having made.

It also seems the case that the Democratic controlled House is prepared to eschew a lot of time-wasting public policy questions to focus on probing Trump until the 2020 election is decided for good. Something real could be there, but chances are not bad that this will be the equivalent of another government shutdown showing Trump's foes can be worse than he is.